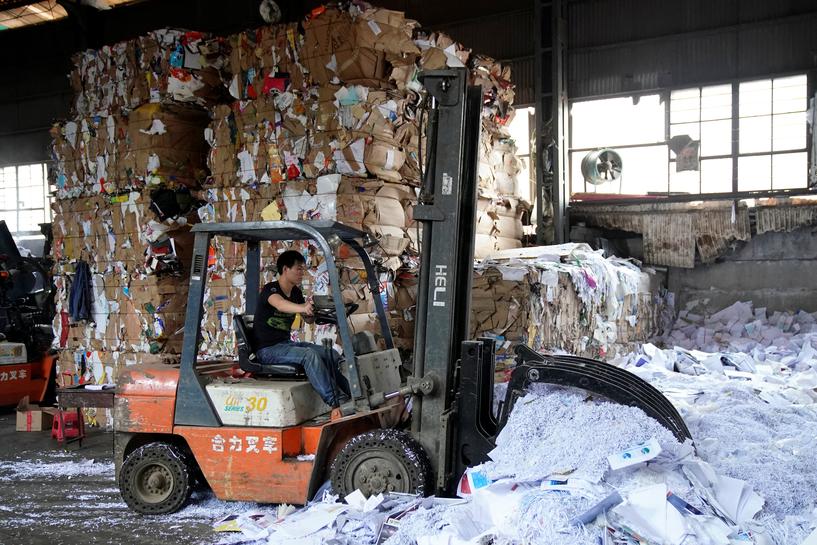 The annual Nov. 11 buying frenzy is a regular fillip for giant online retailers like Alibaba and JD.com, but the mountains of trash produced from just one day of conspicuous consumption have angered environmentalists.

China’s State Post Bureau (SPB) said postal and courier companies are having to deal with at least 331 million packages, up 31.5 percent from last year.

Greenpeace described the annual promotion as a “catastrophe for the environment” that not only creates waste, but leads to a surge in carbon emissions from manufacturing, packaging and shipping. In a report published last week, it estimated that total orders last year produced 52,400 tonnes of additional climate-warming carbon dioxide.

E-commerce firms have drawn up measures aimed at solving the problem, and aim to replace cardboard boxes with reusable plastic ones that courier companies can share. They have also experimented with biodegradable delivery bags and tape-free boxes, but Nie said the efforts were still not enough.

“China’s online retail giants have taken few real steps to reduce delivery packaging waste,” she said. “Ultimately, packaging that we throw out after one use is not a sustainable option.”

A spokesman for JD.com said it is “continually improving ways to better reduce waste and pollution” and, among other measures, aims to raise the proportion of biodegradable materials in its packaging materials to 80 percent by 2020.

Alibaba’s Cainiao logistics arm said in emailed comments that it had launched initiatives aimed at minimizing its environmental impact. “We are committed to work closely with different stakeholders to protect the environment and contribute to the sustainable development of the industry,” it said.

China’s packaging waste problems are not confined to Singles’ Day.

Overall deliveries continue to surge, with the number of packages expected to hit 50 billion next year, up from 30 billion in 2016, according to forecasts by the SPB.

But even that’s only a small part of China’s mounting waste problem, with large sections of the country’s soil and water contaminated by untreated industrial, rural and household trash.

With China’s major cities producing around 2 billion tonnes of solid waste a year, they are already surrounded by circles of landfill known in Beijing as the “seventh ring road”.

Despite massive production volumes that have left the country dependent on imported raw materials, overall recycling rates in industries like steel, glass or textiles remain way behind their international counterparts.

On top of that, China has only just started to impose restrictions on imported waste, which stood at 47 million tonnes in 2015.

Recycling of foreign and domestic trash was traditionally handled by migrant workers, known as “scavengers”, who ripped apart discarded goods in back-street workshops.

As well as ordinary couriers, China’s many food delivery services are under pressure to reduce waste. The Chongqing Green Volunteer League, a local environmental group, said earlier this year it was taking legal action against some operators for failing to handle the problem.

Activists claimed just one online delivery platform used enough chopsticks every day to destroy the equivalent of 6,700 trees. They said the firms fail to inform customers or give them opportunities to choose greener options.

Hu Zhengyang, a director at the China Packaging Association, told Reuters that his own industry body had appealed to delivery businesses to use fewer materials, but he said it ultimately “required more attention from government and ordinary people.”

The SPB issued new guidelines to deal with the problem last year, urging delivery companies to eliminate substandard packaging products by the end of 2020, and to establish a proper recycling system.

Delegates from central China’s Henan province, who raised the issue of packaging waste at this year’s parliament, said courier firms should be punished for violating rules, and incentives are needed to encourage the use of recyclable materials, which often cost more.

“This is not going to be welcomed by courier companies or consumers, and it needs state support in areas like policy, financing and taxation,” they said.

“If we really want to ‘green’ our buying habits, we need to consume less, re-use more and go back to repairing things that are broken,” she said.

Reporting by David Stanway and the Shanghai newsroom; Additional reporting by Cate Cadell in BEIJING; Editing by Ian Geoghegan