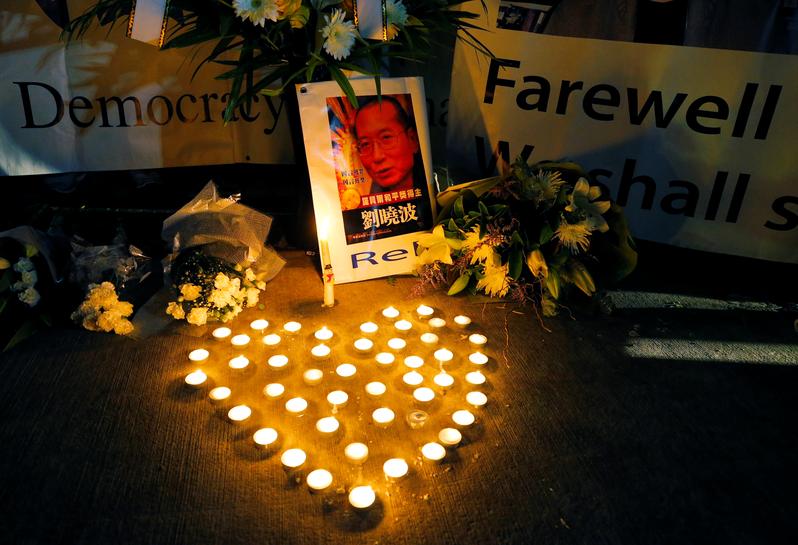 SHENYANG, China (Reuters) – Deceased Chinese Nobel Peace Prize-winning dissident Liu Xiaobo was cremated on Saturday and his wife is “free”, a government official said, as a state-run newspaper attacked him as a “despised” criminal out of step with Chinese society.

Liu, 61, died of multiple organ failure on Thursday in a hospital in the northeastern city of Shenyang, where he was being treated for late-stage liver cancer, having been given medical parole but not freed.

He had been jailed for 11 years in 2009 for “inciting subversion of state power” after helping to write a petition known as “Charter 08” calling for sweeping political reforms.

His wife, Liu Xia, has been under effective house arrest since her husband won the Nobel Peace Prize in 2010, but had been allowed to visit him in prison about once a month. She has never been formally charged with any crime.

His wife Liu Xia was present, and was given the ashes, Zhang told a news conference in Shenyang.

“According to my understanding, Liu Xia is currently free,” he said, adding that as a Chinese citizen, her rights would be protected under the law.

“But she just lost her spouse. She is extremely sad. In the period after dealing with the death of Liu Xiaobo, she won’t take anymore outside disturbances. This is the wish of the family members. It’s natural.”

Zhang did not say where Liu Xia currently was.

A government statement said Mozart’s Requiem was played during the funeral, a work of music Mozart left unfinished on his death bed.

Liu family lawyer Mo Shaoping told Reuters he did not know whether the cremation was in accordance with family wishes, however, as they had been unreachable.

“They are likely still to be under the watch and control of authorities,” Mo said. “They can’t be contacted.”

In funeral photographs handed out by the government, Liu Xia and other family members stand around the coffin containing Liu’s body, surrounded by white flowers that signify mourning in China.

Another picture shows what appears to be a box containing Liu’s ashes being presented to Liu Xia, as she clasps a black and white photograph of her husband.

During the past couple of weeks, Liu Xia had been at the hospital as her husband’s health deteriorated.

Rights groups and Western governments have mourned Liu Xiaobo’s death and urged authorities to grant freedom of movement to his wife and the rest of his family.

China has repeatedly attacked foreign governments for their concern about Liu and calls to allow Liu Xia to leave the country if she wishes, and foreign reporters in Shenyang have been closely monitored by plainclothes security.

Efforts are being made to secure permission from Chinese authorities for Liu Xia and her brother Liu Hui to leave, a Western diplomat said on Friday.

“This is why Chinese society opposes and despises him,” it said in an English-language editorial. “He was paranoid, naive and arrogant.”

The last Nobel Peace Prize winner to live out his dying days under state surveillance was Carl von Ossietzky, a pacifist who died in Berlin in Nazi Germany in 1938.