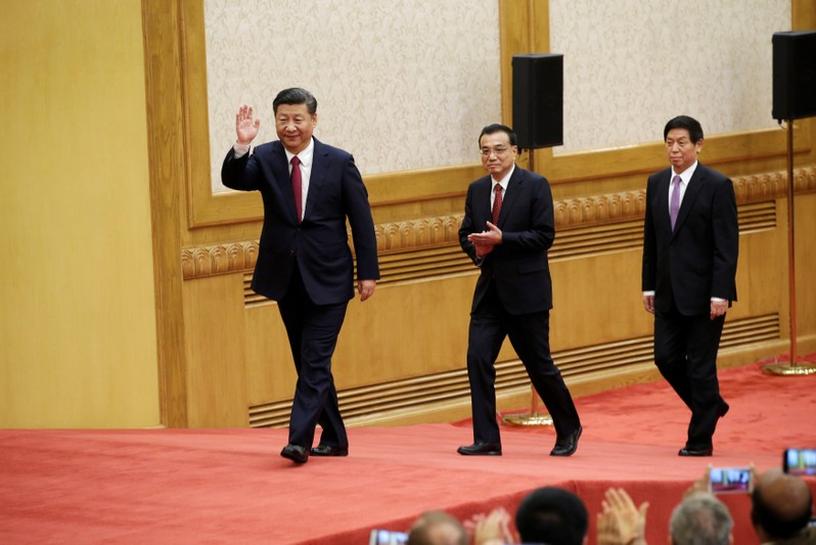 BEIJING (Reuters) – China’s Communist Party revealed its new leadership helmed by President Xi Jinping on Wednesday, breaking with recent precedent by failing to include a clear successor to the president among the seven-man line-up.

Apart from Xi, Premier Li Keqiang was the only one to retain his spot amid sweeping changes on the Politburo Standing Committee, the height of power in the world’s second-largest economy.

Li Zhanshu, Wang Yang, Wang Huning, Zhao Leji and Han Zheng were promoted, replacing five retiring members including anti-corruption chief Wang Qishan, a key Xi ally. All seven are in their 60s, and for the first time no Standing Committee member will have been born before the 1949 Communist revolution.

Guangdong party secretary Hu Chunhua and Chongqing party boss Chen Miner had been previously seen as prominent contenders to succeed Xi among the party’s so-called sixth generation of leaders but were not included in the Standing Committee. Instead, both were named to the wider 25-member Politburo, a rung below the Standing Committee.

Xi and Li were first promoted to the Standing Committee at the 17th Party Congress in 2007, in a clear signal that the pair would succeed Hu Jintao and Wen Jiabao and occupy the top two offices, as transpired five years later.

But Sun Zhengcai, another sixth-generation contender, was abruptly removed from his post as Chongqing party secretary in July, signaling the likelihood Xi would delay naming a successor and adding to speculation that Xi could seek to stay on in some capacity beyond the end of his second term in 2022.

Li Zhanshu, who is considered the closest to Xi among those newly promoted, will likely head China’s largely rubber stamp parliament, analysts and sources have said, having held a chief-of-staff style role as head of the party’s General Office.

The parliament position will be formally decided at the annual meeting of parliament in March.

Zhao Leji, the head of the party’s Organisation Department which oversees personnel decisions, replaces Wang Qishan as head of the Central Commission for Discipline Inspection after being named on the anti-graft body’s list of members on Tuesday.

A new Central Military Commission was also announced. Xu Qiliang stayed on as one of its two vice chairmen, while Zhang Youxia, who is close to Xi, was named its other vice chairman.

This is what happens if you eat too much fried chicken
NParks landscaper who tested positive for COVID-19 linked to Changi Airport cluster
Commentary: Questions arise over Indonesian military’s maintenance programmes after submarine sinking
‘No Right to Jury Trial,’ Hong Kong Prosecutors Tell Judicial Review
Doctors in Nepal warn of major crisis as COVID-19 cases surge