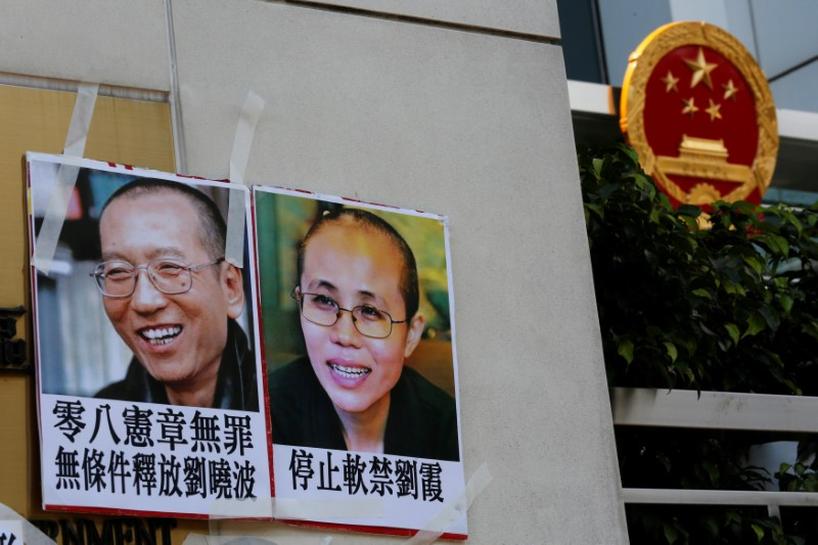 BEIJING Nobel Peace Prize-winning activist Liu Xiaobo’s liver cancer is beyond treatment by surgery, chemotherapy and radiotherapy, Liu’s wife said in a video, as worries deepen among supporters over his treatment by the Chinese authorities.

Liu is currently being treated in a hospital in north China’s Shenyang city for late-stage liver cancer, having been granted medical parole, his lawyer told Reuters on Monday.

A video of Liu’s wife Liu Xia, who has been under effective house arrest since her husband won the Nobel Peace Prize, crying and talking about her husband’s condition was shared online late on Monday.

A source close to the family confirmed the authenticity of the video and said Liu is being treated using targeted therapy.

“They (the authorities) say his cancer has already spread too far for other treatments, but because we cannot meet the doctors treating him, we have no way to tell if this is true,” he said.

Liu and his wife wanted to return to Beijing for treatment but the authorities rejected their request, the source said.

The prison bureau of Liaoning province said on Monday that Liu is being treated by eight “well-known tumor experts”, but western politicians and rights activists have voiced concern about the quality of treatment.

“Even with the news today that Dr Liu has been released from prison for medical treatment, serious questions remain,” U.S. Senator Marco Rubio, co-chair of the Congressional-Executive Commission on China, said in a statement on Monday.

China’s foreign ministry said on Monday it did not know about the circumstances of the case. China has in the past acknowledged problems of mistreatment in the criminal justice system and has repeatedly vowed to crack down to address them.

Wang Qiaoling, the activist wife of rights lawyers Li Heping, likened Liu’s case to that of her husband and the other dozens of lawyers who say they suffer illnesses due to mistreatment in Beijing’s most recent clampdown on dissent.

“Just as those captured in the 709 (crackdown) ‘met with high blood pressure’, we suspect Mr Liu Xiaobo ‘met with liver cancer’, and call for an independent third party medical organization to be involved,” she said on Twitter.

(Reporting by Christian Shepherd in Beijing and Venus Wu in Hong Kong; Editing by Michael Perry)