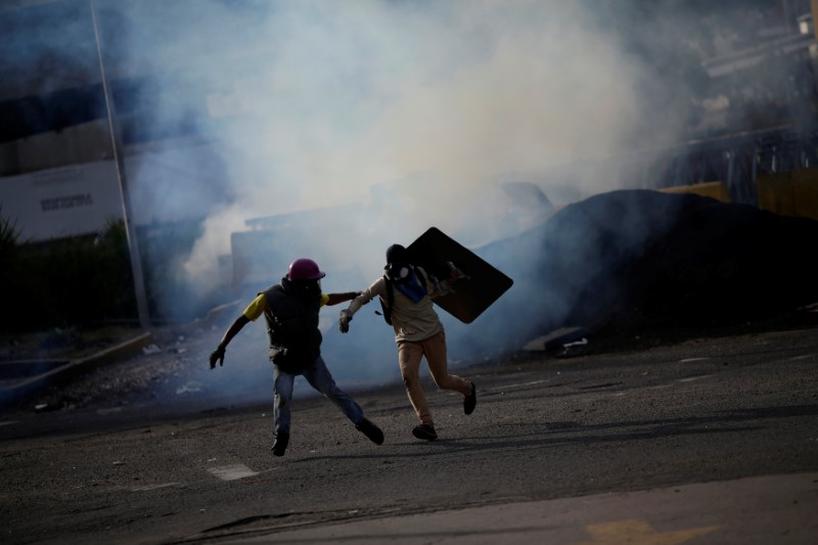 CARACAS/BARINAS, Venezuela (Reuters) – Clashes between Venezuelan security forces and demonstrators have killed five people during the latest opposition-led strike to protest against an election on Sunday critics say will mark the end of democracy in the OPEC nation.

Many streets remained barricaded and deserted on Thursday, as the nationwide work stoppage entered its second day.

Plenty of rural areas and working-class urban neighborhoods were bustling, however, and the strike appeared less massively supported than a one-day shutdown last week.

With Venezuela already brimming with shuttered stores and factories, amid a blistering four-year recession, the effectiveness of any strike can be hard to gauge. Many Venezuelans live hand-to-mouth and say they have to keep working.

Both of the latest stoppages were called to heap pressure on unpopular President Nicolas Maduro to scrap Sunday’s vote for a Constituent Assembly, which will have power to rewrite the constitution and shut down the existing opposition-led legislature.

At least 108 people have died in anti-government unrest convulsing the South American country since April, when the opposition launched protests demanding free and fair elections to end nearly two decades of socialist rule.

(For graphics on Venezuela’s economic crisis and anti-government protests see: tmsnrt.rs/2pPJdRb and tmsnrt.rs/2ujuylf)

In Barinas, home state of former Venezuelan leader Hugo Chavez, only about a third of businesses were closed according to a Reuters witness, as opposed to the opposition’s formal estimate of 92 percent participation nationally.

“I am opposed to the government and I agree we must do everything we can to get out of this mess, but I depend on my work. If I don’t work, my family does not eat,” said Ramon Alvarez, a 45-year-old barber at his shop in Barinas.

Adversaries say the ruling Socialist Party wants to consolidate dictatorship with Sunday’s vote. There has been widespread international condemnation of the ballot, and the United States on Wednesday announced sanctions against 13 current and former officials for corruption, undermining democracy, and participating in repression.

Government officials and candidates for the Constituent Assembly wrapped up campaigning on Thursday with a rally in Caracas with Maduro.

The leftist leader reiterated the assembly was the only way to bring peace to Venezuela, blasted threats of further sanctions from “emperor Donald Trump,” and hit back at accusations he is morphing into a tyrant.

“The usual suspects came out to say Maduro had become crazy,” he told cheering red-shirted supporters in Caracas. “Of course, I was crazy! Crazy with passion, crazy with a desire for peace.”

Amid rumors of 11th-hour attempts to foster negotiations, Maduro reiterated an invitation to dialogue with the opposition, although such talks have flopped in the past.

The state prosecutor’s office said a 49-year-old man was killed during a protest in Carabobo state and a 16-year old died in the middle class area of El Paraiso in Caracas on Thursday.

That added to the previously announced deaths of a 23-year-old man and a 30-year-old man killed in western Merida state and a 16-year-old boy killed in the poor Caracas neighborhood of Petare during clashes on Wednesday.

Over 190 people were arrested during the stoppage on Wednesday, said local rights group Penal Forum. Since April, authorities have rounded up nearly 4,800 people, of whom 1,325 remain behind bars, the group said.

Many Venezuelans are nervous about further violence over the weekend, and some have been stocking up on food and staying home. Interior Minister Nestor Reverol said the government was banning protests from Friday to Tuesday, although the prohibition is unlikely to be heeded.

Further isolating Venezuela, Colombian airline Avianca [AVT_p.CN] followed some other international carriers in suspending all flights to the country on Friday, citing “operational and security limitations.”

Voters on Sunday will choose 364 constitutional representatives distributed across municipalities and state capitals and another 181 “sectoral” candidates from demographic groups ranging from students to farmers and fisherman.

The opposition Democratic Unity coalition is boycotting the vote. They say the use of sectoral candidates, who had to collect signatures and file them to the government-leaning elections council, was a way to weed out anti-government aspirants.

Critics also note the lopsided representation of rural areas, where the Socialist Party has historically been strongest, at the expense of the opposition-leaning cities.

The country’s least-populated state of Amazonas will elect eight representatives to the assembly while the capital of Caracas will choose only seven, according a document about the vote posted on the National Electoral Council’s website.

State demographics agency INE data shows Amazonas having a population of 188,000 and the municipality of Caracas 2.1 million.

40 healthcare workers in Malaysia who had both doses of vaccine test positive for COVID-19
Commentary: It will be a waste if parents don’t keep flexible work arrangements
POFMA correction directions issued to Goh Meng Seng, Singapore Uncensored over COVID-19 vaccination falsehoods
‘Quick and convenient’ check-ins with new SafeEntry Gateways at malls, libraries and cinemas
India reports another record daily rise in COVID-19 infections