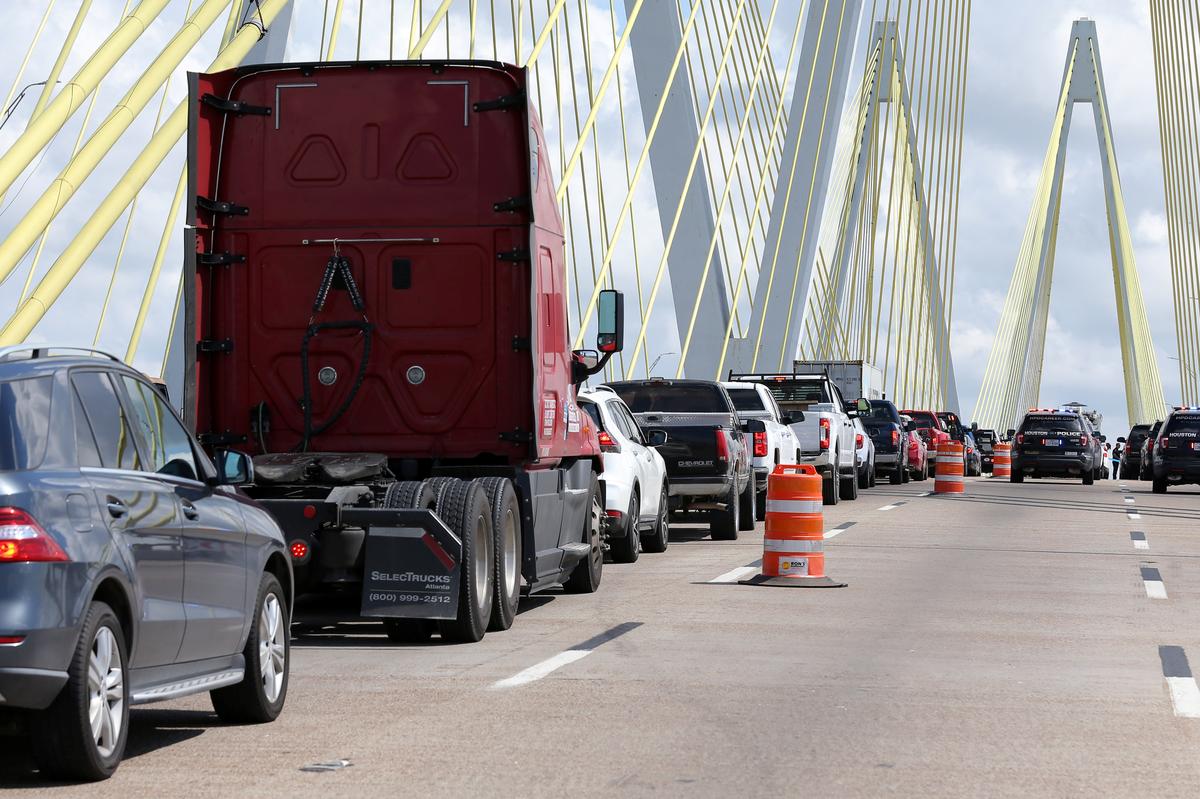 HOUSTON (Reuters) – Police have arrested the Greenpeace climate protesters who closed part of a key oil export waterway for 18 hours by tying themselves to a bridge and dangling over the water.

Traffic is pictured on the Fred Hartman Bridge where Greenpeace USA climbers formed a blockade, shutting down the Houston Ship Channel, the largest fossil fuel thoroughfare in the United States, ahead of the third Democratic primary debate in nearby Houston, near Baytown, Texas, U.S. September 12, 2019. REUTERS/Jonathan Bachman

The closure of one portion of the Houston Ship Channel, which stretches 53 miles (85 km) from its entrance in the Gulf of Mexico to the Port of Houston, blocked tanker ship traffic to and from five major oil refineries as well as chemical and oil-export terminals.

Twelve people were taken into police custody shortly after 5 p.m., Thursday, according to spokesmen for Greenpeace and the Harris County Sheriff’s office. The other 11 who were dangling by ropes and attached to one another were arrested late on Thursday and early Friday, police said.

Sheriff’s deputies rappelled down to the 11, cut the ropes tying them to one another and lowered each individually to police boats, spokesman Jason Spencer said.

The protesters timed the event to coincide with the nationally televised debate in Houston by 10 Democratic White House contenders, one member said.

Mike Herbert, 36, a protester reached by phone while he dangled about 100 feet from the bridge, said the group wanted to “force the hand of the political hopefuls to address the elephant in the room: climate change.”

The east Texas native who now lives in Maryland said members of the group were experienced climbers and had planned to continue the protest until Friday morning. They risked arrest because political leaders “aren’t taking climate change seriously,” he said.

Greenpeace spokesman Ryan Schleeter said that the protesters did not resist arrest and were prepared to face whatever charges were be leveled.

“We’ll know more about the charges in the morning,” Schleeter said. “Although they were prepared to stay for 24 hours, we feel that we have achieved our goal and sent a powerful message.”

He said that now is the time for lawmakers to take climate change seriously.

A sheriff’s representative was not available early Friday to comment on charges that the protesters face.

Briscoe Cain, a Texas state lawmaker whose district includes part of the ship channel, said the protesters would be the first to be charged under a recently enacted state law that makes disrupting critical infrastructure a crime.

Federal prosecutor Ryan Patrick earlier tweeted that his office and the Federal Bureau of Investigation were working with local police. His office did not respond to requests for comment.

Two vessel arrivals and seven departures were disrupted by the protests at mid-afternoon on Thursday, said Steven Nerheim, director of the Coast Guard Vessel Traffic Service for Houston-Galveston. The service normally sees 65 ships and 378 towing vessels per day.

The area affected by the closing is near Exxon Mobil Corp’s (XOM.N) 560,500-barrel-per-day refinery in Baytown, which is 26 miles (42 km) east of Houston.

Operations were normal at the plant on Thursday, said Exxon spokesman Jeremy Eikenberry. The refinery is the fourth-largest in the United States and Exxon’s largest in the country.

Shell and LyondellBasell said operations were not affected. Chevron declined to comment.

All of the refineries are able to ship motor fuels by pipeline, and most have enough crude on hand to operate for several days. J.J. Plunkett, port agent for the Houston Pilots Association, whose members guide ships in and out of the channel, said delays caused by the protest could be cleared within a day.

The channel was closed from Light 102A to Light 104, the Coast Guard said. Ship traffic to Texas City, Texas, where two refineries and several chemical plants are located, was not affected by the closure.