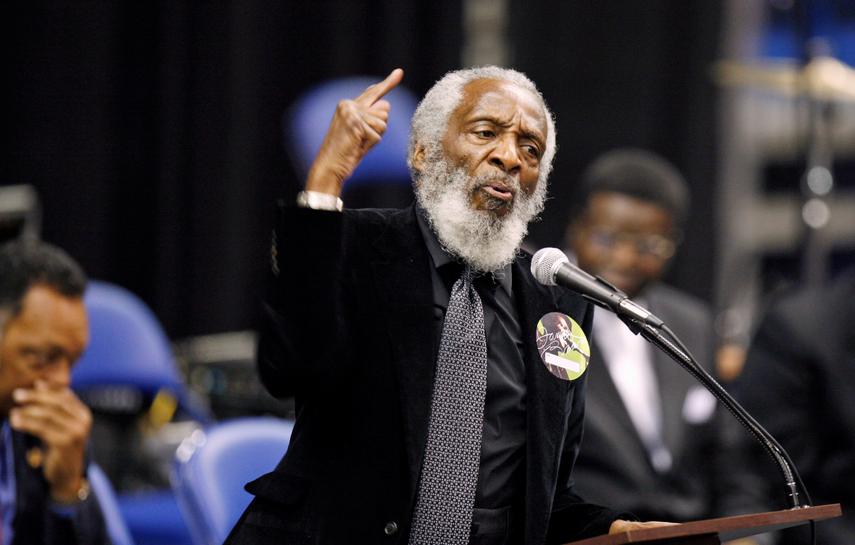 (Reuters) – Dick Gregory, a comedian who lambasted racism and played a prominent role in the 1960s civil rights movement after becoming one of the first black comics to perform for white audiences, died on Saturday at age 84, his son said.

“It is with enormous sadness that the Gregory family confirms that their father, comedic legend and civil rights activist Mr. Dick Gregory departed this earth tonight in Washington, D.C.,” his son, Christian, wrote on Instagram.

Gregory, who lived in Washington, checked into Sibley Memorial Hospital a week ago after falling ill, said his longtime publicist Steve Jaffe. He died at the facility of heart failure, Jaffe said.

Gregory’s success as a comedian in the early 1960s helped pave the way for other black comics, such as Richard Pryor, to gain greater fame by reaching a mainstream audience.

Born in St. Louis, Missouri, Gregory grew up in poverty. He was working for the U.S. Postal Service and performing in front of largely black audiences for low pay when Playboy founder Hugh Hefner saw Gregory’s act and hired the comedian to perform at his nightclub in 1961.

At the time, stand-up comedy was largely segregated.

“When I started, a black comic couldn’t work a white nightclub,” Gregory told the Florida Times-Union. “You could sing, you could dance, but you couldn’t stand flat-footed and talk – then the system would know how brilliant black folks was.”

Soon after his break at the Playboy Club, Gregory recorded a number of comedy albums and appeared on television talk shows, becoming one of the highest paid black entertainers in the early 1960s.

Gregory’s stand-up comedy tackled racism, often with quips that took his audience by surprise. “Segregation is not all bad,” he once joked. “Have you ever heard of a collision where the people in the back of the bus got hurt?”

If his comedy routine was at times disarming, his civil rights activism left no doubt where he stood.

Gregory was arrested several times for taking part in demonstrations in the 1960s, befriending the late Martin Luther King Jr as he used his fame to help push for desegregation.

The comedian also protested the Vietnam War, took part in hunger strikes and ran for U.S. president in 1968 as a write-in candidate for the obscure Peace and Freedom Party.

In the early 1970s, Gregory left stand-up comedy to spend more time on political activism and in the 1980s turned his focus to promoting healthy eating and became a diet food entrepreneur. He returned to stand-up in the 1990s.

This month, he was in the middle of a comedy tour when he fell ill, Jaffe said.

Gregory, in a 2011 interview with Reuters, played down the importance that an entertainer alone could have in bringing about social change.

“People like glamor. That’s what messes up America,” he said.