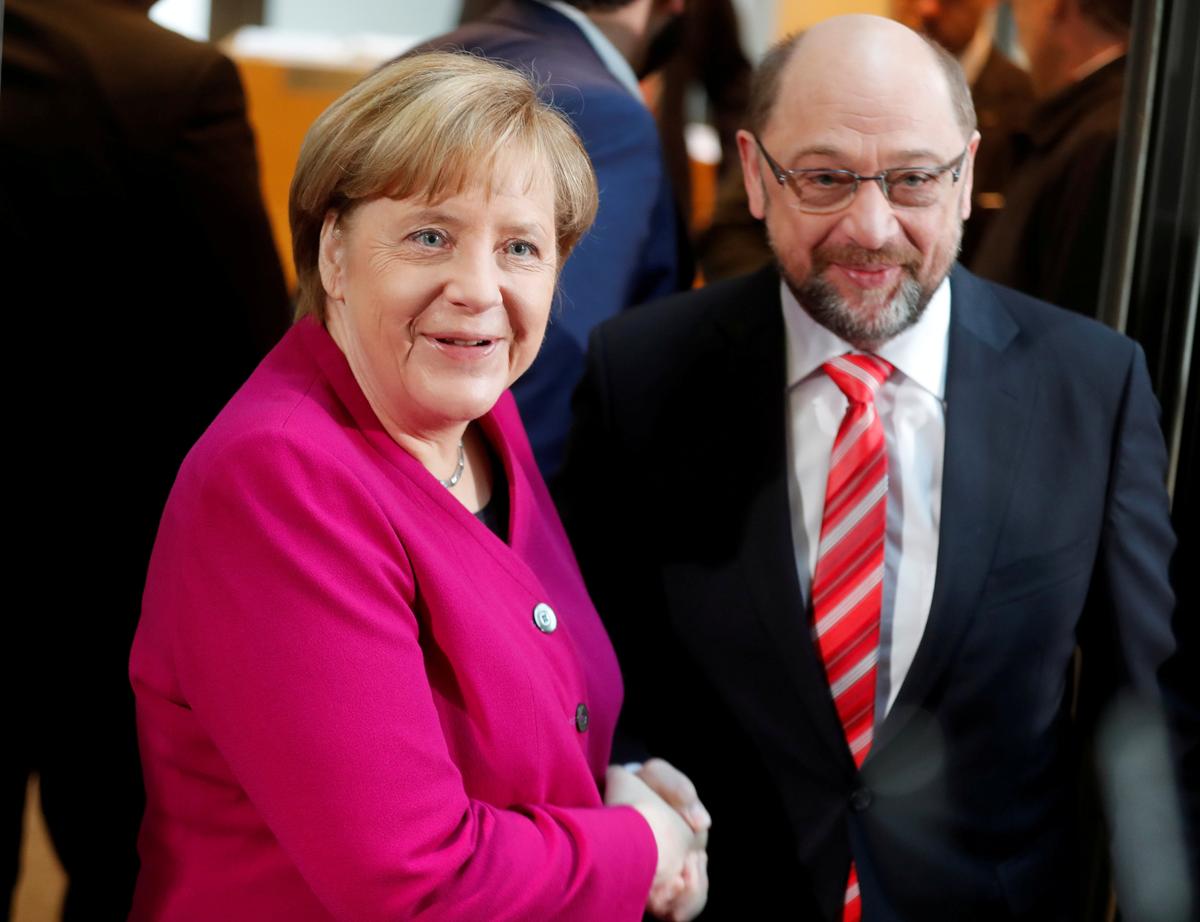 BERLIN (Reuters) – Chancellor Angela Merkel said on Sunday she was optimistic her conservatives and the Social Democrats (SPD) could cut a deal as they began five days of talks about reviving the ‘grand coalition’ that has governed Germany since 2013.

Persuading the center-left SPD to team up with her is Merkel’s best bet for forming a stable government and extending her 12 years in office, after she failed in November to form an alliance with two smaller parties.

Arriving at SPD headquarters for talks more than three months after a national election, Merkel said the parties had much work to get through but intended to tackle it quickly, adding: “I think it can succeed.”

The SPD, which had said it would go into opposition after its worst election showing since 1933, reconsidered when Germany’s president intervened.

But the center-left party, among whose membership opposition to a grand coalition re-run remains strong, has been playing hard-to-get.

A group called “NoGroKo”, meaning “no grand coalition”, has formed within its ranks to campaign against working with Merkel again, saying that would cost the SPD votes and make the far-right Alternative for Germany (AfD) the leading opposition party.

SPD leader Martin Schulz said that, while the outcome of the talks was unclear, his party would enter them constructively.

“We won’t draw any red lines – rather we want to push through as much red politics as possible,” Schulz said, referring to the party’s color.

He said five days should suffice to find out whether the parties had enough common ground to launch full-blown coalition talks. The SPD leadership is due to recommend on Friday whether or not to start those talks, and it will then be up to an SPD party congress on Jan. 21 to make a decision.

A coalition between Merkel’s CDU/CSU alliance – which lost ground to the AfD in September’s ballot – and the SPD has run Europe’s largest economy for eight of the last 12 years.

But it has tended to be viewed as a last resort by both politicians and voters as it leaves the opposition weak.

A poll for broadcaster ARD showed more than half of the electorate – 52 percent – are skeptical about reviving it, while 45 percent are in favor.

Not natural allies, the two camps are likely to clash on immigration, tax, healthcare and Europe – and expectations among other leading figures in the parties were mixed as the preliminary talks got under way.

Norbert Roemer, SPD head in the regional assembly of North Rhine-Westphalia, told RND newspaper group no lawmakers in his state caucus favored a grand coalition, with past experience meaning they no longer trusted Merkel. The SPD in the eastern state of Thuringia is also skeptical about such a tie-up.

Senior SPD member Thomas Oppermann told Welt am Sonntag newspaper that Merkel should step down during the current parliament and called for a chancellor’s tenure to be limited to eight or 10 years.

Volker Bouffier, a senior member of Merkel’s Christian Democrats (CDU), told Rheinische Post newspaper his party intended to form a grand coalition but that it could not come at any price, while Bavarian CSU leader Horst Seehofer said participants needed to come to an agreement.

The potential partners have agreed on a news blackout during the exploratory talks, which are due to finish on Thursday.

If the parties then progress to more detailed coalition talks, the consensus among politicians and observers is that those discussions would last until at least March.

But if the exploratory discussions fail, Germany could either face fresh elections or, for the first time in the post-war era, a minority government.