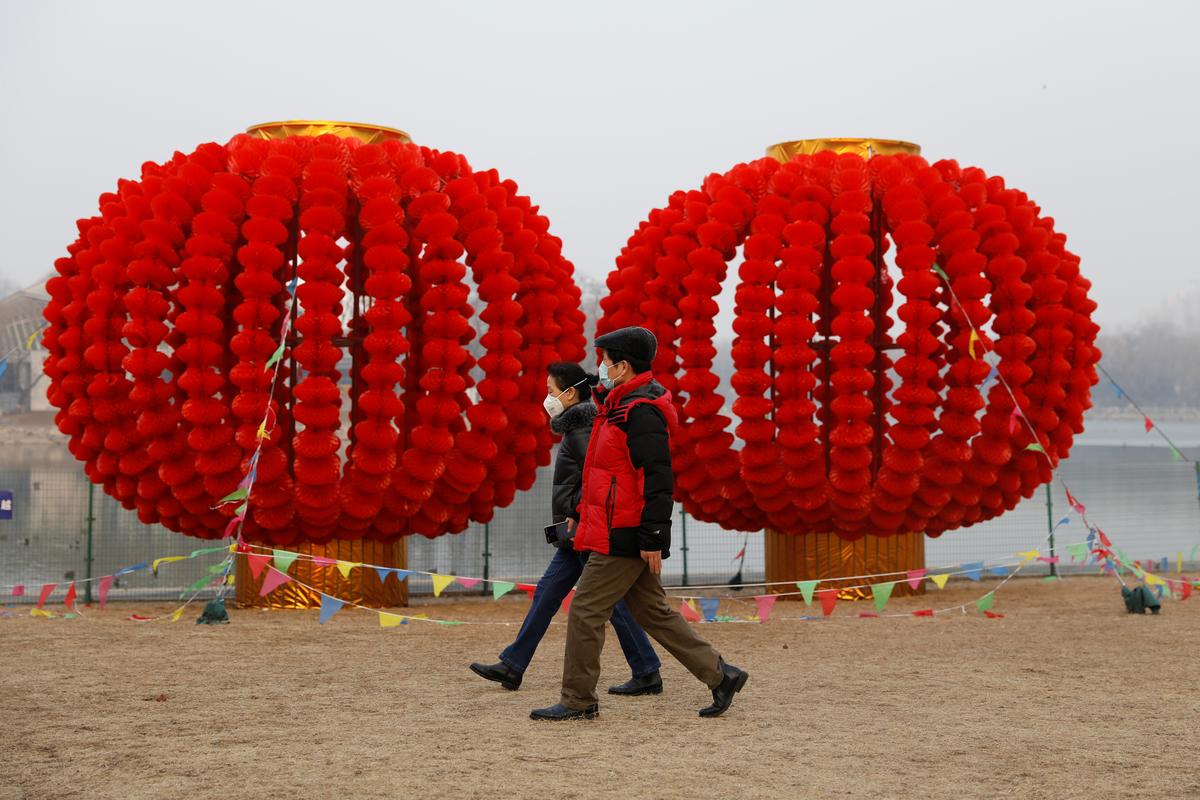 BEIJING (Reuters) – China on Wednesday reported its lowest number of new coronavirus cases since late January, lending weight to a prediction from its senior medical adviser that the outbreak could be over by April.

People wearing face masks walk at Longtan Park, as the country is hit by an outbreak of the new coronavirus, in Beijing, China February 11, 2020. REUTERS/Carlos Garcia Rawlins

Global markets took heart from the outlook but other international experts remain alarmed by the spread of the flu-like virus, which has killed more than 1,100 people, all but two in mainland China, and said optimism could be premature.

China’s foremost medical adviser on the outbreak, Zhong Nanshan, said the numbers of new cases were falling in some provinces, and forecast the epidemic would peak this month.

“I hope this outbreak or this event may be over in something like April,” Zhong, an epidemiologist whose previous forecast of an earlier peak turned out to be premature, told Reuters on Tuesday.

Total cases of the new coronavirus in China have hit 44,653, according to health officials, including 2,015 new confirmed cases on Tuesday. That was the lowest daily rise in new cases since Jan. 30.

China last week amended its guidelines on prevention and control of the coronavirus, saying that only when asymptomatic cases show clinical signs should they be recorded as a confirmed case. However, it is not clear if the government data previously included asymptomatic cases.

While Chinese officials said the situation was under control, the World Health Organization (WHO) warned the epidemic posed a global threat potentially worse than terrorism.

The world must “wake up and consider this enemy virus as public enemy number one”, WHO chief Tedros Adhanom Ghebreyesus said on Tuesday, adding the first vaccine was 18 months away.

“We’ve just got to watch the data very closely over the coming weeks before we make any predictions,” he told the Australian Broadcasting Corp, while praising China’s “Herculean efforts” to contain the virus.

Hundreds of cases have been reported in dozens of countries and territories around the world, including one fatality in Hong Kong and another in the Philippines.

The biggest cluster of cases outside China is aboard the Diamond Princess cruise ship quarantined off the Japanese port of Yokohama with about 3,700 people on board. Japanese officials on Wednesday said another 39 people had tested positive for the virus, bringing the total to 175.

One of the new cases was a quarantine officer who had followed rules that required the wearing of a mask and gloves but not a full protective suit, according to the Nikkei business daily, quoting the health ministry.

Thailand said it was barring passengers from another cruise ship, MS Westerdam, from disembarking, the latest country to turn it away amid fears of the coronavirus despite no confirmed infections on board.

‘BATTLE THAT MUST BE WON’

Echoing the comparison with the fight against terrorism, China’s state news agency Xinhua said late on Tuesday the epidemic was a “battle that has no gunpowder smoke but must be won”.

The epidemic was a “big test of China’s governance system and capabilities” and said some officials were still “dropping the ball” in places where it was most severe.

The government of Hubei, the province at the outbreak’s epicenter, dismissed the provincial health commission’s Communist Party boss, state media said on Tuesday, amid mounting public anger over the crisis.

China’s censors had allowed criticism of local officials but have begun cracking down on reporting of the outbreak, issuing reprimands to tech firms that gave free rein to online speech, Chinese journalists said.

The pathogen has been named COVID-19 – CO for corona, VI for virus, D for disease and 19 for the year it emerged. It is suspected to have come from a market that illegally traded wildlife in Hubei’s capital Wuhan in December.

The city of 11 million people remains under virtual lockdown. It and other Chinese cities resemble ghost towns due to travel restrictions that have paralyzed the world’s second-biggest economy.

World stocks, which had seen rounds of sell-offs over the virus, surged to record highs on hope for a peak in cases. The Dow industrials, S&P 500 and Nasdaq all hit new highs, and Asian shares nudged higher on Wednesday.

Even if the epidemic ends soon, it has already taken a toll on China’s economy, with companies laying off workers and other firms needing loans running into billions of dollars to stay afloat. Supply chains for car manufacturers to smartphone makers have broken down.

Wu Chaoming, chief economist at Fortune Securities, wrote in a report that the impact on China’s labor market would be far greater than that of a 2002-2003 outbreak of another coronavirus that caused Severe Acute Respiratory Syndrome.

About 24% of the labor force, or 186 million people, “could face some risks in salary reduction or even being laid off”, he said.

ANZ bank said China’s first-quarter growth would likely slow to 3.2-4.0% compared with an earlier projection of 5.0%.

China’s aviation regulator urged countries to lift virus-related travel restrictions as soon as possible, but airlines showed no sign of easing their curbs on flights.