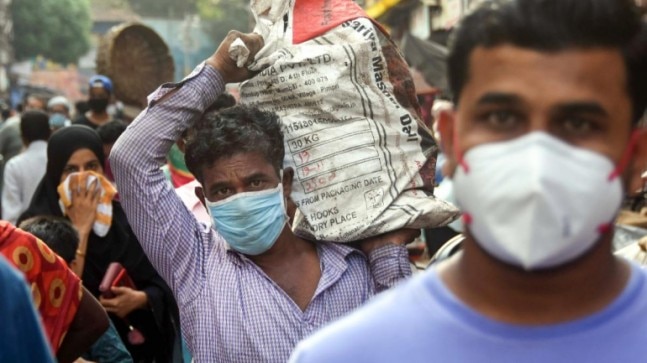 India continued to battle the deadly coronavirus pandemic on Saturday as the country recorded the highest number of Covid-19 cases in a day, taking the tally to 987. The toll climbed to 22 on Saturday with Telangana and Kerala reporting first deaths due to the virus in their states.

A 74-year old man became Telangana’s first coronavirus fatality as samples of him taken after his death two days ago tested positive for the infection as the total number of Covid-19 cases mounted to 67, state Health Minister E Rajender said.

As per officials in Kerala, which has the second-highest number of cases after Maharashtra, the state reported its first Covid-19 death on Saturday after a 69-year-old man being treated for the virus died at Ernakulam Medical College Hospital, but it was not included in the central data. Kerala has reported 187 positive cases.

The man was admitted to the isolation ward on March 22 after his return from Dubai, the government hospital said in a statement.

Maharashtra has reported 210 cases including 25 who were cured and 5 deaths. 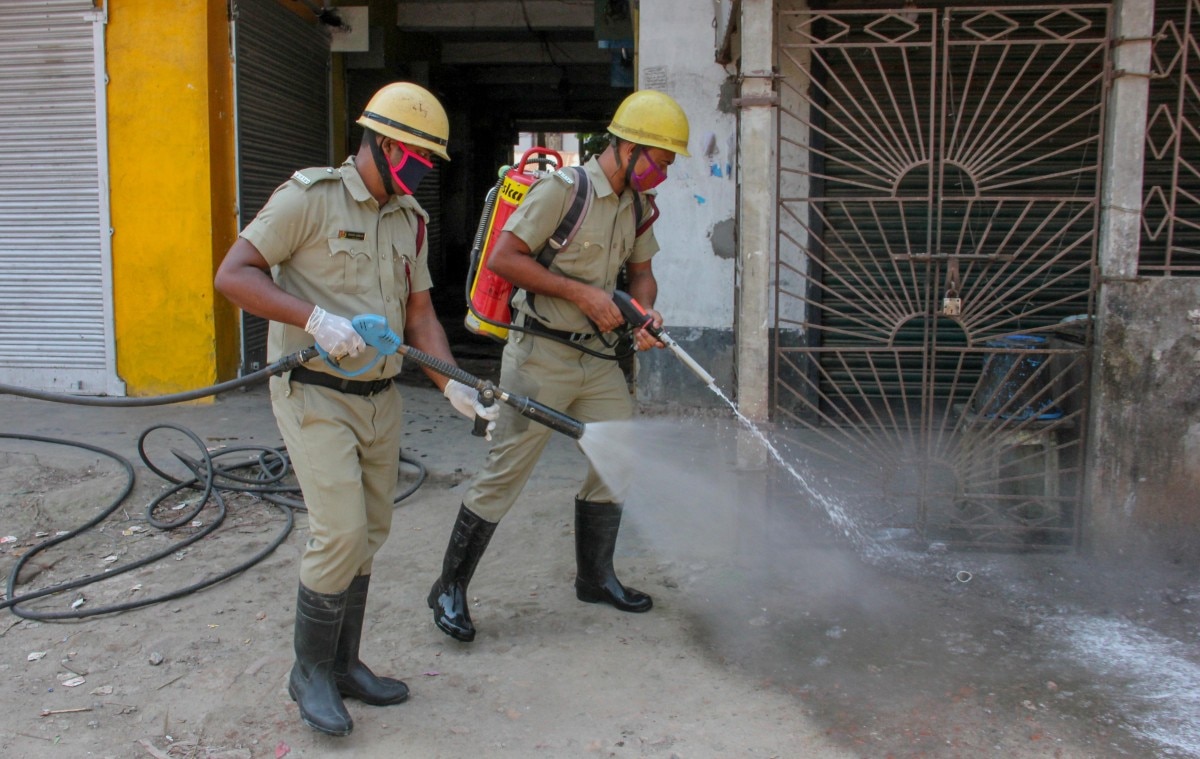 The total number of coronavirus cases in the national capital climbed to 49, while a Yemini national has become the second person to die of the Covid-19 infection in Delhi, authorities said.

The foreign national, aged 60, died on Thursday at a private hospital in New Delhi, a senior official said, adding the laboratory report was received late Friday night. Earlier, a 68-year-old woman in Delhi had died due to the virus.

Meanwhile, 13 people tested positive for coronavirus in Jammu and Kashmir on Saturday, taking the total number of cases to 33. Of these, 24 cases have been reported from Valley while nine are from Jammu region.

Prime Minister Narendra Modi announced a special contributory fund, amid looming fears of the country entering the third stage of community transmission. The Prime Minister’s Citizen Assistance and Relief in Emergency Situations Fund will go a long way in creating a healthier India, he said on Twitter.

“It is my appeal to my fellow Indians, kindly contribute to the PM-CARES Fund. This Fund will also cater to similar distressing situations if they occur in the times ahead,” PM Modi said.

A statement posted on his official website said while the prime minister is the chairman of the new public charitable trust, its members include Defence Minister Rajnath Singh, Home Minister Amit Shah and Finance Minister Nirmala Sitaraman.

Lok Sabha Speaker Om Birla requested MPs to allocate Rs 1 crore from their MPLADs fund to local authorities to tackle the coronavirus pandemic. He also appealed to all Lok Sabha members to donate at least one month’s salary to the PM-CARES Fund. Several Union Ministers including Nitin Gadkari and Pralhad Joshi also pledged to contribute to the fund.

This is that time when all that matters is the lives of our people. And we need to do anything and everything it takes. I pledge to contribute Rs 25 crores from my savings to @narendramodi ji’s PM-CARES Fund. Let’s save lives, Jaan hai toh jahaan hai. https://t.co/dKbxiLXFLS

India’s richest sports body BCCI pledged a donation of Rs 51 crore to the Prime Minister’s Relief Fund. The cricket community along with other sportspersons have come up with their donations. Among cricketers, Suresh Raina’s 52 lakh is the biggest individual contribution so far. Sachin Tendulkar announced a contribution of Rs 50 lakh.

Meanwhile, the government shored up efforts to boost health infrastructure, including procurement of ventilators. The Centre asked the state governments and Union Territory administrations to utilise Rs 29,000 crore State Disaster Response Fund (SDRF) for providing food and shelter to migrant workers hit by the 21-day lockdown. 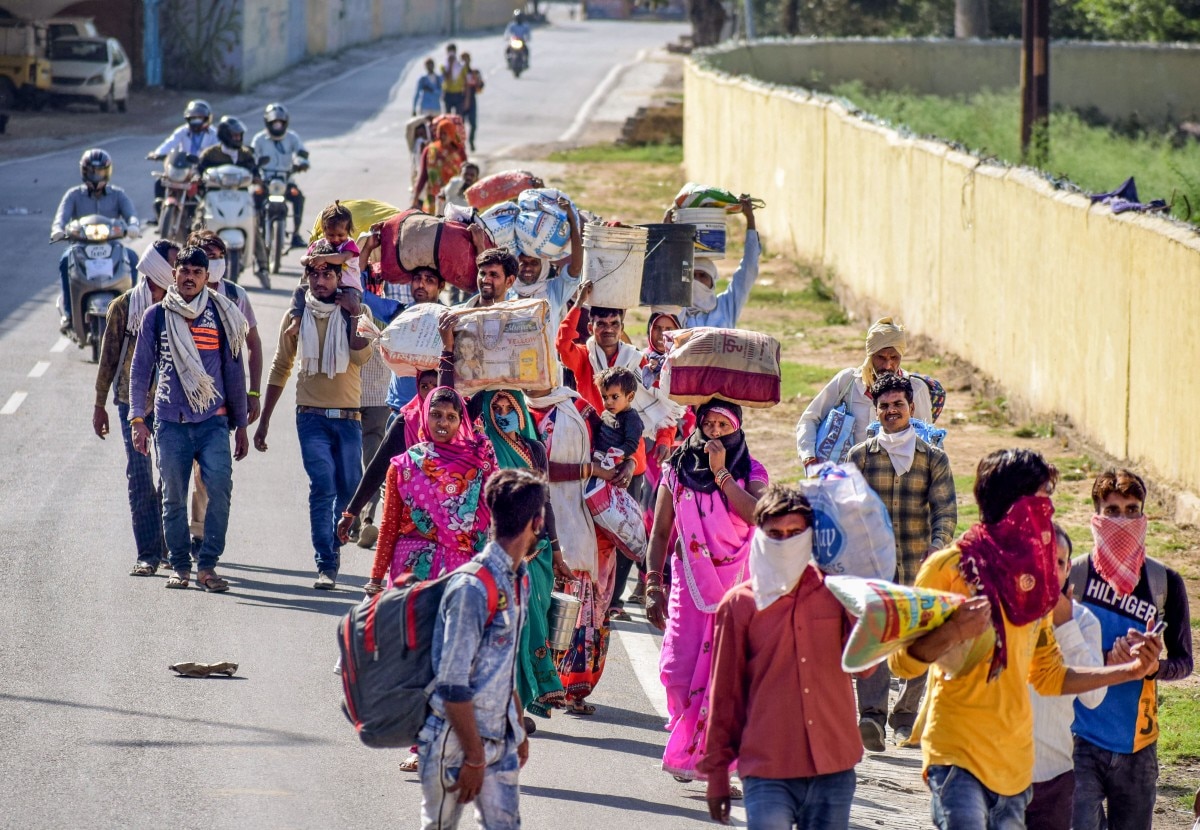 A group of workers walking towards their native place. (Photo: PTI)

Resources were also being mobilised from private medical establishments, and armed forces while the railways has manufactured a prototype of an isolation ward for treating coronavirus patients by converting non-air-conditioned train coaches.

The armed forces are keeping ready 28 service hospitals to provide treatment to Covid-19 patients apart from five hospitals which are carrying laboratory tests for the infection.

‘INDIA NOT IN COMMUNITY TRANSMISSION STAGE’

Despite India being under a 21-day lockdown from Tuesday midnight as part of efforts to check the spread of coronavirus, the exodus of a large number of migrant labourers to their native places in huge groups has compounded fears of the spread of the virus.

Delhi: Migrant workers in very large numbers at Delhi’s Anand Vihar bus terminal, to board buses to their respective home towns and villages. They have walked to the bus terminal on foot from different parts of the city. pic.twitter.com/IeToP3hX7H

“Till the time we see a significant number of cases to indicate community transmission, let us not over-interpret things,” said Raman R Gangakhedkar, head of the Epidemiology and Communicable Diseases at ICMR.

The latest episode of Mann ki Baat on Sunday will focus on the coronavirus pandemic, Prime Minister Narendra Modi has said.

“Tune in tomorrow at 11 (AM). Tomorrow’s episode will be focused on the situation prevailing due to COVID-19,” Modi tweeted.

Tomorrow’s episode will be focused on the situation prevailing due to COVID-19. #MannKiBaat pic.twitter.com/wWybvdLW8k

HOW WELL IS INDIA PREPARED FOR THE PANDEMIC?

At a press briefing on the current Covid-19 situation in India, Joint Secretary in the Ministry of Health, Lav Agarwal said the government is working with states on health infrastructure preparedness and the focus is having dedicated Covid -19 hospitals and blocks in every states and arrangement are being made to ramp up isolation and ICU beds and other required logistics.

17 states have so far started work on this, he said, adding doctors and nurses are being provided online training from AIIMS, New Delhi on the management of Covid-19 patients.

A 24×7 national teleconsultation Centre at AIIMS has also been launched through which doctors in other hospitals and medical colleges will be provided clinical guidance.

“We have been pre-emptive and graded in our approach and had anticipated the situation much before and went for a lockdown when were getting limited cases of local transmission while other countries took steps much later,” he said.

Officials said 111 government laboratories are currently functional across the country and with the private sector being roped in, it has been increased.

“As of now we are utilising only 30 per cent of our capacity. More than 5 lakh probes that were imported from USA has arrived, which means we cam test an additional 5 lakh people. More so, labs still have reagents to test more than one lakh patients,” Gangakhedkar said.

The health ministry has already asked hospitals and medical education institutions to procure sufficient number of ventilators and high-flow oxygen masks to be prepared for any possible influx of patients. It has also asked hospitals to postpone all non-essential surgeries.

States were also ramping up facilities and ordering more equipment especially ventilators. Government, government-aided and private medical colleges have been asked to reserve beds in all districts.

Adequate stocks of masks and personal protective equipment were being maintained, officials said.

Civil Aviation Minister Hardeep Singh Puri said aircraft are crisscrossing the Indian airspace to ensure that the Covid-19 testing kits of the ICMR reach their destinations on time. The Indian Navy too deployed its aircraft to help the Goa government transport 60 samples to the Pune-based National Institute of Virology (NIV) for testing, an official said on Saturday.

Private hospitals like Apollo and Max were forming teams and dedicated wards to deal with any possible surge in cases.

Europe pins hopes on smarter coronavirus contact tracing apps
Fake Aadhaar, official car: How 2 Pakistani spies were caught red-handed after weeks of watch
Interview: ‘This Will be a Century-Long Trauma for The Chinese People’
Brazil, Mexico currencies both rebound but real has more legs than peso
Kerala pregnant elephant drowned herself to death after explosion in mouth, 3 suspects in custody | Key points