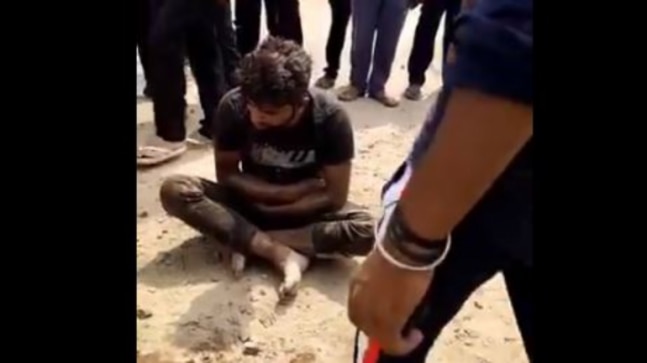 An unarmed man was beaten up by a mob in Badshahpur village of Gurgaon in Haryana on suspicion that he was transporting beef in his truck while police and dozens of people watched over the entire barbarity.

The incident happened on Friday morning at around 9 am when a group of cow vigilantes managed to stop the pick-up truck in Badshahpur after chasing it for about 8 km.

The driver, identified as Lukman, was pulled out of the pick-up truck and beaten up by the mob on the suspicion that he was transporting beef. Even the presence of the police, which did little to stop the mob, did not deter the crowd from beating the helpless man to a pulp.

Several videos of the incident in Gurgaon has gone viral on social media.

The video shows a helpless Lukman, with his head bleeding, pleading the mob to let him go as the crowd continues to thrash him. In the video, the accused, all unmasked, are seen kicking, dragging, and assaulting the 25-year-old.

At one point, a man is seen rushing towards Lukman with a hammer and bashing him with it as Lukman pleaded him to stop. One more viral video shows Lukman sitting in the middle of a crowd when a man kicks him on his face ruthlessly.

This is when the Gurgaon police tried to intervene and stop the mob. However, the fearless mob took on even the cops and damaged the police vehicle. Lukman was later taken to a local hospital where he is undergoing treatment.

While the meat Lukman was transporting in his truck to the meat market close to the masjid, has been sent to a lab for testing, no accused in the case has so far been arrested.

The head of the meat market, Tahir, has told India Today TV that the meat was buffalo. He said he has been in this business for about 50 years.

Meanwhile, an investigation has been launched in the case.