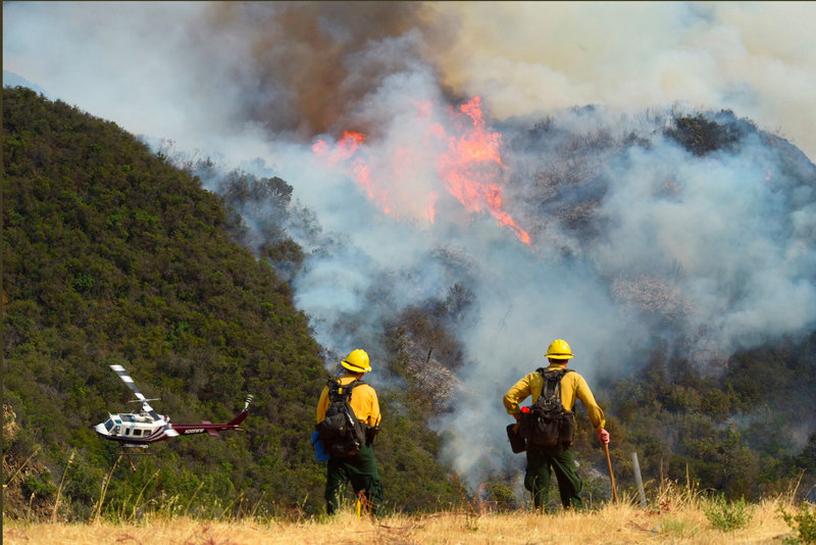 LOS ANGELES (Reuters) – Crews battled dozens of wildfires raging across California on Wednesday, gaining ground on several of the more destructive blazes as forecasters warned that hot, dry, tinderbox conditions would persist across the U.S. West.

In Northern California, by late Wednesday afternoon firefighters had cut containment lines around more than half of the so-called Wall Fire, which has damaged or destroyed more than 100 structures, 44 of them homes, since it broke out last week.

Evacuation orders in the path of the Wall fire were reduced to warnings on Wednesday but according to the California Department of Forestry and Fire Protection more than 600 homes remained threatened.

The blaze has displaced 4,000 people and charred some 5,800 acres of tall grass and chaparral in Butte County, north of Sacramento.

In Southern California, meanwhile crews had managed to contain 65 percent of the Alamo Fire, which has blackened nearly 29,000 acres northeast of Santa Maria in San Luis Obispo County.

Some 200 people remained under evacuation orders because of the blaze, which has destroyed two structures

The Whittier Fire in Santa Barbara County forced the evacuation of thousands of campers near Lake Cachuma, including some who left behind their trailers in the rush.

Dozens of residents were also evacuated when the fire broke out on Saturday, officials said.

By Wednesday, firefighters had contained 48 percent of the blaze, up from 25 percent a day earlier. The fire has burned nearly 12,000 acres.

As of Wednesday evening 47 large fires were burning out of control across the U.S. West, according to the National Interagency Coordination Center.

So far this year, more than twice as much land mass in California has been charred by flames compared to the same time last year, said Heather Williams, a Forestry and Fire Protection spokeswoman.

Temperatures in the region will top 100 degrees Fahrenheit (38 degrees Celsius) this week, with only scattered showers to possibly quell some flames, said meteorologist Brian Hurley of the National Weather Service.

At a local assistance center, resident Carolyn Opalenik said her house had been destroyed.

“It’s all gone. We have pictures, and it’s all gone,” she told the Chico Enterprise-Record newspaper.

Reporting by Brendan O’Brien in Milwaukee and Dan Whitcomb in Los Angeles; Editing by Raissa Kasolowsky and Tom Brown