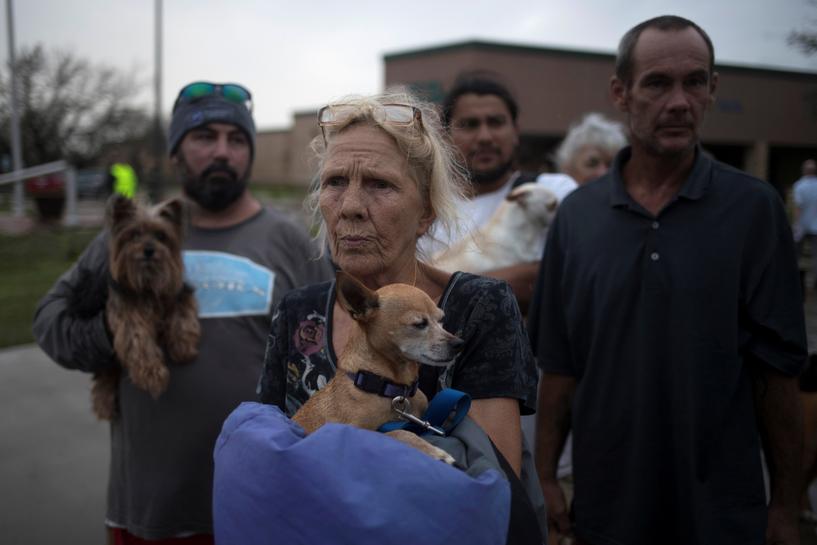 Harvey came ashore late Friday as the most powerful hurricane to hit Texas in more than 50 years and has killed at least two people. The death toll is expected to rise as the storm lashes the U.S. state for days, triggering more floods, tidal surges and tornadoes.

Harvey is forecast to arc slowly toward Houston through Wednesday. The center of the storm is still 125 miles (201.17 km) southwest of the fourth most populous city in the United States.

Emergency services told people to climb onto the roofs of their houses rather than into their attics to escape rapidly rising waters. Authorities warned the city’s more than two million residents not to leave flooded homes because many of the city’s roads were underwater.

The Twitter account of the sheriff of Harris County, which includes most of Houston, was inundated with rescue requests. Sheriff Ed Gonzalez said his deputies responded to unconfirmed reports of a deceased woman and child inside a submerged vehicle on a highway near Houston.

Another resident described seeing a woman’s body floating in the streets during a flash flood in west Houston. The flood was several feet high, the resident told local TV station abc13.

Gonzalez’ stretched rescue teams were struggling to deal with requests for help.

“All agencies care but everyone simply operating at maximum capacity,” he tweeted at one point.

Houston’s William P. Hobby Airport canceled all inbound and outbound flights early on Sunday due to standing water on the runway. The airport said its arrivals area was flooded, and the National Weather Service issued a flash flood alert for the surrounding area.

“The flooding in Houston is dramatic,” Texas Governor Greg Abbott said in an interview on Fox News on Sunday.

“We are working to save lives and to keep as many people safe as possible.”

Authorities have urged residents to stay off the streets of cities across southeast Texas as rain fell at up to 5 inches (12.7 cm) per hour.

“There are a number of stranded people on our streets, calling 911, exhausting needed resources. You can help by staying off the streets,” Houston Mayor Sylvester Turner said on Twitter.

On Friday night, a man died in a house fire in the town of Rockport, 30 miles (48 km) north of the city of Corpus Christi. Another dozen people in the area suffered injuries including broken bones, another official said.

Energy production in the heart of the country’s oil and gas industry was disrupted as several refineries and offshore platforms closed down, triggering a rise in gasoline prices.

Exxon Mobil said Sunday it was shutting down the second largest refinery in the United States at Baytown in Texas.

More than 45 percent of the country’s refining capacity is along the U.S. Gulf Coast, and nearly a fifth of the nation’s crude oil is produced offshore in the Gulf of Mexico.

Abbott said Sunday he expected disruption to the energy industry to last one or two weeks.

Julie holds her dog Pee-wee as they stand in line to be evacuated to Austin after losing their home to Hurricane Harvey in Rockport, Texas.Adrees Latif

Harvey slammed into Texas as a Category 4 hurricane with winds of 130 miles per hour (210 km per hour), making it the strongest storm to hit the state since 1961.

The storm ripped off roofs, destroyed buildings, flooded coastal towns and had cut off power to nearly 230,000 people in Texas as of Saturday night.

Harvey was downgraded to a tropical storm on Saturday because its winds have slowed. But authorities issued stark warnings on the threat posed by days of torrential rain.

Abbott said 1,800 members of the military would help with the statewide cleanup. Another 1,000 people were conduct search-and-rescue operations.

The coastal town of Rockport took a direct hit from the storm, leaving streets flooded and strewn with power lines and debris on Saturday.

A dozen recreational vehicles were flipped over on a sales lot, one blown into the middle of the street. A convoy of military vehicles arrived in the Rockport area on Saturday to help in the recovery efforts, and town officials announced an overnight curfew for residents.

Before the storm hit, Rockport’s mayor told anyone staying behind to write their names on their arms for identification in case of death or injury.

The Texas Department of Criminal Justice said it was forced to evacuate about 4,500 inmates from three state prisons near the Brazos River because of rising water.

The U.S. Coast Guard said it had rescued 20 people from distressed vessels on Saturday, and was monitoring two Carnival Corp cruise ships carrying thousands of people stranded in the U.S. Gulf of Mexico.

U.S. President Donald Trump, facing the first big natural disaster of his term, said on Sunday he would visit the area as soon as he could do so without causing more disruption.

He said the all-out effort to deal with the disaster was going well. Trump signed a disaster proclamation on Friday, triggering federal relief efforts.

Recovery would likely take years, the administrator of the Federal Emergency Management Agency (FEMA) Brock Long said in an interview with CNN on Sunday. FEMA coordinates the response to major disasters.

“This is going to be a landmark event,” he said.