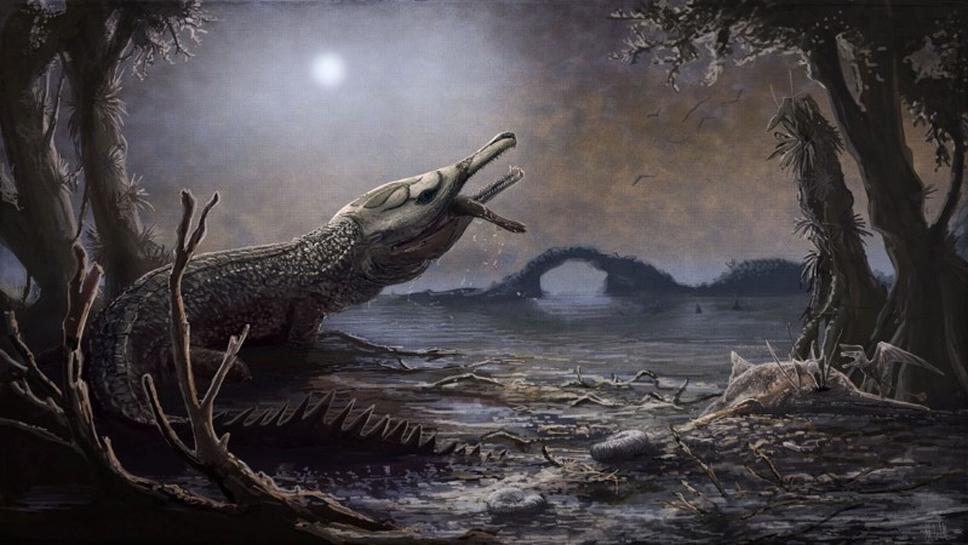 WASHINGTON (Reuters) – A ferocious sea-going crocodile that menaced coastal waters about 164 million years ago during the Jurassic Period has been given a name honoring the similarly ferocious heavy-metal rocker Lemmy, the late front man for the British band Motörhead.

Scientists said on Wednesday they have named the 19-foot-long (5.8 meters) reptile Lemmysuchus, meaning “Lemmy’s crocodile.” Its fossils were unearthed near the eastern English city of Peterborough in 1909 and were recently re-examined and determined to be a distinct genus in need of a name.

Its enlongated, narrow snout resembled those of modern fish-eating crocs from India called gharials. It boasted large, blunt teeth perfect for crushing turtle shells or other hard-bodied prey like hard-scaled fish, said University of Edinburgh paleontologist Michela Johnson, lead author of the study published in the Zoological Journal of the Linnean Society.

“It’s big, ugly and quite scary. We think that Lemmy would have liked it. For me, this is a career high, and I can now die happy,” added another of the researchers, Lorna Steel, who came up with the name.

Known for hard living and hard rocking, gravelly voiced Ian “Lemmy” Kilmister, died of cancer at age 70 in 2015 in Los Angeles. He formed his influential band Motörhead in 1975.

“I wanted to name something after Lemmy after he died,” said Steel, senior curator for fossils from the croc family, birds and flying reptiles at the Natural History Museum in London.

“At that time, late December 2015, I was working with colleagues from Edinburgh University on this particular fossil specimen. I kept the thought to myself for a while but then floated the idea past the others. They all thought it was great and it really is the most appropriate fossil to bear Lemmy’s name.”

Lemmysuchus was a member of a group called teleosaurs, sea-going crocodiles that thrived for tens of millions of years during the age of dinosaurs. The seas at the time were also populated by a number of types of marine reptiles including long-necked plesiosaurs and dolphin-like ichthyosaurs.

Johnson studied the fossil specimen held at the Natural History Museum and determined that it had been incorrectly classified as another teleosaur called Steneosaurus.