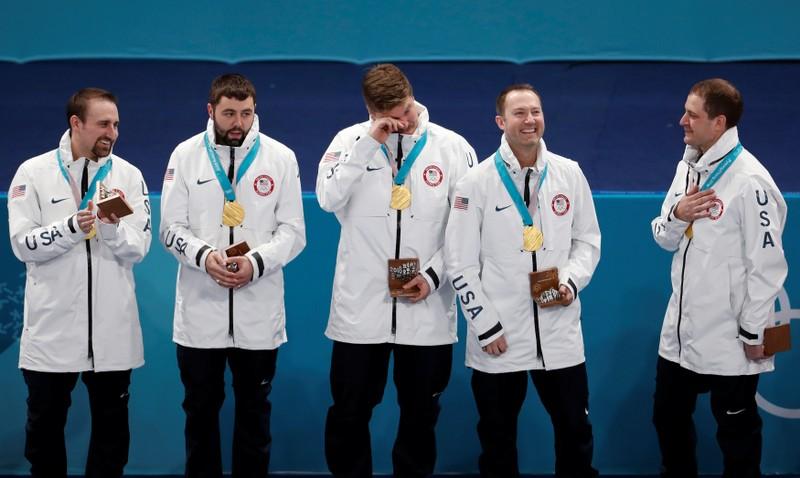 With the score deadlocked at 5-5, United States skip John Shuster provided some last-rock magic with a pinpoint double take-out for five that left their Swedish opponents stunned as the Gangneung Curling Centre erupted into chants of “USA, USA” led by U.S. President Donald Trump’s daughter Ivanka.

The gold was just the second Olympic curling medal won by the U.S. men, following a bronze at the 2006 Turin Winter Games which Shuster was also a part of.

Switzerland beat Canada 7-5 on Friday to win the bronze.

“I think during the entire (eighth) end we could feel it building,” said Shuster. “Their margin for error was incredibly small. I can’t tell you how un-nervous I was.”

The victory capped a remarkable comeback for the United States who sputtered through early preliminary-round play with a 2-4 record before rattling off three straight wins to make the playoffs where they beat twice defending Olympic champions Canada in the semi-finals before seeing off the top-ranked Swedes.

The only real miscue involving the Americans on Saturday came when officials mistakenly presented them with the women’s gold medals but that error was quickly corrected and switched for the correct ones.

”We’ve played our best when our backs were up against the wall,“ American second Tyler George. ”We took it to another level this week.

“Usually we’re fighting and scrapping to get into the playoffs but for five days we were the best team in the world and we did it at the right time.”

The result meant more Olympic disappointment for Niklas Edin who had skipped Sweden to world championship titles in 2013 and 2015 and a bronze at the Sochi Olympics but could not grab the one medal to elude him.

The contest got off to a tactical start with the Swedes blanking the first then scoring a pair in the second only to have the U.S. hit right back with a two on another brilliant last-rock shot from Shuster.

The U.S. stole a point in the fourth after a measurement to determine shot stone to take their first lead, 3-2.

The Swedes would not be rattled, answering with two in the fifth as the seesaw battle continued with the U.S. replying with a pair in the sixth and Sweden getting one back in the seventh to leave the teams deadlocked on 5-5 with three ends to play.

After the U.S. scored their five a reeling Sweden chipped two off the deficit in the ninth but there was too much damage to repair and the Swedes finally conceded.

“In the eighth end we don’t exactly get the rocks where we wanted them and they put a lot of rocks in the house and we were forced to go all in,” explained Edin.

“That last shot if it curls three centimeters more it’s probably good for them to draw for two or something but when that misses and they make that double we knew we were going to lose.”

The Big Read: Enough is enough. Just what does it take to break mental health stigma at the workplace?
Police warn against phishing scam that uses fake Pizza Hut advertisements
Uyghur Convicted of Terrorism in Indonesia Pleads For Asylum After Comrades Deported to China
Indonesian volcano erupts, forcing residents to flee
Woman gets jail for pouring hot water on boyfriend’s groin over cheating suspicions