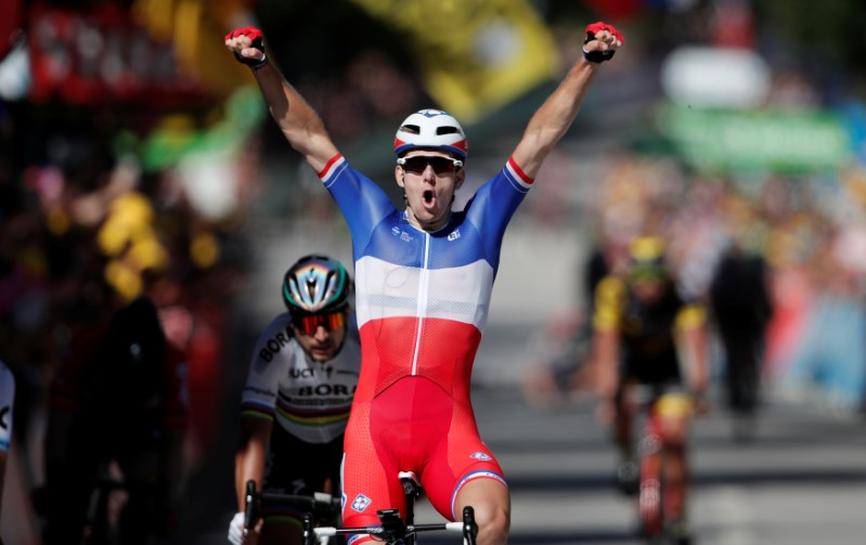 VITTEL, France French champion Arnaud Demare claimed his maiden Tour de France stage win when he powered to victory in a crash-marred finale on the fourth day on Tuesday after a 207.5-km ride from Mondorf-les-Bains in Luxembourg.

British sprinter Mark Cavendish came down in a crash at full speed within a hundred meters of the finish line after being elbowed off balance by world champion Peter Sagan, who took second place but could face sanctions over the incident.

Cavendish, who has 30 Tour stage wins to his name, was trying to race up along the safety barrier on the right-hand side of the road.

“He was coming from behind, I did not have time to react and go left,” said Sagan, who afterwards went to Cavendish’s team bus to apologize.

German John Degenkolb, the 2016 Paris-Roubaix champion, also crashed as he ran into Cavendish on the ground.

The Briton of the Dimension Data team eventually got back on his bike and crossed the line after being attended to by race medics. Cavendish, wearing a sling, was later taken to hospital for checks on his wrist and collarbone.

The race’s yellow jersey holder, Geraint Thomas, hit the deck in a separate pile-up near the end, but as the incident occurred within the final three kilometers he will be credited with the same time as the winner.

Both Thomas and defending champion Chris Froome, who was held up behind the crash, are fine, Team Sky said.

“I went to the ground, but no serious damage,” said Thomas, who was also brought down in a crash on Sunday.

Norway’s Alexander Kristoff (Katusha) came home third as FDJ rider Demare, who has been in impressive form lately, had time to raise his arms in celebration before crossing the line.

Demare took the green jersey for the points classification in the process.

Wednesday’s fifth stage should see the top guns in action as the 160.5-km ride from Vittel will end up La Planche des Belles Filles, a lung-busting 5.9-km climb at an average gradient of 8.5 percent.