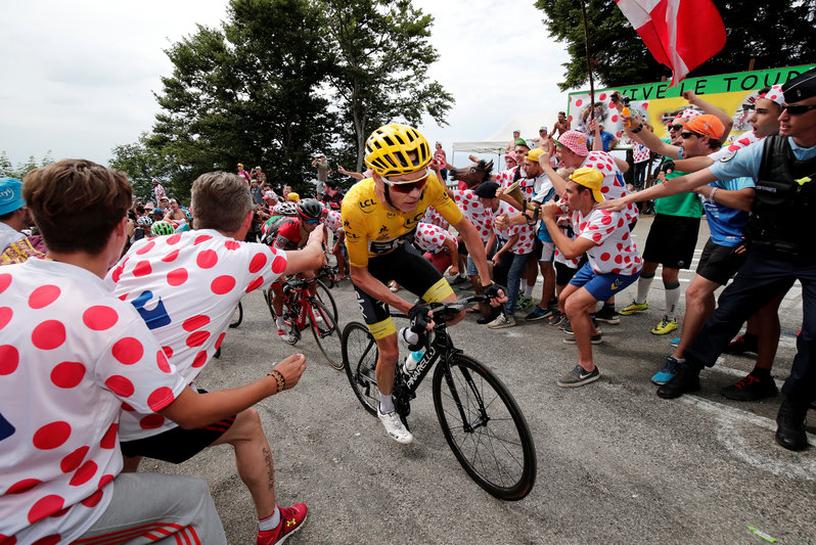 CHAMBERY, France Chris Froome escaped unscathed after an action-packed ninth stage of the Tour de France as one his main rivals and his Team Sky lieutenant crashed out of the race on Sunday.

The defending champion, who was attacked by Fabio Aru just as he suffered a mechanical on the last climb, ended up third at the end of a 181-5km trek in the Jura mountains won by Colombian Rigoberto Uran ahead of France’s Warren Barguil.

Briton Froome had his rivals to thank, however, as none of them took turns in front while he was changing his bike in the lung-busting ascent to the Mont du Chat.

The scene was reminiscent of the 2010 Tour when Alberto Contador attacked Andy Schleck on the ascent to the Port de Bales when his rival’s chain snapped.

“I had a mechanical problem with my gears, I had to change bike,” said three-times champion Froome.

“I want to thank the other riders, who did not attack,” he added, saying he did not see Aru attacking past him as he raised his arm to ask for assistance.

“Richie (Porte) was quite instrumental in slowing that group down, saying this is not the time to attack the leader of the race, so thanks to Richie and I hope he makes a speedy recovery.”

Froome was already without team mate Geraint Thomas, who abandoned after crashing in the slippery descent of the Col de la Biche, one of three out-of-category ascents of the day.

In the final descent to Chambery, Australian Porte, regarded as Froome’s main challenger ahead of the three-week event, went off the road into a wall of rocks.

“He was conscious, it’s reassuring, he is being transferred to the hospital,” race doctor Florence Pommery said.

Last year’s runner-up Romain Bardet of France pedaled away in the final descent but was reined in by Froome, Uran, Barguil, Aru and his Astana team mate Jakob Fuglsang two km from the finish line.

“There will be other great battles to fight in the Pyrenees and the Alps,” Bardet said after taking fourth place.

Uran also had a mechanical and was forced to ride the final kilometers on a single gear.

“The difference between Rigo and the other riders I know is that he never loses his cool,” his Cannondale-Drapac team manager Jonathan Vaughters told reporters.

Overall, Froome leads Aru by 18 seconds and Bardet by 51 as two-times winner Contador, who crashed twice, cracked on the last climb and dropped out of contention.

Uran is fourth, 55 seconds off the pace while Astana look set to work as a double act from now on as Dane Fuglsang is fifth, 1:37 behind Froome.

Three-times podium finisher Nairo Quintana of Colombia also struggled, losing 1:15 to Froome and his group. He is now eighth overall, a massive 2:13 off the pace.

Monday is a rest day and the fight for the overall title is set to resume next Thursday with the first big Pyrenean stage.

In-form Porte, however, will not be contesting it after a high-speed crash ruined his chances, with the Australian taking down Ireland’s Dan Martin with him.

Quick-Step Floors’ Martin got back on his bike but crashed again before limiting the damage on the line. He is now sixth overall, 1:44 behind Froome.

French champion Arnaud Demare, who was targeting the green jersey for the points classification, missed the time cut, as well as the three FDJ team mates who were helping him, meaning the four are now out of the race.