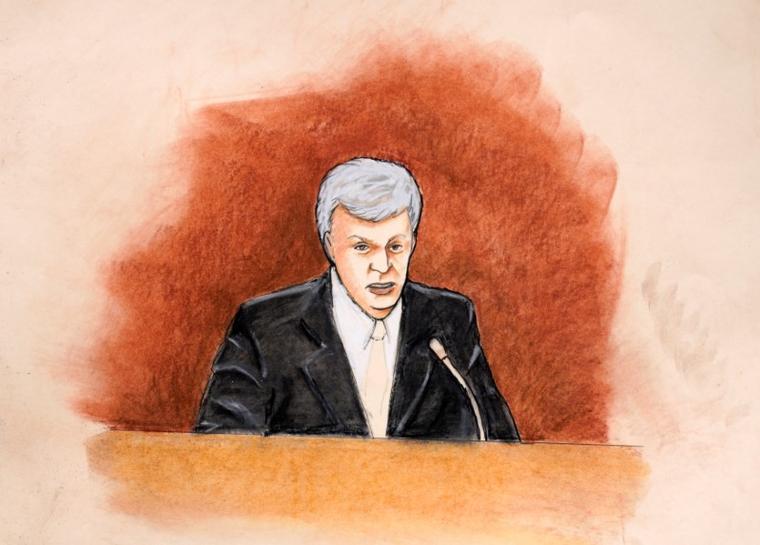 David Mueller, who lost his job at Denver radio station KYGO-FM over his encounter with Swift, testified on Tuesday that he made incidental physical contact with the singer as the two posed for pictures together, perhaps brushing her arm or torso.

But he insisted he was innocent of any inappropriate behavior and a victim of false accusations that “cost me my career, my passion, my income.”

“I want to clear my name,” Mueller, 55, said on the witness stand in the first day of testimony for the trial stemming from Swift’s allegations. “It’s a humiliating experience to be accused of something so despicable.”

Swift’s attorney, J. Douglas Baldridge, sought to cast Mueller on Tuesday as an opportunist who assaulted his client and was now seeking “to make the victim pay the price.”

In his cross-examination of the disc jockey, Baldridge noted Mueller did not sue the radio station or its management over his termination and had hired an expert who calculated Mueller stands to lose as much as $3 million in future earnings.

A sketch of Taylor Swift and her attorneys in Denver Federal Court during the Swift groping trial in Denver U.S. August 8, 2017.Jeff Kandyba

“Is that enough to clear your name?” he asked Mueller rhetorically.

Mueller initiated the litigation, claiming Swift fabricated the groping story and pressured the radio station to fire him. Swift countersued for assault and battery. The eight-member U.S. District Court jury is now weighing both claims in a single trial.

According to the Grammy-winning artist, Mueller slipped his hand under her dress and grabbed her bare buttocks as the two posed, along with Mueller’s girlfriend, during a meet-and-greet session before a June 2013 concert in Denver.

“It was not an accident, it was completely intentional, and I have never been so sure of anything in my life,” Swift, 27, said in a deposition. She is expected to take the witness stand later in the trial.

Asked by his own lawyer on Tuesday whether he had grabbed Swift’s backside, Mueller said flatly, “No, I did not.”

Mueller testified he had no inkling anything was amiss until approached that evening by a member of Swift’s security team who related her allegation to him, threatened to call police and told Mueller he was banned from all future Swift concerts.

Commentary: My harrowing brush with COVID-19 in New Delhi as India is ravaged
Flash mobs in Myanmar’s biggest city avoid deadly response
Singapore passports to be valid for 10 years for applications from October
India accounts for 46% of world’s new COVID-19 cases, quarter of deaths
WHO classifies India COVID-19 variant as being of global concern