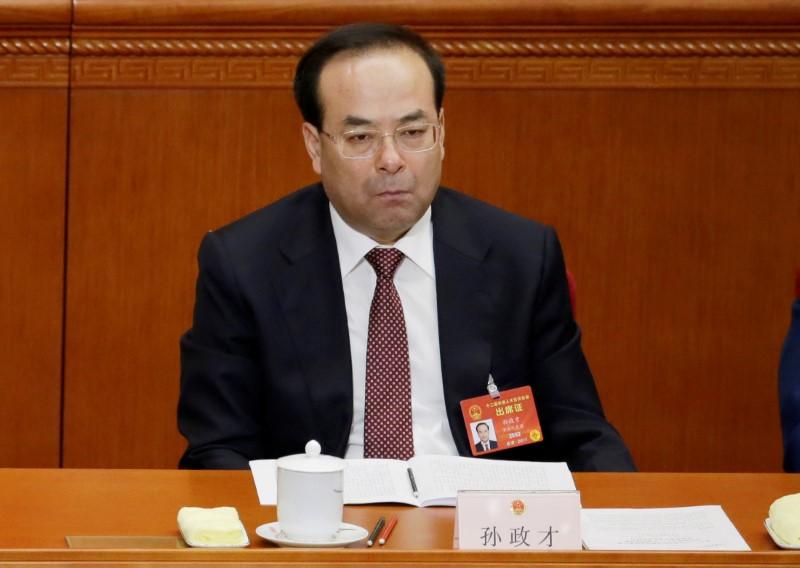 BEIJING (Reuters) – Chinese prosecutors have charged disgraced senior politician Sun Zhengcai with bribery, state media said on Tuesday, the latest development in a corruption probe into a man once considered a contender for top leadership.

In a flurry of activity before the week-long Chinese Lunar New Year break begins on Thursday, the ruling Communist Party also announced it would prosecute the former head of China’s internet regulator for graft.

Sun was abruptly removed from his post as the ruling Communist Party’s chief of the southwestern metropolis of Chongqing – one of China’s most important cities – in July, and replaced by Chen Miner, who is close to President Xi Jinping.

He was later accused of leaking secrets, bribery and abusing his power, and in November was expelled from parliament, removing his immunity from prosecution that he had enjoyed as a member of that body.

It has not been possible to reach Sun or a representative for comment since he was put under investigation.

Sun was charged with bribery for “illegally accepting a huge amount of assets from others” during various posts going back 15 years in Chongqing, Beijing, Jilin province, and as Minister of Agriculture, the official Xinhua news agency said, citing prosecutors.

His case had been sent to the first intermediate court in the northeastern city of Tianjin, Xinhua said.

In a separate statement, the party’s anti-corruption watchdog said former internet chief Lu Wei had been expelled from the party and would be prosecuted for bribery.

A party probe found that Lu was “arbitrary and tyrannical”, abusing his power for personal gain and pretending to follow the rules when in fact he was doing the opposite, the watchdog said.

Lu, who was put under investigation in November, “had no shame”, it added. It was also not possible to reach Lu or a representative for comment.

At the height of his influence, Lu, a colorful and often brash official by Chinese standards, was seen as emblematic of China’s increasingly pervasive internet controls.

The next likely step against Sun will be to put him on trial, where he is certain to be found guilty as the courts are controlled by the party and will not challenge the accusations against him.

Chongqing is perhaps best known outside China for its association with Bo Xilai, another disgraced former party boss of the city. He too was once a contender for top leadership, but was jailed for life in 2013 after a dramatic corruption scandal.

The official Chongqing Daily said Chen chaired a meeting of the municipality’s standing committee on Monday, vowing to “resolutely purge” Sun’s “pernicious influence” and safeguard Xi’s authority as core leader of the party.

The meeting decided that Sun had inflated political ambitions and selfish desires and must be punished severely for damaging the party’s image, national interests and the sanctity of law.

Xi has presided over a sweeping corruption crackdown since coming to power in 2012 and has vowed to target both “tigers” and “flies”, a reference to elite officials and ordinary bureaucrats.

The campaign has seen the jailing or punishment of hundreds of thousands of officials and also brought down dozens of senior party and military officials.

The crackdown has not just been focused on issues like bribery and using public money to fund lavish lifestyles. It has also taken aim at those whose political loyalty is found lacking or who express doubt in public about party policies.

China has rebuffed criticism that the anti-graft campaign is as much about settling political scores as about stamping out genuine criminal acts.