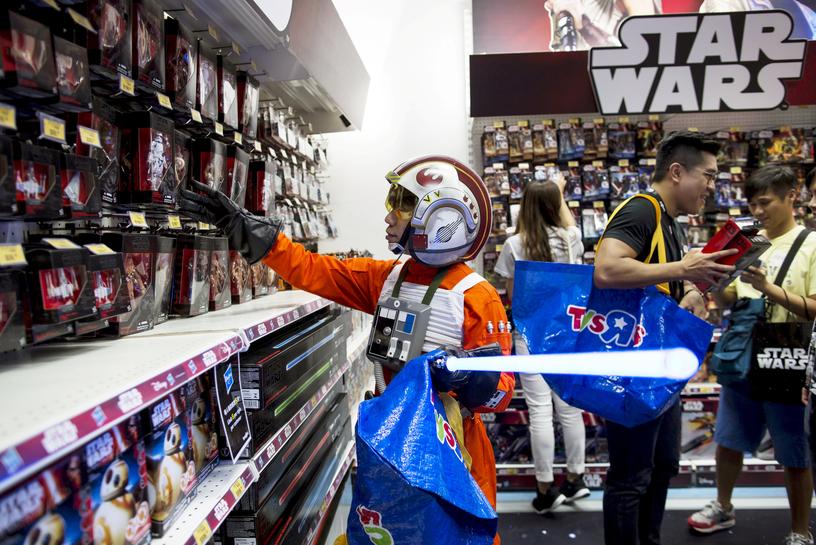 LOS ANGELES (Reuters) – Walt Disney Co will send “Star Wars” characters into the realm of augmented reality next week to draw fans into stores as they release new merchandise tied to upcoming movie the “The Last Jedi,” the company said in a statement on Thursday.

Starting at 12:01 a.m. PDT (3.01 a.m. ET) on Sept. 1, more than 20,000 retail locations in 30 countries will feature displays that fans can scan with their smartphones to reveal characters such as Rey or Chewbacca. Using augmented reality technology, users will see the characters overlaid on their surroundings by looking through their phone’s cameras, and can take photos or videos with them.

Disney is tapping into the trend of augmented reality, or AR, which first gained mass adoption in July 2016 with the release of Niantic Inc’s Pokemon Go game.

The hunt for “Star Wars” characters is scheduled to last three days and will coincide with “Force Friday II,” the day retailers start selling toys and other products tied to “The Last Jedi” with midnight openings around the world.

The retailers include Wal-Mart Stores Inc, Target Inc, Best Buy Co Inc and Apple Inc stores. “Last Jedi” merchandise will also be sold online, and the AR characters will be accessible via some websites.

“Star Wars,” one of Disney’s most important franchises, was the U.S. toy industry’s top-selling property for 2015 and 2016, with $1.5 billion in sales over the two years, according to research firm NPD. “The Last Jedi,” the eighth movie in the “Star Wars” film saga, arrives in theaters in December.