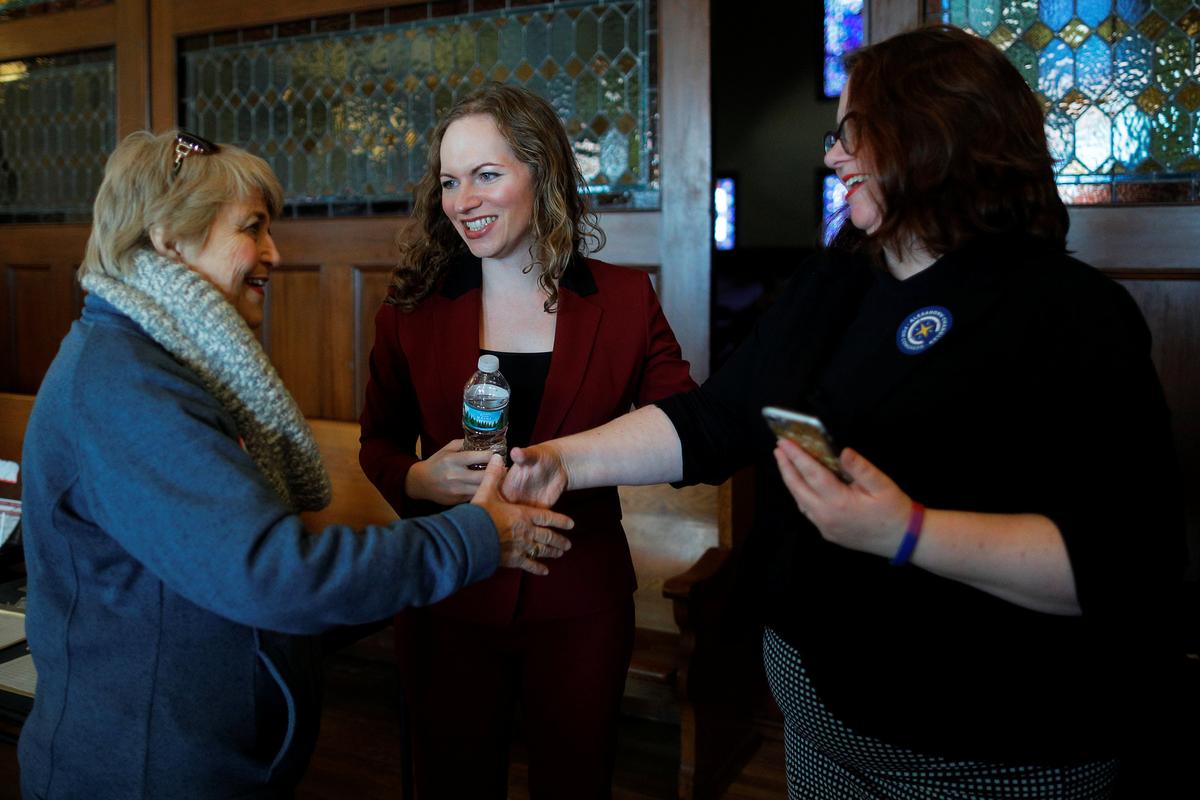 (Reuters) – Alexandra Chandler was a U.S. Navy intelligence analyst when she came out as a transgender woman in 2006. She could have been fired, but instead she said the conservative Republicans in her chain of command promoted her to division chief.

A decade later, that kind of acceptance was overshadowed by what Chandler called the hate and divisive language of Republican presidential candidate Donald Trump’s 2016 campaign, prompting her to run for the U.S. House of Representatives.

“The real simplistic answer to why I‘m running: It’s to answer a call. It’s to a answer a call to service like I did after 9/11,” said Chandler, one of more than a dozen Democrats seeking the nomination in the third district of Massachusetts.

In his first year in office, President Trump has weakened LGBT protections in employment, schools and housing and has appointed officials and judges seen as hostile to LGBT rights.

Chandler is among an estimated 40 transgender candidates running for all levels of government in the November 2018 elections, an unprecedented number. Many of the candidates will have the backing of advocacy groups such as Human Rights Campaign (HRC), the largest lesbian, gay, bisexual and transgender civil rights organization in the United States.

HRC’s $26 million commitment to the elections, nearly as much as it spent in the 2012 and 2016 campaigns combined, is part of a push to regain momentum after Trump became president and Republicans kept control of Congress.

The White House and the Republican National Committee did not respond to requests for comment on the LGBT advocates’ strategy.

While gays and lesbians have been elected for decades, openly transgender candidates are rarer, making it remarkable last year when eight won elective office, the most recorded in the United States.

In addition to those who have declared their candidacies this year, nearly as many parents of transgender children are also running, said Mara Keisling, executive director of the National Center for Transgender Equality, the leading trans advocacy group.

HRC has created a database of 52 million pro-LGBT voters who can be deployed to get out the vote for candidates who support LGBT rights. Those voters in the database, who showed support for equal rights for LGBT people, amount to 37 percent of the 139 million Americans who voted in the 2016 general election, and about 5 percent of the electorate has identified as LGBT in exit polls.

“This is a voting bloc that has to be respected, and sought after, and feared,” said Chad Griffin, president of the Human Rights Campaign.

The database will enable the group to target voters in any particular district, whether for or against a candidate or ballot initiative, or simply to mobilize people for a debate before a local school board.

Social conservatives say LGBT advocates may be overplaying their hand, calling them out of touch with heartland voters and suggesting transgender campaigning may backfire in districts where Trump has strong support.

“I don’t think the transgender issue is going to be a winning issue for the Democrats or those on the left,” said Peter Sprigg of the Family Research Council, a conservative Christian and lobbying group.

The use of voter demographics and commercial data, known as microtargeting, has been part of U.S. politics for at least a decade. It has grown more sophisticated with each election cycle, reflecting the increasing importance of getting out the vote and generating enthusiasm among a party’s core supporters.

This is the first year in which microtargeting will be put to work on such a wide scale on behalf of LGBT candidates.

Chandler, the former intelligence analyst, has captured plenty of attention from LGBT groups. She has been endorsed by the Trans United Fund. She took a four-day LGBT candidate course with the Victory Institute, which specializes in such training, and she has long worked with the National Center for Transgender Equality.

Chandler is already campaigning, emphasizing her 13 years of working for the military, the need to improve healthcare policies, tackle an opioid abuse crisis and to create jobs. She says she understands those issues as a working mother.

“I’ve had Trump voters who say they’re going to vote for me. There is a hunger for something different,” Chandler said.

Nonetheless, transgender groups said they will be doubling their efforts.

The transgender center’s Keisling said that while Republicans are typically better at voter turnout, “this year Democrats and progressives and immigrants and people of color and trans people are so angry and so scared, there’s never been more incentive to vote.”