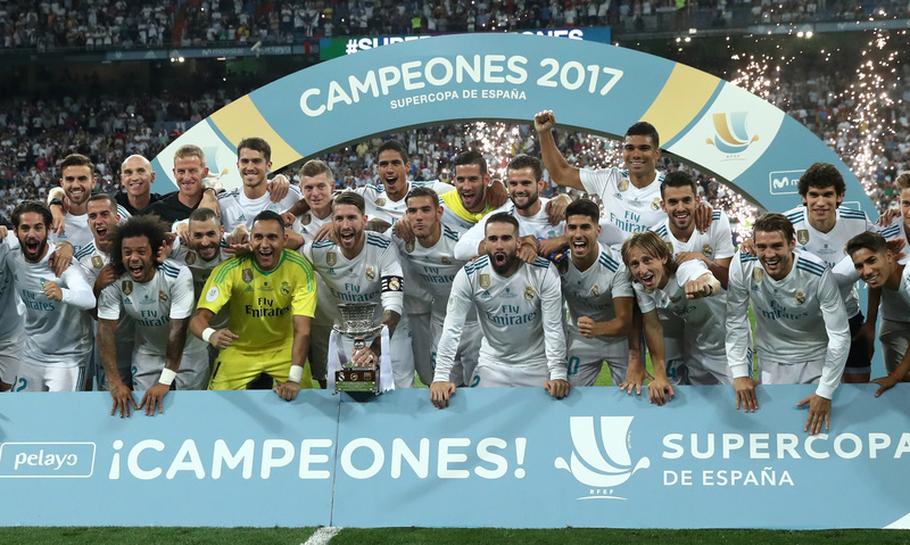 MADRID (Reuters) – Real Madrid won the Spanish Super Cup for the 10th time with a 2-0 win over rivals Barcelona at a joyous Santiago Bernabeu on Wednesday to complete a 5-1 aggregate victory that underlined their new status as Spain’s dominant force.

Marco Asensio followed up his brilliant late goal in Sunday’s first leg with a stunning effort from 30 meters in the fourth minute that proved a punishing blow for the Catalans.

Madrid, last season’s Spanish and European champions, dominated throughout, toying with Ernesto Valverde’s side and showing no sign that they were missing suspended forward Cristiano Ronaldo, or Gareth Bale who was on the bench.

Karim Benzema struck before halftime to seal their victory and although Lionel Messi and Luis Suarez both hit the woodwork, Barcelona left the Spanish capital with Madrid supporters’ chants of “Champions” ringing in their ears.

It was a bleak Barcelona display, which leaves Valverde with plenty of holes to patch before the start of the league campaign this weekend.

Madrid, meanwhile, have started where they left off last season, by adding more silverware to the trophy cabinet.

Coach Zinedine Zidane has this month added the Spanish and UEFA Super Cups to an already remarkable haul since taking over at the club in January 2016.

With Ronaldo banned having shoved the referee after he was shown a red card in the first leg, Asensio was given a starting spot and made an instant impact.

Suarez fired over at the other end, while Navas was quick off his line to deny Messi as he tried to cut inside from the right.

There were only a few flashes of inspiration from the usually imperious Argentine, who could not drag a poor Barcelona back into the match as Madrid kept control.

Gerard Pique’s acrobatic clearance whisked the ball away from a stooping Benzema as he tried to head home Lucas Vazquez’s cross, before the Frenchman eventually found the net.

The second goal had been coming, with Vazquez striking the post minutes earlier, and it eventually arrived when Marcelo sent in a low cross which Benzema finished with aplomb in the 38th minute.