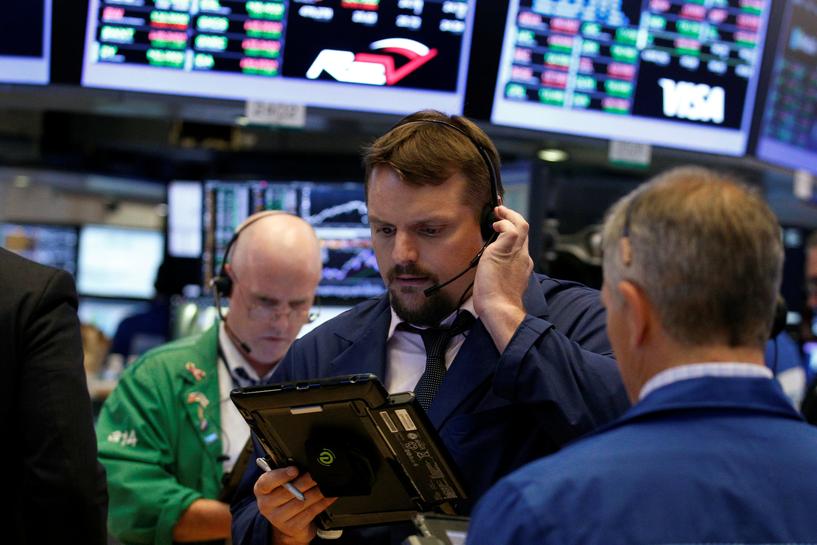 Data showed consumer prices were unchanged in June and retail sales fell for a second straight month, pointing to tame inflation and subdued expectations of strong economic growth in the second quarter.

“The data is pointing to this continuation of fairly accommodative policy, which has obviously served the market well over the last few years. So as far as the market is concerned, it’s sort of more of the same,” said Lee Ferridge, head of macro strategy for North America at State Street Global Markets in Boston.

Chances of a rate hike in December fell to 48 percent after the release of data, from 55 percent late Thursday.

Earlier this week, the market rose after Federal Reserve Chair Janet Yellen said future rate hikes could be gradual in the face of persistently low inflation.

The S&P financials .SPSY, which benefit from a rising rate environment, fell 0.5 percent, and the group was the only one of the S&P 500 sectors down on the day.

The CBOE Volatility index .VIX closed at its lowest since December 1993.

The Nasdaq’s percentage gain for the week was its biggest so far this year.

The small-cap Russell 2000 index , which has underperformed the S&P 500 this year, also ended at a record high.

Four of the largest lenders beat analysts’ quarterly profit expectations by raising loan prices without paying much more for deposits. But analysts said investors had wanted to see even better results and hear a rosier outlook from executives.

JPMorgan Chase was down 0.9 percent, while shares of Citigroup (C.N) were down 0.4 percent and Wells Fargo (WFC.N) fell 1.1 percent.

“In the past few weeks, (financial) stocks have been very strong. There’s been just a little bit of a sell on the news, but afterward, you buy on the idea of a good quarter,” said Peter Tuz, president of Chase Investment Counsel in Charlottesville, Virginia.

The financial index was down 0.7 percent for the week after rising 1.5 percent the week before.

Bank of America (BAC.N), Goldman Sachs (GS.N) and Morgan Stanley (MS.N) all are due to report results next week.

Analysts estimate second-quarter earnings for the S&P 500 companies rose 8.1 percent from a year earlier. First-quarter earnings posted their best performance since 2011, according to Thomson Reuters.

Earnings will be closely watched to see if high valuations are justified in the face of tepid inflation and a recent patch of mixed economic data.

Amazon.com Inc < AMZN.O> shares rose 0.1 percent. The company has raised flags in Washington, with a Democratic lawmaker calling for a hearing on how Amazon’s plans to buy Whole Foods Market Inc (WFM.O) will potentially impact consumers. The deal, announced in June, marks the biggest acquisition ever for the world’s largest online retailer.

Advancing issues outnumbered declining ones on the NYSE by a 2.54-to-1 ratio; on Nasdaq, a 1.29-to-1 ratio favored advancers.

About 5.3 billion shares changed hands on U.S. exchanges. That compares with the 6.7 billion daily average for the past 20 trading days, according to Thomson Reuters data.

Additional reporting by Caroline Valetkevitch in New York and Tanya Agrawal in Bengaluru; Editing by Nick Zieminski and Leslie Adler