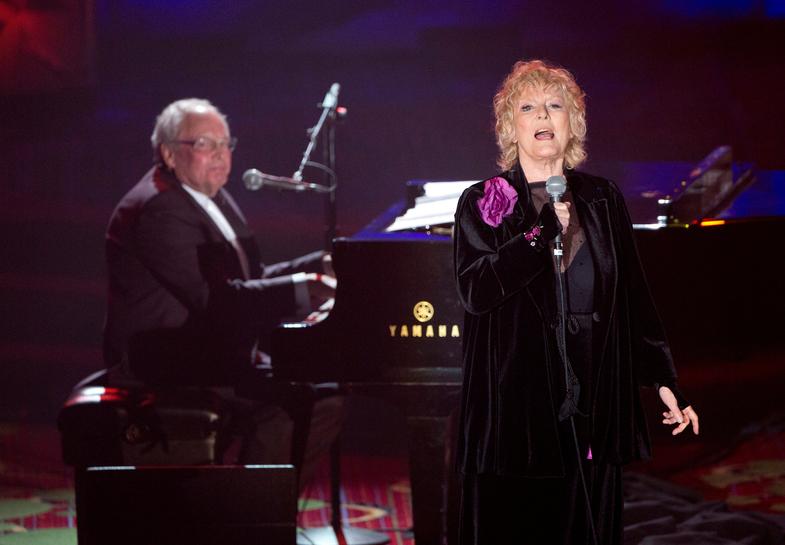 CROPREDY, England (Reuters) – Grammy award-winner Petula Clark sang her global hit “Downtown” about as far from “where the neon signs are pretty” as she could at the weekend — to thousands in a field in rural England.

It was the 84-year-old’s first outdoor festival in a career spanning, well, eight decades.

Clark’s set at the Fairport Cropredy Convention included some of her other ’60s hits, including “Colour My World”, “I know a Place” and “Don’t Sleep in the Subway”, but also new songs from her latest album “From Now On”.

Indeed, she is working on a new album of French-Canadian songs ahead of a tour next May.

As might be expected, Clark closed her Cropredy show with her biggest hit, “Downtown”, leading the crowd as they sang along with the chorus.

“Downtown” topped the U.S. Billboard Hot 100 in 1964, reached number two in the UK chart, won Clark her first Grammy and was inducted into the Grammy Hall of Fame in 2003.

Clark, whose career stretches back to World War Two, when she sang on BBC radio to entertain British troops aged nine, has never shied from breaking new ground.

In the 1950s, she moved to Paris and recorded numerous songs in French, working over the years with the likes of Jacques Brel, Serge Gainsbourg and Charles Aznavour. Her website lists 10 “gold record” singles that have sold a million copies, including one each in French and German.

She has appeared in numerous films, including singing and dancing with Fred Astaire in 1968’s “Finian’s Rainbow” directed by Francis Ford Coppola.

The same year, in a U.S. TV special, she sang a duet with African-American singer and civil rights activist Harry Belafonte. As they sang the anti-war song “On the Path of Glory” co-written by Clark, she touched his arm — to the dismay of the show’s sponsors.

A white woman touching a black man on television was taboo in 1960s America.

To head off the sponsors, Clark’s team destroyed all other takes.

“We were not going to be told what to do and what not to do,” she said. “Maybe I was naive. It seemed to me like a storm in a teacup but of course it was that particular time in that particular country.”

A U.S. tour in November and December takes Clark from California to New York. Then she plays eight dates in French Canada, where she will perform in French.

So no plans to slow down?

“Not at the moment. My voice is in great shape. I don’t really do anything to help it, I just go out and do it,” she said.