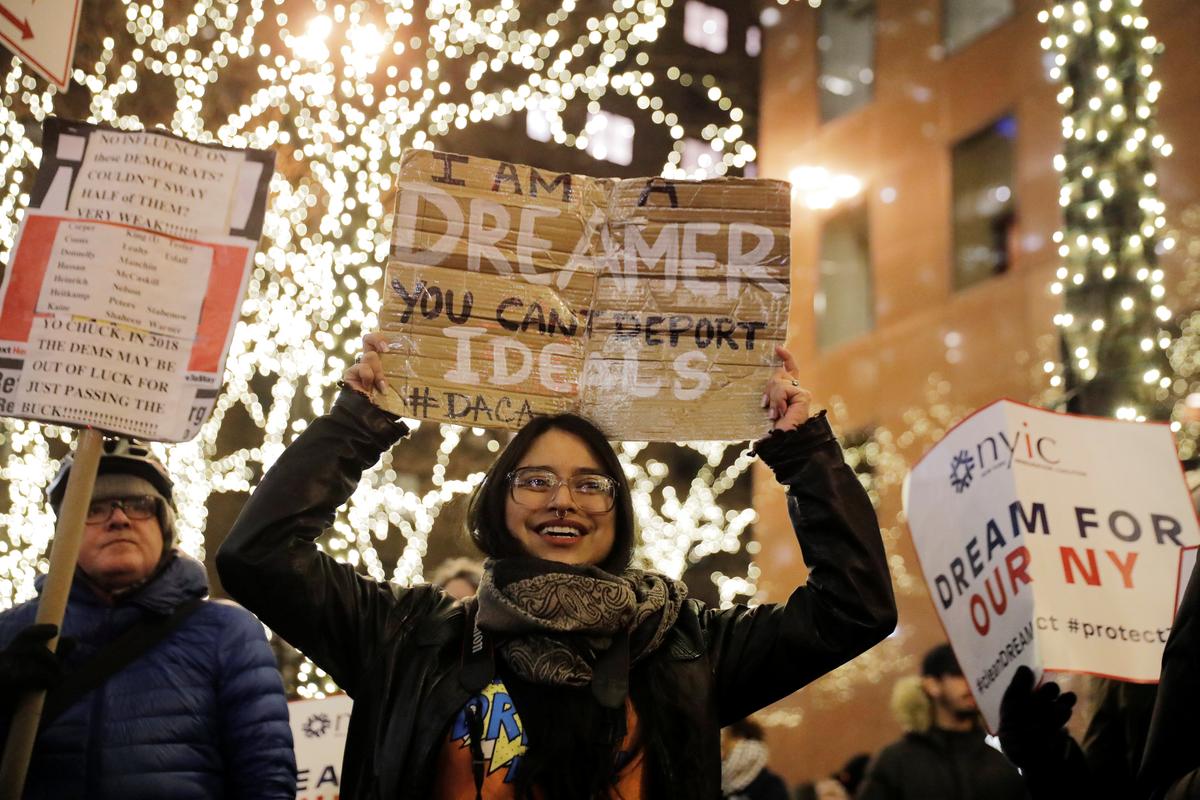 NEW YORK (Reuters) – Jovan Rodriguez plans to go underground if protections for immigrants brought illegally to the United States as children expire, giving up on dreams of a master’s degree and a career in New York’s glittering theater world.

In his fourth-floor walkup apartment in an artsy, working-class section of Brooklyn, Rodriguez obsesses over his future starts as soon as he wakes each morning and checks his phone for the latest headlines about the Obama-era program rescinded by Republican U.S. President Donald Trump.

“The biggest impact … would be being forced back into the shadows,” said Rodriguez, 27, who has lived in the United States since his parents brought him from Mexico when he was three.

His fate, and that of around 700,000 other so-called “Dreamers,” is the subject of intense negotiations in Congress this week on whether to save the Deferred Action for Childhood Arrivals program, or DACA, which allowed the young immigrants to live and work in the country legally and avoid deportation.

If the program ends, so will Rodriguez’s life as he knows it: he could lose his job, his apartment, even the ability to legally board an airplane.

The young immigrants would also not be allowed to drive in many states. Because they had to submit their parents’ names and addresses as part of their applications to the program, family members would be at risk of detention or deportation.

“The cruelty of forcing them back into the shadows is pretty hard to believe,” said Ethan Dettmer, a San Francisco attorney challenging the rescission in court.

Some Republicans who favor ending DACA say President Barack Obama did not have the authority to set up the program, and argue that allowing Dreamers to stay in the United States, even though they were children when they came, is effectively granting an amnesty to illegal immigrants.

On Friday, Trump rejected an immigration plan by a group of six Republican and Democratic senators that would protect young “Dreamers” from deportation. The president said the deal would force the United States to admit people from “high crime” countries “doing badly.”

The battle playing out in Washington and the courts has left Rodriguez and roommate Gloria Mendoza, his best friend from high school and a fellow DACA beneficiary, feeling both unbalanced and invigorated as they have joined protests against the Trump administration.

“We found power in telling our story,” Rodriguez said.

His family settled in Fort Worth, Texas, more than two decades ago after overstaying a tourist visa. They sat on overturned buckets instead of chairs at dinnertime, their plates on their laps because there was no table in their small, spare apartment.

Mendoza, 27, remembers riding high on the shoulders of a smuggler as he waded across a river with her family during their trip from Mexico to Texas when she was nine.

Like Rodriguez, she became an A-student, falling in love with the theater in a class at the Fort Worth high school they both attended.

When the class went to New York to see Broadway shows, Rodriguez and Mendoza realized they did not have identification documents to show at airport security. Determined to go, they took a bus and met up with the class after days of travel.

When the time came for college applications, they could not fill out financial aid forms without papers showing proof of residency. Ultimately, they both attended a sympathetic school after a teacher intervened.

DACA, which began in 2012, changed their fortunes. Soon after his acceptance into the program, Rodriguez moved to New York. Mendoza followed.

They both have day jobs at a pizzeria and chase work making props and building sets. Rodriguez is trying to save two months’ worth of rent in case they lose their legal status and their jobs.

When they feel really stressed by their circumstances, they light a row of 25 candles atop their kitchen cabinets in holders emblazoned with drawings of Jesus and the Sacred Heart.

“We’re not going anywhere,” Mendoza said. “We’re still going to strive for our personal goals. But it will be harder.”