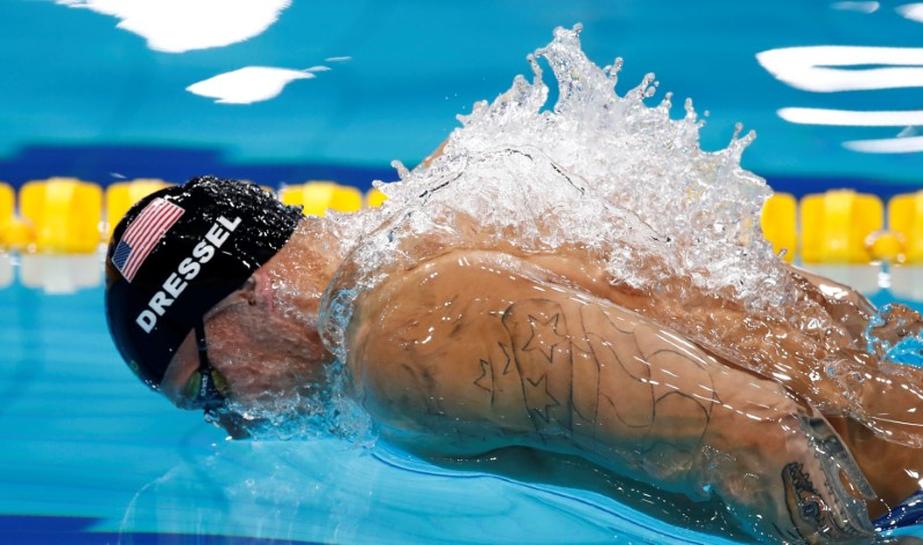 BUDAPEST (Reuters) – Caeleb Dressel of the United States became the first swimmer to win three gold medals in a single evening at the world championships after producing a trio of storming performances on Saturday.

Dressel’s sprint heroics were compiled in just under two hours, interspersed by Sarah Sjostrom’s world record in the women’s 50 metres freestyle on another stunning night’s racing at the Duna Arena.

With the men’s 4x100m medley to come, he needs one more title to draw level with Michael Phelps’s record of seven golds at the 2007 championships.

“It was physically challenging, mentally straining with lots of emotional energy,” Dressel said of his night’s work. “You have to enjoy the moment and refocus very quickly.”

“I don’t consider myself a talented guy, but I’m sure a hard worker,” said Fratus.

The 20-year-old Dressel then had 33 minutes to ready himself for the men’s 100m butterfly.

He never trailed and delivered two lengths of sizzling pace in 49.86 seconds. Edging ever closer to Phelps’s 2009 world record, he finished 0.04 seconds shy of the eight-year-old mark.

“I honestly didn’t expect to be that close,” Dressel told reporters.

Dressel’s speed, coupled with the sheer noise inside the arena, clearly lifted Kristof Milak of Hungary who posted a world junior record time for silver.

After just over an hour to recover, Dressel then led the U.S. quartet out in a world-record rout in the 4×100 metres mixed freestyle relay.

The top-ranked Sjostrom had cut a disconsolate figure after missing out on 100m freestyle gold on Friday but she returned brilliantly to win the 50m butterfly final, recording the fastest ever indoor time of 24.60 seconds and touching 0.17 seconds outside of the world record she set at an outdoor event in Sweden three years ago.

Ranomi Kromowidjojo of the Netherlands took silver. She held off Farida Osman by 0.01 seconds, the Egyptian setting an African record for bronze.

Sjostrom then went one better in the 50m freestyle semi-finals as she shaved 0.06 seconds off Britta Steffen’s 2009 world-record time of 23.73 seconds.

Hopes had rested heavily on Seebohm with Australia on the cusp of finishing without a world title for the first time in 31 years.

Amid a cacophony of noise, Seebohm shut out the pressure to clock two minutes 05.68 seconds, an Oceanic record, as her final arm stretch was enough to hold off local hope Katinka Hosszu by 0.17 seconds. Kathleen Baker of the U.S. took bronze.

To end the night, the U.S. freestyle team’s victory never looked in doubt.

The defending champions finished more than three seconds ahead of their 2015 mark. The Netherlands won silver, with Canada taking bronze.