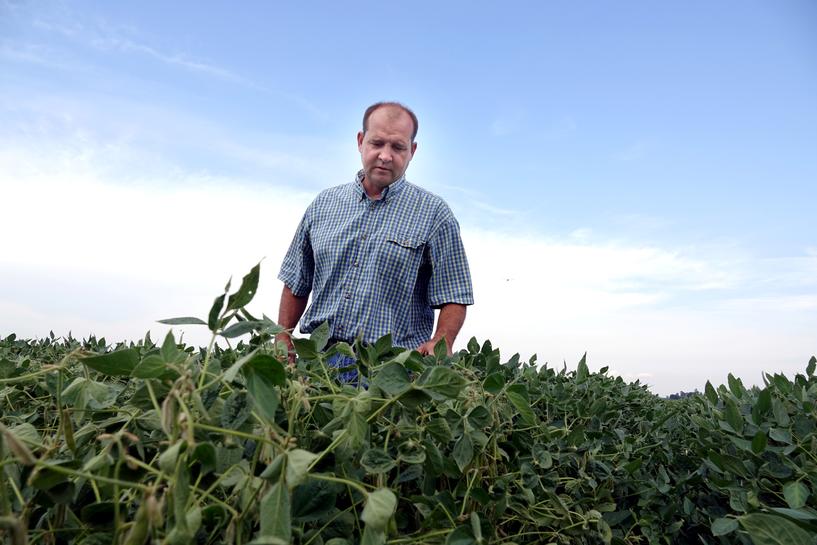 The herbicide, known as dicamba, has long been employed in the United States to kill weeds before fields were planted, but its use spiked after regulators last year approved a new formulation that allowed farmers to apply it to growing plants.

That should have been good news for Weiss and hundreds of other farmers, who planned to use it to control hard-to-kill weeds in fields planted with crops bioengineered to survive the chemical.

Instead, farmers reported the agricultural chemical was drifting into neighboring fields and damaging crops unable to resist it. Last month, in response to the reports, Arkansas and Missouri temporarily banned its use.

The fallout from dicamba hit Weiss on two fronts: The drifting chemicals, he said, stunted his unprotected soybean crops and marked the plants with damaged, withered leaves.

Then came the ban, which meant he could no longer use the chemical on the dicamba-resistant soybeans and cotton it was meant to protect.

Crops have suffered damage across much of the farm belt. Governments in 17 states are investigating more than 1,400 complaints of dicamba problems covering 2.5 million acres, Kevin Bradley, a University of Missouri associate professor in the plant sciences division, wrote last week.

The three companies that sell the chemical in the United States for use on growing crops of soybeans and cotton, Monsanto Co (MON.N), BASF (BASFn.DE) and DuPont (DD.N), say their products have not always been used according to label instructions.

The situation is part of an evolving battle between farmers and pests that threaten their crops. For two decades, growers have sown crops genetically modified to resist chemicals such as glyphosate, popularly known as Roundup, allowing them to selectively kill all the weeds in a field.

But the weeds have rallied, developing resistance to many popular chemicals, prompting farmers to try alternatives such as dicamba.

It is unclear what is causing dicamba to drift into other crops, though agronomists say it could be caused by high winds or changes in temperature.

Complaints have been rampant. So far, Arkansas has received 760 reports from farmers of dicamba drift damage – a record for one product – spanning 209,000 acres, according to the state plant board.

The state has taken a tough stance against the chemical, banning its use for 120 days starting July 11. Missouri imposed a one-week ban starting July 8. Tennessee placed tight restrictions on when dicamba can be sprayed.

John Weiss looks over his crop of soybeans, which he had reported to the state board for showing signs of damage due to the drifting of Monsanto’s pesticide Dicamba, at his farm in Dell, Arkansas, U.S. July 25, 2017. Picture taken July 25, 2017.Karen Pulfer Focht

The Arkansas State Plant Board relies on the “honor system” to enforce its ban, said director Terry Walker. Violations are punishable by fines up to $25,000, he said.

The damaged crops and the subsequent bans have created tensions among some farmers. Lee Cole, a farmer in Hayti, Missouri, who said his soybeans looked like they had been burned by “a blowtorch” because of dicamba, doubts everyone will comply with the regulations.

“Even the best farmers, when you’re under pressure to get it done, you’re going to do whatever you’ve got to do.”

Farmers who lose bushels because of drift have little recourse, since U.S. crop insurance does not cover losses caused by dicamba, according to U.S. Agriculture Department guidelines.

Some farmers have filed lawsuits against dicamba producers, while others have turned on their neighbors, blaming them for ruined crops. In one case late last year, an Arkansas sheriff said a farmer fatally shot a neighbor over a dispute about crops damaged by dicamba, according to media reports.

Many farmers, such as Brad Doyle, have scrambled to find alternative ways to protect their crops. The Arkansas grower, who planted dicamba-resistant soybeans to re-sell through his seed business, said he chose to spray less-effective fomesafen to avoid dicamba drifting. He has deployed workers to pull weeds by hand.

“Options are running out,” he said.

Ted Glaub, who manages 30 farms in Arkansas, Missouri and Mississippi, said it would be a costly mistake to write off dicamba. “We need dicamba. We don’t have enough tools,” he said.

Farmers, regulators and the companies selling the pesticide are examining ways to control the drift. BASF, for instance, gave away 600,000 chemical spray nozzles to prevent the wrong ones from being used.

In Missouri, the department of agriculture consulted Monsanto, BASF and DuPont to develop new requirements for dicamba, including spraying only when wind is light and during certain hours. Penalties range up to $10,000 per violation.

The chemical companies must inform pesticide sellers and trained applicators of the restrictions, according to Missouri’s department of agriculture. A BASF spokeswoman said the changes are being flagged on industry websites and through media coverage, adding the company has spoken with retailers who sell the product.

Monsanto was consulted about Missouri’s requirements, but believes its current label directions are sufficient, Fraley said. A DuPont spokeswoman said it followed all special requirements in Missouri.

Some farmers said the efforts – particularly the bans – have revived damaged plants. Tom Burnham, who grows soybeans in both Arkansas and Missouri, is among them.

“Ever since we got the ban in Arkansas, my crop has really progressed, started to straighten up,” Burnham said.

Burnham added, however, that his Missouri crop shows fresh dicamba damage since the state’s ban lifted.