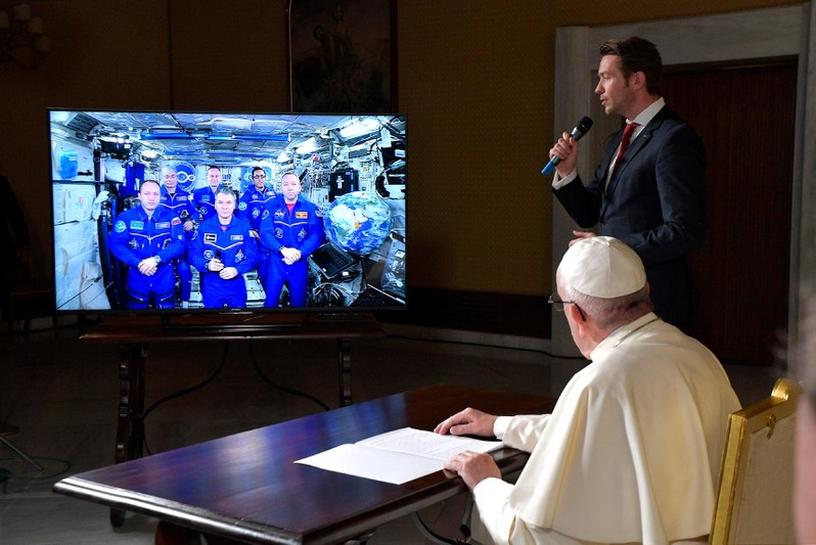 VATICAN CITY (Reuters) – The earth is a fragile thing that could even destroy itself, Pope Francis told astronauts on the International Space Station on Thursday, saying they had an opportunity to see the planet “from the eyes of God”.

Francis spent about 20 minutes in a video call to the six crew members on the space station, asking them several questions, sometimes with the gee-whiz wonder of a school boy.

“Hello ESA (European Space Agency) in the Vatican. This is Space Station. We hear you loud and clear.”

“Good morning or Good evening. Because when one is in space you never know,” the pope said from behind a desk with a television monitor in front of him.

The pope seemed moved by comments by mission commander Randy Bresnik, one of three Americans on board, who said what gave him the greatest joy in space was “to be able to look outside and see God’s creation maybe a little bit from his perspective.”

“People cannot come up here and see the indescribable beauty of our earth and not be touched in their souls,” Bresnik told the pope, adding, “there’s no borders, there’s no conflict; it’s just peaceful.”

In his response, the pope said Bresnik had “managed to understand that the earth is too fragile and it passes in a moment.”

“It is a very fragile thing, the atmosphere is thin, so capable of doing harm, of destroying itself, and you have gone to look at it from the eyes of God.”

Francis, the second pope to phone the space station – Pope Benedict did so in 2011 – has made many appeals for the protection of the Earth’s environment.

An encyclical, or major letter, he published in 2015 called for action to reduce the harm from global warming caused by human activity.

Sergey Ryazanskiy, one of two Russians on the space station, said he had decided to be a cosmonaut because his grandfather was one of the chief engineers who built Sputnik, the first artificial satellite, which the Soviet Union sent into a low Earth orbit in 1957 during the Cold War.

“Roots are our hope and our strength. Don’t forget roots,” Francis replied approvingly of the reference to being inspired by a grandfather.

Italian astronaut Paolo Nespoli, who acted as translator for his Russian and American crew mates, thanked the pope for coming “on board” and “for taking us higher.”

Then a voice from mission control announced: “Station: We are now resuming normal operational communications.”