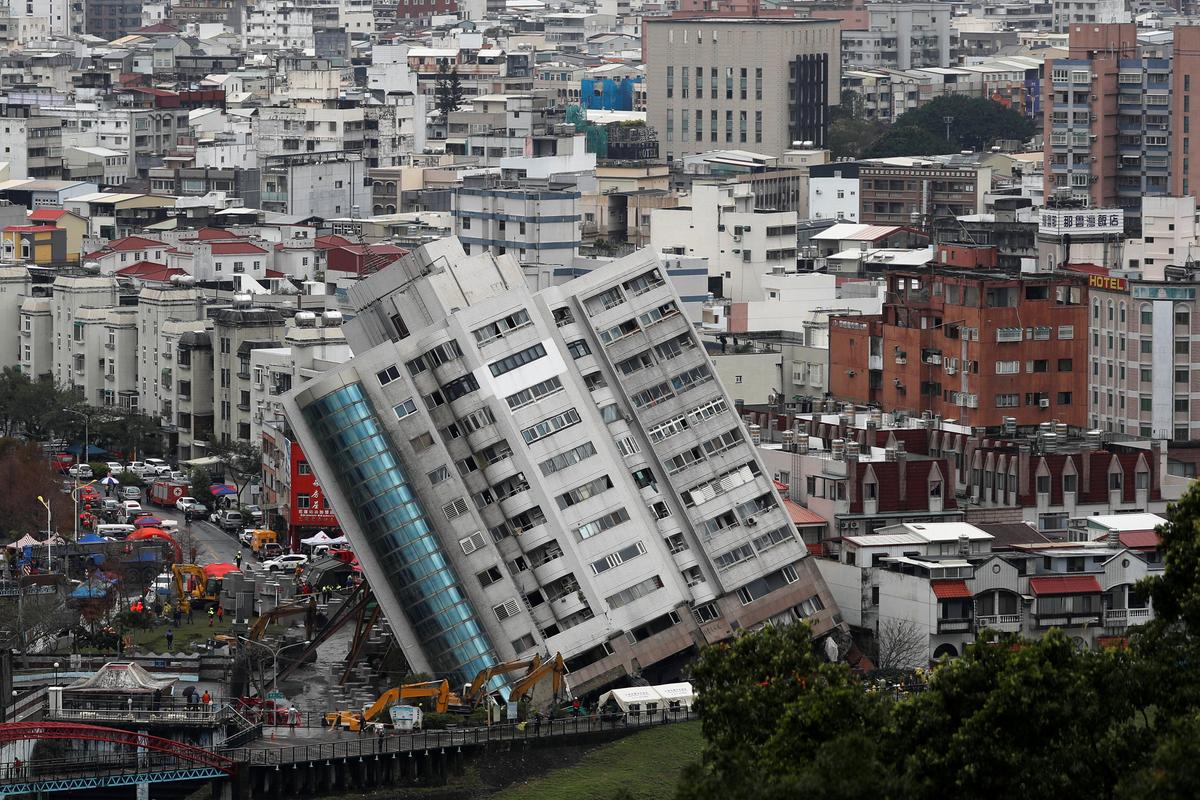 HUALIEN, Taiwan (Reuters) – Scores of aftershocks hampered rescue efforts on Thursday as emergency personnel combed through collapsed buildings in search of survivors after a powerful earthquake killed at least 10 people near Taiwan’s tourist city of Hualien.

The coastal city was hit on Tuesday by a magnitude 6.4 quake just before midnight (11.00 a.m ET) that injured 270 people. Four buildings collapsed, officials said, and seven people were still missing.

Rescuers stepped up efforts at one of the worst-hit structures, a 12-storey building that housed apartments and a small hotel, where authorities believe most of those still missing to have been, including several foreigners.

Thick steel girders propped up the heavily leaning structure to keep it from collapsing further, with the lower floors having already caved in.

“Everyone was surprised,” said Huang Chang Po, the 58-year-old owner of a unit in the building, built in 1994.

“We have strong earthquakes all the time in Hualien and it’s really bizarre that our building collapsed,” he told Reuters.

Up to 100 soldiers, rescuers, police, aid workers and volunteers scrambled in the cold and rain outside to find survivors, as excavators cleared away debris.

At an emergency meeting on Thursday, other residents and owners raised concerns about possible recent modifications and demanded a structural check by engineers to determine the cause of the collapse.

It was too early to ascertain the cause, however, said Chang Cheng Chen, an engineer from a regional architects’ association.

“It requires a thorough technical inspection, which may take two to three months,” he said, adding that factors such as the nature of the soil and how quake waves passed through the building could have played a part.

More than 220 aftershocks followed the main quake, including a 5.7 quake late on Wednesday. A Reuters witness said people rushed out of a residential building and rescue workers looked up from piles of debris after one such quiver.

Authorities “would not give up” on disaster relief efforts, Taiwan’s President Tsai Ing-wen said during her second visit to the quake-hit area on Thursday.

“I didn’t really dare stay at home,” said Hualien resident Yang Yantin. “The area around my house is actually not that bad, the houses are all OK but, because of the aftershocks, I don’t really want to stay there.”

“We have not seen a sign of a slowdown yet,” he told Reuters by telephone. “We need to continue to monitor the situation for one to two days…this is quite a rare event.”

As many as 150 people were initially feared missing in the rubble.

More than 600 soldiers and 1,300 police spread out to help the rescue effort, along with a team from Japan. The government said three mainland Chinese were among the dead.

Chen Deming, president of China’s Association for Relations Across the Taiwan Strait, said the mainland was willing to help with relief efforts, such as sending teams to the island. Taiwan authorities declined, however.

More than 800 people sought refuge in shelters overnight, many too scared to stay home as aftershocks fueled panic.

Hualien, whose rugged Pacific coastline and picturesque Taroko Gorge National Park are a major tourist draw, is home to about 100,000 people. Its streets were buckled by the quake, leaving large cracks in major roads.

“But later when all the lights started smashing – the floor was covered in glass – that is when I realized it was serious.”

Taiwan, a self-ruled island that China considers its own, lies near the junction of two tectonic plates and is prone to earthquakes. An earthquake with a magnitude of 6.1struck nearby on Sunday.