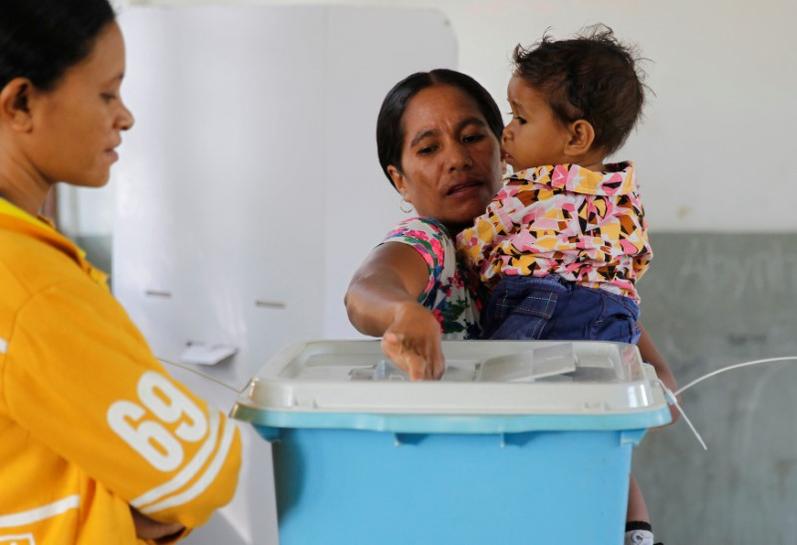 DILI (Reuters) – Voters in East Timor queued up on Saturday to cast their vote in the country’s fourth parliamentary elections since independence in a ballot where campaigning has focused on development and jobs in Asia’s youngest democracy.

More than 700,000 East Timorese are registered to vote in the country, which has a land area slightly smaller than Hawaii and is home to 1.2 million people.

Over 20 political parties are vying for 65 seats in parliament as frustration grows over the government’s failure to use the wealth generated by oil and gas sales to support development and create jobs.

The parliamentary election will determine the country’s prime minister. The official results of the election is expected to be announced by Aug. 6, although preliminary results should come much earlier.

“I hope the party that wins this election will build East Timor to be better than before,” said Maria Magdalena, 28, after casting her vote for the Revolutionary Front for an Independent East Timor, or Fretilin, one of the parties in a coalition backing the current government.

“I just want everything to run smoothly, peacefully and that there be no conflict in this country,” she added.

East Timorese picked former independence fighter Francisco “Lu Olo” Guterres to be its next president in a largely peaceful election in March.

Both the presidential and parliamentary elections are the first since the United Nations ended its peacekeeping operations at the end of 2012.

The former Portuguese colony was invaded by neighboring Indonesia in 1975. An often violent 24-year resistance movement took East Timor to independence in 2002 and many of its key figures still feature prominently in running the country.

Xanana Gusmao, another former independence fighter who was also East Timor’s first president after independence, and his National Congress for Timorese Reconstruction (CNRT) party are seen as the front-runners in Saturday’s vote. CNRT is also part of the current governing coalition.

“After a tiring month, I believe that we will win. If we win, we will do our best to save the nation and this country,” he told reporters before casting his vote.

If his party wins, Gusmao said it would continue development focusing on agriculture and tourism as well as oil and gas.

Analysts said the challenge for any incoming government would be to wean the predominantly Roman Catholic nation away from its reliance on oil money and diversify its income sources into agriculture and manufacturing.

The energy sector accounted for around 60 percent of GDP in 2014 and more than 90 percent of government revenue.