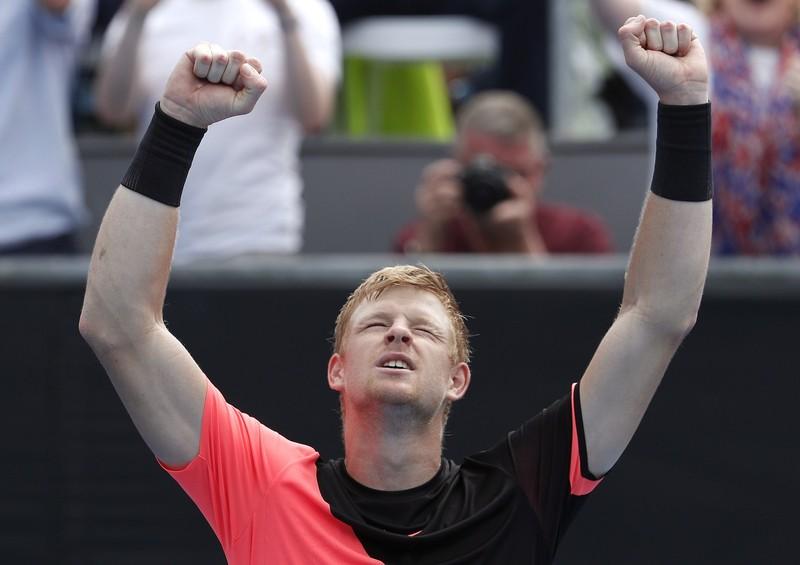 MELBOURNE (Reuters) – Britain’s Kyle Edmund outfought Kevin Anderson in a court three marathon to send the 11th seed tumbling out of the Australian Open 6-7(4) 6-3 3-6 6-3 6-4 in the first round on Monday.

Flying the Union Flag alone in the men’s draw in the absence of injured compatriot Andy Murray, Edmund conjured up the best result of his career the hard way.

The world number 49 twice needed to come from a set down to force a deciding fifth set, where again he battled back from a break down to clinch victory and set up a second round clash with Uzbek Denis Istomin.

“Really happy,” said the 23-year-old Edmund, who was born in South Africa but moved to England at the age of three.

”So many positive reasons. Just getting through a tough match like that (against) a quality player .. going down a set, coming back.

“Overall, there’s a personal satisfaction, the hours you put in, training, et cetera, so many things like that. Those type of results make … worth it basically.”

Big-serving Anderson sent down his usual barrage of aces, 35 in all, and showed no shortage of fight himself but was ultimately undone as Edmund fired back winner after winner.

Anderson, a finalist at the U.S. Open last year, had looked like he would ultimately pull away from his opponent until the last few games of the decider.

He won the tie break with his 23rd winner of the first set and even when Edmund squared up the match in the second he was putting enough consistent pressure on his opponent’s serve to feel confident of getting the breaks.

Light rain stopped play at a crucial moment in the third set after Edmund had saved three break points to battle back for deuce. He was left cursing his slow start after the action resumed and Anderson broke for 5-3 then served out the set.

”But I just knew that it’s tennis. It’s going to be up and down. I knew I would get the opportunity to break him. Just

deal with it when it happens and move on.”

The Englishman simply refused to buckle and again battled back to even up the set count, only to be broken in his opening service game of the decider.

Edmund broke back immediately, however, and although he needed treatment on his right shoulder, grabbed another and was soon sealing his victory with a thunderous forehand winner.

Reporting by Nick Mulvenney in Sydney, editing by Peter Rutherford