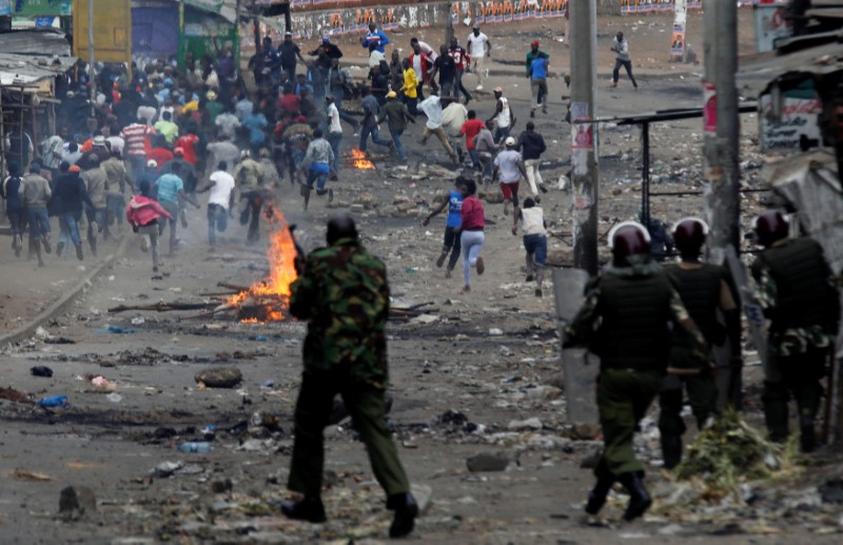 NAIROBI/KISUMU, Kenya (Reuters) – Kenyan police killed at least 11 people in a crackdown on protests as anger at the re-election of President Uhuru Kenyatta erupted in the western city of Kisumu and slums surrounding the capital, officials and witnesses said on Saturday.

The bodies of nine young men shot dead overnight in Nairobi’s Mathare slum were brought to the city morgue, a security official told Reuters, adding that the men had been killed during a police anti-looting operation.

Separately, a young girl in Mathare was killed by police firing “sporadic shots”, a witness said. The run-down neighborhood is loyal to 72-year-old opposition leader Raila Odinga, whose party rejected Tuesday’s vote as a “charade”.

A Reuters reporter in Kisumu, center of post-election ethnic violence a decade ago in which 1,200 people died nationwide, said tear gas and live rounds were fired. A government official said one man had been killed in the county.

The unrest erupted moments after Kenya’s election commission announced late on Friday that Kenyatta, 55, had secured a second five-year term in office, despite opposition allegations that the tally was a fraud.

Interior Minister Fred Matiang’i said the trouble was localized and blamed it on “criminal elements” rather than legitimate political protest.

Odinga’s NASA coalition provided no evidence for its rejection of the result, and Kenya’s main monitoring group, ELOG, said on Saturday that its tally matched the official outcome.

In addition to the deaths, officials at Kisumu’s main hospital said they had treated 26 people since Friday night, including four people with gunshot wounds and others who had been beaten by police.

DRAGGED OUT AND BEATEN

One man, 28-year-old Moses Oduor, was inside his home in the impoverished district of Obunga when police conducting house-to-house raids dragged him out of his bedroom and beat him with clubs.

“He was not out fighting them. He was rescued by my sister who lives next to him,” said his brother, Charles Ochieng. “She came outside screaming at the police, asking why they are beating people.”

More shooting was heard outside the hospital on Saturday morning. In Nairobi, armed police backed by water cannon moved through the rubble-strewn streets of Kibera, another pro-Odinga slum.

As with previous votes in 2007 and 2013, this year’s elections have exposed the underlying ethnic tensions in the nation of 45 million people, the economic engine of East Africa and the region’s main trading hub.

In particular, Odinga’s Luo tribe, who hail from the west, hoped an Odinga presidency would break the Kikuyu and Kalenjin dominance of central government since independence in 1963. Kenyatta, the son of Kenya’s first president, is a Kikuyu.

In Kibera, a convoy of pick-up trucks driving senior NASA officials into the slum was turned back by volleys of live police fire and tear gas, a Reuters witness said. It was not clear why the officials were going to Kibera.

Odinga loyalists fleeing from security forces in Kibera vowed to vent their rage at the seat of Kenyatta’s administration in central Nairobi.

“This is just a warm-up. Tomorrow we will go to State House and they can kill us there,” shouted Felix Oduor, 18, as he ran from clouds of tear gas along Kibera’s railway line. “They can’t kill us all,” those around him shouted in response.

“Let us be honest – there are no demonstrations happening,” he told reporters.

“Individuals or gangs that are looting shops, that want to endanger lives, that are breaking into people’s businesses – those are not demonstrators. They are criminals, and we expect police to deal with criminals how criminals should be dealt with.”

Even before the declaration, Odinga’s NASA coalition had rejected the outcome, saying the election commission’s systems had been hacked, the count was irregular and foreign observers who endorsed the poll and the count were biased.

NASA provided no evidence for any of its accusations but singled out former U.S. secretary of state John Kerry and former South African president Thabo Mbeki – who both led teams of election observers – for criticism.

Top Odinga lieutenant James Orengo said NASA would not challenge the results in court – as Odinga did when he lost in 2013 – but hinted at mass action by praising the history of Kenyans in standing up to previous “stolen” elections.

“Going to court is not an option. We have been there before,” Orengo told reporters.

In addition to the thumbs-up from foreign monitors, Kenya’s ELOG domestic observation group, which had 8,300 agents on the ground, published a parallel vote tally on Saturday that conformed with the official results.

ELOG’s projected outcome put Kenyatta on 54 percent with a 1.9 percent error margin – compared to an official tally of 54.3 percent.

“We did not find anything deliberately manipulated,” ELOG chairwoman Regina Opondo said.