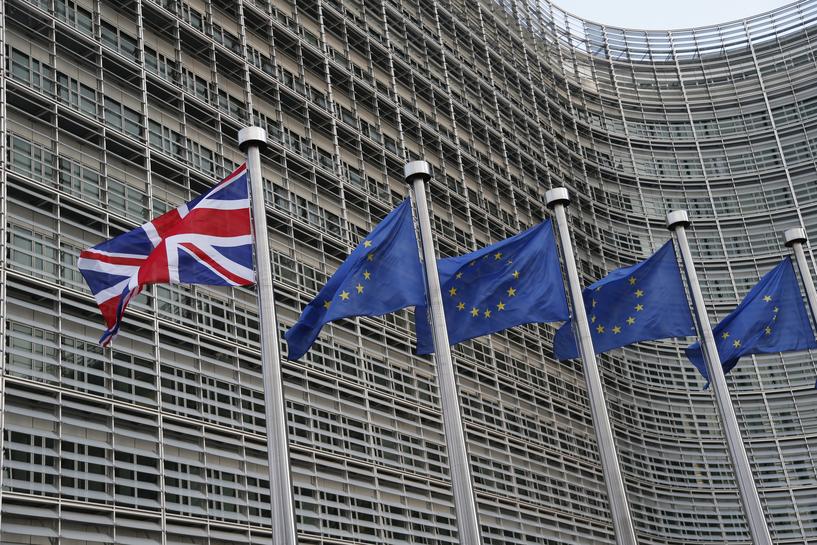 BRUSSELS (Reuters) – European Union nations except Britain began preparing on Wednesday for a transition period in relations with London and for their future ties after Brexit, with meetings over the next month aimed at drawing up guidelines for EU leaders in December.

A Union Jack flag flutters next to European Union flags ahead of a visit of Britain’s Prime Minister Theresa May and Britain’s Secretary of State for Exiting the European Union David Davis at the European Commission headquarters in Brussels, Belgium October 16, 2017. REUTERS/Francois Lenoir – UP1EDAG1BSC0F

Brussels envoys from the 27 EU states that will remain in the bloc after Britain exits on March 29, 2019, met for the first time since EU leaders last week decided not enough progress had been made in talks on the terms of the divorce with Britain to start discussions about future relations yet.

To encourage stronger efforts, EU leaders said they would start preparing now for talks on a transition period so they are ready if enough progress is made by the next summit in December.

“The process will start now, in the sense that we will meet successively… over the coming month,” one EU official involved in the talks said, adding there was likely to be discussion on the subject also during a ministerial meeting on Nov 20.

“We will prepare our thinking on the transition, the future relationship, and the possible additional guidelines for the December European Council,” the official said.

The outcome of the work would likely be presented in the December summit conclusions if leaders decide that enough progress was made on the divorce terms, officials said.

Britain wants an outline agreement with the European Union in place by the end of March 2018 on the transitional arrangements that will apply temporarily after it leaves the bloc, Brexit minister David Davis said on Wednesday.

EU officials said that was a very tough goal, but one that could be achieved if London showed enough willingness.

“It’s not so much if we can do it by the first quarter, but if we can get the UK to engage in a way that makes that possible,” the official said.

Both sides expect a transition period of around two years. The EU’s chief negotiator, Michel Barnier, on Tuesday said that would mean preserving the status quo as Britain would stay subject to EU laws and courts during that time.

In an interview with Belgium’s L‘Echo newspaper, Barnier said the only difference between full EU membership now and the transition period would be that “the British would no longer take part in decisions on European legislation”.

EU officials said the extra two years of transition would buy time for talks about a future free trade agreement, but poured cold water on the idea of extending the exit negotiations beyond that period with a view to keeping Britain within the EU.

“I don’t think anyone foresees an extension of the existing negotiation period,” the EU official said.

“We’ve already danced around with the UK for so long. First with Cameron. Then their referendum. Now this. It needs to end at some point,” the official said.

Businesses in Britain and in Europe are very concerned by the slow progress in Brexit talks. Not knowing what the future trade agreement between Britain and its biggest trading partner, the EU, will be, some have already started moving staff and operations out of Britain to hedge their bets.

More could follow should no more clarity be given by the two negotiating sides by the end of the year.

Barnier said that Britain could not count on a bespoke trade deal after Brexit and that since it has ruled out following the example of Norway’s relations with the EU it would probably have to model its ties on an arrangement the EU has with Canada.

Non-EU Norway currently pays for access to the bloc’s single market of 500 million people, though it is not part of the same customs union. In exchange, it is also obliged to allow the free movement of people in and out of the EU.

Britain wants to leave both the EU’s internal market and the customs union, meaning a “Canada +” scenario is more likely.

The European bloc’s trade deal with Canada, its most ambitious arrangement yet, has just taken effect. Under the deal Canada can still pursue its own bilateral trade agreements elsewhere in the world.