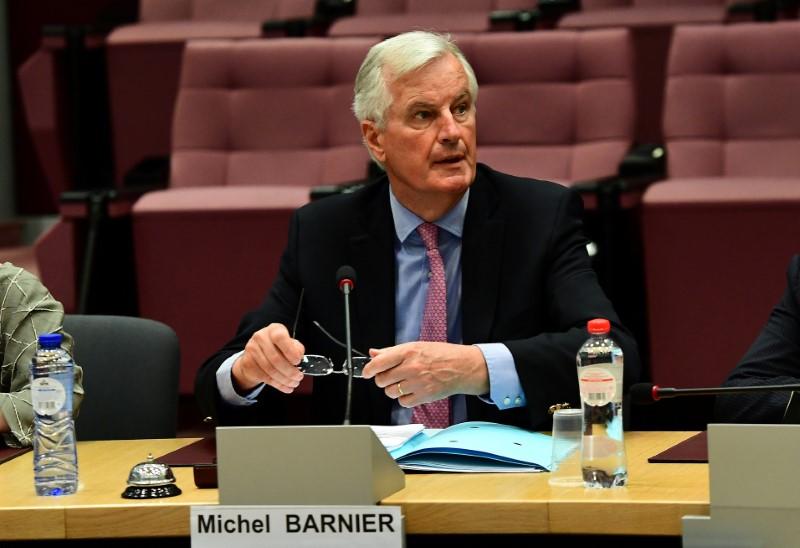 BRUSSELS (Reuters) – European Union negotiators see no room for discussion with Britain on maintaining “passport” access to EU financial markets for its banks after Brexit, but they are willing to look at free trade in the sector, diplomats said.

Speaking after EU officials briefed representatives of the other 27 member states on Tuesday, several diplomats who were present told Reuters there appeared to be some differences among governments over how much access to EU customers they were willing to give banks and other financial firms from London.

But, one said, “On financial services, it is nowhere close to the access one gets as a member state or through the EEA (European Economic Area). There will be no passporting rights.”

Michel Barnier, the EU’s Brexit negotiator, has already made clear in public that Brussels will reject suggestions from the City of London that institutions maintain the “passports” that allow them to offer services across the 28-nation bloc.

He has, however, said that some British regulations could be treated as “equivalent” to the EU supervisory regime, giving some favourable access in some types of business.

That would mean banks in Britain, including the London subsidiaries of global players from the United States, Japan and elsewhere, losing the automatic right to offer the same services in any other EU country. However, they might offer specific products, where UK regulations were deemed “equivalent”.

Otherwise, banks may set up new EU subsidiaries, involving extra cost, including having to inject capital into those units.

British firms have been pushing to be granted a sweeping “equivalence” package, but EU officials and diplomats say that is not workable, mainly because of difficulties in agreeing a way to ensure that British rules do not diverge from the EU‘s.

Commission data showed the EU now has agreements with 38 countries on equivalence of regulation in certain areas of financial services, often narrow in scope.

For instance, the EU has equivalence agreements with Egypt and Russia, but only on the audit framework and transitory regime. With Argentina, it is just the legal and supervisory framework covering credit rating agencies.

But it has equivalence agreements in 22 areas of financial services with the United States and 20 with Japan. Those cover prudential requirements for credit institutions and investment firms, insurance and reinsurance or over-the-counter derivatives, central counterparties and trade repositories.

None of the 38 countries has equivalence agreements in all areas of EU financial services.

Nor are there equivalence agreements with any country on prospectus rules, the transparency of securities financing transactions, or on short selling and certain aspects of credit default swaps, among others, according to the Commission data.

The Tuesday meeting, part of a series of “seminars” by the EU executive team with national envoys as the EU prepares for talks on a post-Brexit relationship, indicated a broad consensus behind that view, several diplomats said.

Two sources in Brussels said the EU has proposed to resume Brexit negotiations from Monday but there has been no confirmation from London as yet.

Earlier this week Britain’s Brexit minister David Davis said the talks would restart next week. The sides are due to intensify the Brexit negotiations with fortnightly meetings.

As Britain was leaving the EU’s single market and rejecting its rules, including arbitration by EU courts, one EU diplomat said, “it’s clear that they will lose passporting rights as this is part of the internal market and our regulatory regime.”

“When they do that, the only other alternative is what we have in some of our FTAs,” the person added, referring to free trade agreements the EU has with other countries.

Barnier has said that free trade accords have in the past offered only limited access for financial service providers. He has said there was a willingness to look at the possibilities of equivalence.

Some envoys expressed caution about how far that could be done. Others were more open to closer cooperation.

“Equivalence” could only be granted “case by case” to certain types of activity, the diplomats were told.

“It will, at best, be much less, and only specifically justified per sector. That’s the rub,” one of them said. Some areas of business would not be able to get such a deal.

“The key message was that given the UK’s red lines,” another diplomat said, “a free trade agreement is the only possible cooperation scheme.”

Another participant at Tuesday’s meeting said: “The EU offering the equivalence option to the UK in financial services is the best option they can hope for… equivalence is a possibility, if the Brits can agree to not changing their legislation much.”

London has, however, been at odds with Brussels on banking rules as a member – it opposed, for example, moves to control executive pay and bonuses – and the government insists it will leave the oversight of the European Court of Justice. And so agreement that rules are in harmony may prove difficult.