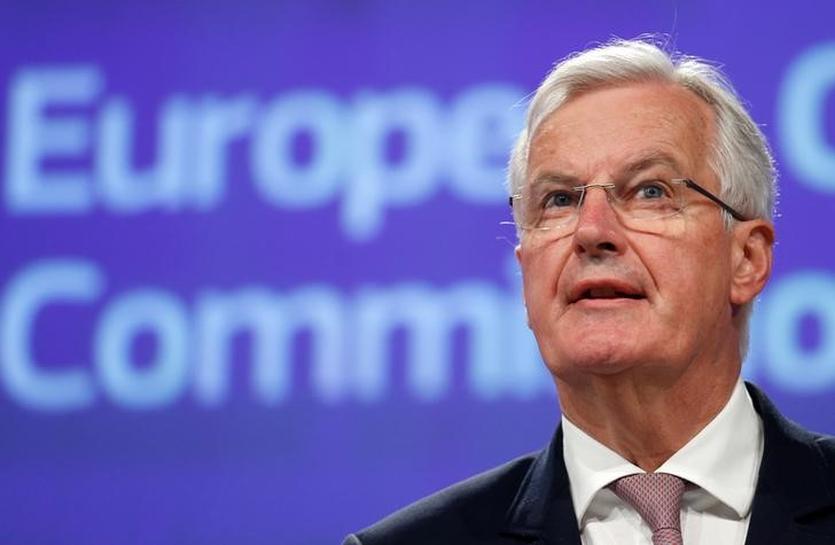 BRUSSELS (Reuters) – EU officials hope the British government shows more urgency about a Brexit deal when its negotiators come to Brussels on Monday for a first full round of talks aimed at smoothing Britain’s departure.

“The hard work starts now,” European Union chief negotiator Michel Barnier said on Wednesday, again sounding a note of alarm that London has yet to provide detailed proposals on a range of key issues, with barely a year left for bargaining.

A year after the referendum vote to leave, Prime Minister Theresa May still faces a complex task in finding consensus at home on what kind of Brexit Britain wants. That job was made all the harder by losing her parliamentary majority last month.

Their teams will spend most of the next four days in smaller working groups, trying to identify areas of accord and discord on a set of issues agreed on during an initial day of talks on June 19. On Thursday afternoon, Davis and Barnier should hold a news conference, to fix publicly what has been agreed so far.

The priorities, notably rights for expatriate citizens, how much Britain may owe to the EU budget and how to manage the new EU-UK border, especially with Ireland, are ones both sides want to settle in a withdrawal treaty. Barnier says this must be ready by about October next year if it is to be ratified on both sides of the Channel before Britain leaves in March 2019.

“The clock is ticking,” he said on Wednesday, displaying a degree of impatience with British ministers who continue to dismiss EU demands that they first must agree in principle that London will owe the Union a hefty amount — probably in the tens of billions of euros — to cover its existing commitments.

“The first serious test of the negotiations will be them agreeing to pay the bill,” a senior EU official said — the coming week is a vital moment to establish rapport among the senior civil servants who will handle what is arguably the most convoluted and far-reaching diplomatic deal of modern times.

Without “significant progress” on all three priorities in the divorce, Barnier warns, EU leaders will not let Davis open talks on a free trade relationship, which May and much of British business want to have ready by the time Britain leaves.

For now, the EU says May’s offer to guarantee the rights of 3 million Europeans in Britain falls short. It is also unhappy at Britain’s refusal to accept EU judges as ultimate arbiters of disputes — an issue that could get an early airing as London seeks a quick fix to prevent its withdrawal from the Euratom pact disrupting its nuclear industry and medical imaging.

EU leaders unanimously speak of rare harmony among them on how to deal with Britain so that Brexit does not unravel the EU further. Electoral setbacks for anti-EU parties and the arrival of the Europhile Emmanuel Macron as French president have lifted their mood. But British diplomats will try to exploit divergent interests among the 27, using Britain’s hefty economic clout.

A quarterly EU summit in mid-October could see leaders tell Barnier to prepare trade negotiations; but that will require good progress this week and in three further rounds of talks.

On that timetable, Barnier reckons, a broad political deal on the outlines of a new, open trading relationship could be in place by late next year, allowing for a transitional phase of up to a few years after Brexit to negotiate all the details.

Brussels has assumed for the past year that Britain needs a transitional period to avoid a “cliff edge” loss of EU access. But in a mark of the cross-Channel gulf in perceptions, many in London have questioned the need for a transition, during which Britain would have to follow EU rules and pay into the Brussels budget.

On Sunday, finance minister Philip Hammond, an advocate for a transition to Brexit, said most ministers now agreed with him: “Five weeks ago the idea of a transition period was quite a new concept. I think now you would find that pretty much everybody around the cabinet table accepts that there will be some kind of transition,” he said, saying it would be at least two years.