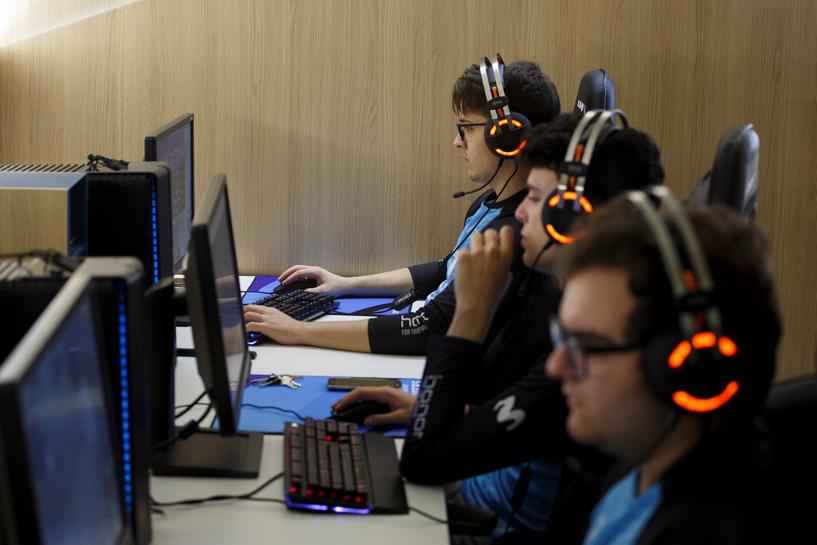 MADRID Marcos Ochoa has just landed the dream job for many young Europeans: he is being paid to play video games.

The 27-year-old Spaniard, whose internet nickname is “Aeroz”, is a rising star of the Esports, or video games competitions that are played online or even in sports arenas.

With championships watched by crowds of fans similar to traditional events like the NBA basketball finals or soccer World Cup, telecoms firms see Esports as a way to lure younger clients and brand themselves as digital companies rather than merely providers of phone services.

In April, Ochoa and four teammates signed a deal to become Vodafone’s official squad in Counter Strike, a game where the player can tackle terrorists trying to take hostages or carry out a bombing.

Vodafone, along with European rivals Telefonica and Orange, are investing in building up the industry by creating teams, TV channels or leagues.

With global revenues of $500 million in 2016, Esports remain financially tiny compared with the combined $450 billion income of the film, television series and sports industries in which those firms already compete for the best distribution rights.

Ochoa earns in a month what a top soccer player might make in an hour, and the telecom firms still need to build a business model able to bring in significant revenue from young people accustomed to consuming online products largely for free.

But according to data compiled by JP Morgan, the number of Esports fans is forecast to grow more than 50 percent by 2019 to 500 million people globally, generating revenues of $1 billion. Industry experts see a potential for a $10-20 billion market eventually.

“This year, an Esports event could get more audience than the Super Bowl and in a near future land more revenue for image rights,” Deloitte said in a report published last month.

Spain is a leading market in Europe, offering more of the fast fiber optic connections which video gamers and spectators demand than Britain, Germany and France combined as well as easy access to millions of players in Latin America.

Its Liga de Videojuegos Profesionales (LVP), or League of Professional Video Gamers with 60,000 daily viewers, is the world’s third-biggest after the United States and South Korea.

It was bought last year by Spanish sports rights firm Mediapro, which also owns the La Liga football rights, and is sponsored by Orange.

Telefonica, meanwhile, launched in January on its premium TV platform Movistar+, a 24 hour channel broadcasting the best competitions and has created its own team, Movistar Riders, which competes with Vodafone’s G2, in which Ochoa plays.

None of the three companies has disclosed how much they have spent so far in Esports but Ignacio Martinez, who oversees Vodafone’s Esports strategy in Spain, says it is the first time since he joined the industry 15 years ago that he sees telecoms companies rushing into a new market this way.

Martinez says his two squads which play Counter Strike and League of Legends, a game where players fight each other, receive support from fitness coaches, psychologists, physiotherapists, project managers and technical directors, like any professional football or basket ball team.

“It’s a natural place to be for a telco because without a good fiber or mobile connection, you cannot play or watch. We’re targeting a rising audience of digital natives who are extremely active on social media and influence their parents on which telecoms services they should buy,” Martinez said.

The return on an investment seen in the ball park of the tens of millions of euros is potentially huge – and quick.

According to the data from JP Morgan, an Esports viewer generates $3.3 in revenue compared with $44.1 on average for U.S. professional sports leagues such as NFL or NBA.

And at the current growth rate, Esports could reach in just 10 years monetization levels that took 50 years to achieve in traditional sports.

Yet, for many investors, Esports remains a wild west where different publishers, such as Activision, several event organizers, various platforms and dozens of different teams and leagues compete with almost no rules.

Spain’s LVP for instance showcases seven games, including hits League of Legends, warfare game Call of Duty and soccer game FIFA, but not Counter Strike, which belongs to the rival ESL league. Spain is also home to two additional leagues.

This fragmentation signals the problems ahead for telecom providers in persuading gamers to part with their money, such as with “micro-payments” – small sums for add-on features which at the moment go typically only to the games’ publishers.

“Revenue right now primarily comes from sponsorship but we’re moving into a new revenue generation model based on content and micro-payments,” said Ignacio Fernandez-Vega Feijoo, director of strategy for Movistar+.

The arrival of professional sports teams could accelerate this transition as they bring a bigger audience, know-how and money, especially to pay players.

Paris Saint-Germain, Manchester City, Valencia CF, Schalke 04 and AS Roma are among the soccer clubs which now have Esports teams. Next season, the U.S. basketball league NBA will also sponsor a digital league with 17 of its 30 teams.

Vodafone’s Ochoa, says he could have not taken the plunge to become a professional player just two years ago.

He currently earns close to 1,000 euros per month to be the “support” in his Counter Strike team, a back-up role for the player who shoots the enemies.

While a modest salary compared with traditional sports or even the top global stars of the Esports who last year made close to $2 million, it is in line with the average wage for a Spaniard of his age.

“Before, my family used to tell me ‘stop wasting your time playing games and do your homework’. But now, everybody wants to make money out of it,” Ochoa said.