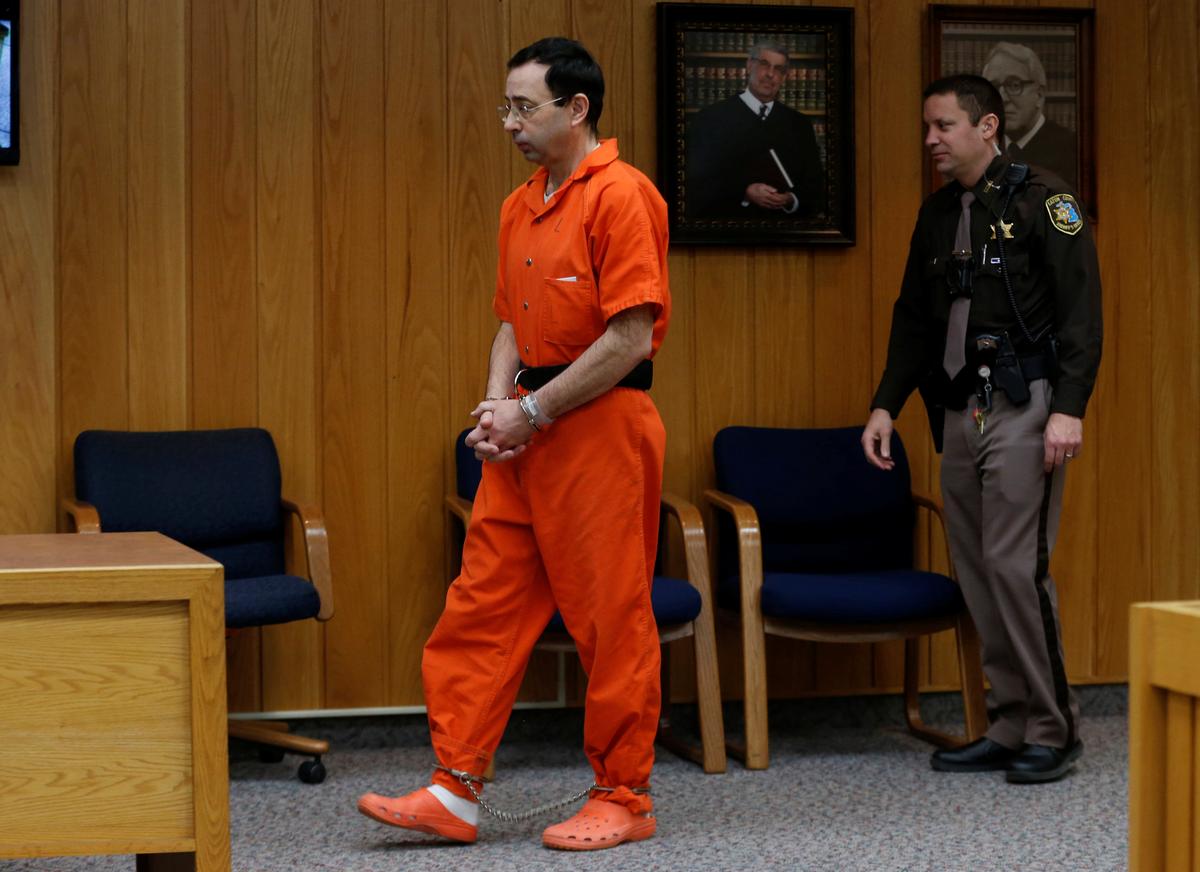 CHARLOTTE, Mich. (Reuters) – Former USA Gymnastics doctor Larry Nassar was sentenced to an additional 40 to 125 years in prison on Monday for molesting young female gymnasts, capping weeks of horrifying testimony from hundreds of victims who told of his decades of abuse.

Nassar, who previously received a 40-to-175-year sentence in Ingham County, Michigan, for sexual assault, was sentenced in neighboring Eaton County on Monday on a second set of abuse charges. He is also serving a 60-year federal term for child pornography convictions.

The doctor offered a brief apology to his victims on Monday, saying, “The visions of your testimonies will forever be present in my thoughts.”

But judge Janice Cunningham said Nassar had again suggested in a pre-sentencing interview with authorities that his conduct was legitimate medical treatment, even after he was sentenced in Ingham County.

“I am not convinced that you truly understand that what you did was wrong, and the devastating impact that you have had on the victims, their families and friends,” she told Nassar. “Clearly you are in denial. You don’t get it.”

As Cunningham delivered Nassar’s sentence on Monday, Rachael Denhollander, the first woman to make her allegations of abuse public in 2016, smiled broadly and squeezed her husband’s hand. After Nassar was led out in handcuffs, a parade of victims lined up to hug and thank Denhollander.

“I‘m just ready for it to be over,” Bailey Lorencen, who was abused by Nassar as a preteen gymnast, told Reuters. “It’s finally done.”

Athletes were drawn to Nassar for treatment due to his reputation as the go-to doctor for Olympic gymnasts. He disguised his digital penetration of victims as “intravaginal adjustment,” a legitimate treatment sometimes used to relieve pain.

As with last month’s proceeding in Ingham County, Monday’s sentencing followed days of testimony from Nassar’s victims who offered wrenching accounts of his abuse masquerading as treatment, sometimes with their own parents present in the exam room.

Friday’s hearing was briefly interrupted when Randall Margraves, whose three daughters were all Nassar victims, charged at Nassar in the courtroom and tried to attack him before being tackled by officers.

All told, the two sentencing hearings saw more than 200 victim impact statements, and prosecutors have said there are approximately 265 known victims in total. Many women chose to speak out after watching fellow survivors deliver their statements in court.

The scandal surrounding Nassar has reverberated far beyond the sports world, sparking various investigations into why the U.S. Olympic Committee, sport governing body USA Gymnastics, and Michigan State University, where he also worked, failed to investigate complaints about him going back years.

High-level officials at USA Gymnastics and Michigan State have been forced to resign in recent weeks as outrage over the case intensified.

Cunningham briefly took note of the institutional failures that permitted Nassar to continue molesting girls even after several victims told coaches, trainers, Michigan State and a local police department about his abuse.

“It is unfathomable how many victims would have been spared had authorities acted upon the complaints received years ago,” she said.

Many of the victims have filed lawsuits against USA Gymnastics and Michigan State, accusing them of ignoring complaints against Nassar. Denhollander harshly criticized the university, which has asked a judge to dismiss the litigation.

“They have put institutional protectionism ahead and above the souls of little children,” she said.

HDT Singapore to shut its taxi business due to COVID-19
More childcare centres appointed for new term of Partner Operator Scheme; fee caps to be lowered
Commentary: Moving to Singapore in the middle of a pandemic has changed the meaning of home
Kashmir people vote in local polls amid cold and security
Chinese Rights Activist Who Opposed Hong Kong Security Law ‘Tortured’