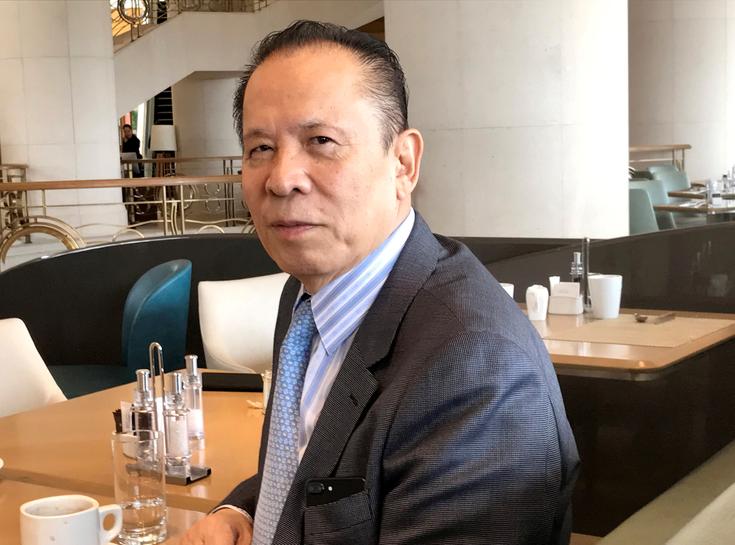 TOKYO Japanese casino and slot machine tycoon Kazuo Okada has filed a lawsuit against his son, daughter and wife in Hong Kong in an attempt to regain control of his sprawling business empire, according to a court filing and Okada.

Okada, 74, told Reuters in an interview that he saw a lawsuit as the only way to get his son and daughter to the negotiating table after they took control of the board of a Hong Kong company at the center of his business holdings in May.

Okada Holdings Ltd, the Hong Kong company that is majority owner of Tokyo-listed gambling machine maker Universal Entertainment Corp, is also a defendant in the suit, according to the Hong Kong High Court online database, though Okada himself didn’t confirm that. It was unclear on what grounds the suit was brought and no other details were available from the court.

Okada declined to respond to questions about the details of the suit, which Reuters was unable to view, but said he believed he had been wronged by the move to push him out as director of Okada Holdings, a change that was registered on May 12, according to a public filing.

Okada said he hasn’t seen his son Tomohiro in two years and does not know his daughter Hiromi’s current whereabouts. Reuters was unable to reach either of them at addresses in public records. Both are Okada’s children from a previous marriage.

Okada said he hoped a lawsuit would prompt a judge to order them to negotiate a settlement that would restore his position at Okada Holdings.

“Unless I sue there will be no opportunity to talk. The reality is I am in a losing position in terms of voting rights,” Okada said, referring to his 46.4 percent stake in Okada Holdings, versus Tomohiro and Hiromi’s combined 53 percent.

Okada said he did not find out he was dropped as Okada Holdings’ director until May 18. He said Universal’s board told him on May 23 that he was being investigated for alleged misuse of company funds. That was followed by Universal’s announcement on May 31 that he would not be reappointed to its board.

“I was totally blindsided,” Okada said.

The interview took place last Thursday in the restaurant of a Tokyo hotel where Universal was holding its annual shareholders’ meeting. Okada had been denied entry on the grounds he is not a direct shareholder since the Hong Kong holding firm holds his stake.

Universal declined to respond to Okada’s assertions. It said it would make additional disclosures once an internal investigation it recently launched to probe Okada’s alleged improper use of company funds had submitted its findings.

Okada said Tomohiro turned against him because his son believed he was not being paid dividends from Universal commensurate with his 43.5 percent stake in Okada Holdings. Okada said he planned to investigate the matter.

Okada said he was confident he could convince Hiromi to support him as long as he could get her brother to work towards a settlement.

As for his wife Takako, Okada said he could not forgive her for agreeing to be reappointed to Universal’s board. The company said Thursday that Takako would take on responsibility for Okada’s art museum and advise the company on its overseas business.

Takako, 43, did not respond to letters left at her home, an email sent to her company address, or a request to speak relayed through her mother.

Last month, Universal issued a press release accusing Okada and another director of misappropriating some $20 million in company funds in three transactions during 2015. It convened an investigative panel composed of three attorneys that is now looking for other alleged irregularities.

Okada described the company’s allegations as “nonsense”. For example, he said one of the transactions in question was a loan not due until November that had been used for a legitimate purpose: to expand junket operations aimed at attracting high-rollers to Universal’s casino in the Philippines.

“That contract is still active. There is no problem.” Okada said he could not provide a copy of the contract for Reuters to review because it was located at a company office to which he no longer has access.

Okada said he viewed the investigation as an attempt by Universal President Jun Fujimoto to seize control. Okada noted that he had handpicked Fujimoto to help lead the company founded five decades ago.

“I made Fujimoto president. Now he wants to take over.”

Fujimoto called Okada “unfit” to be the director of a public company and vowed to prove that with “irrefutable physical evidence” in a private letter to a shareholder on June 21, Reuters reported last week.

Universal declined to make Fujimoto available for comment. Universal said it was not in a position to comment about Okada’s allegations against Fujimoto. Two new directors at Okada Holdings did not respond to emails seeking comment.