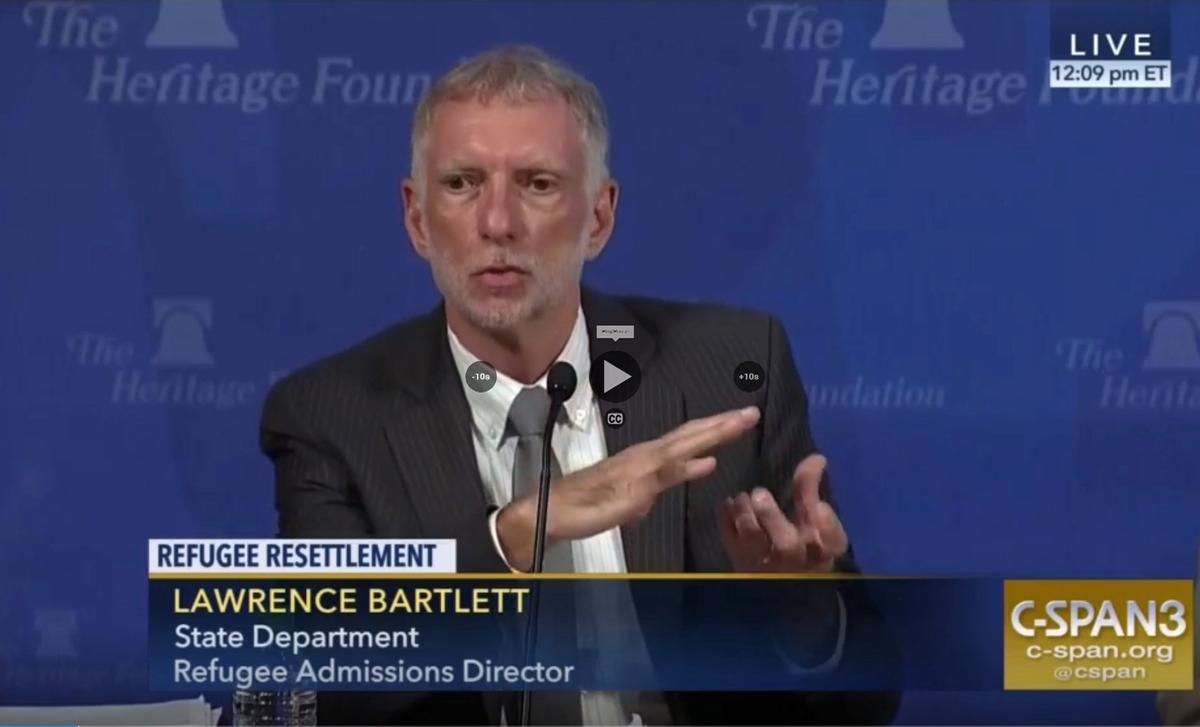 WASHINGTON (Reuters) – A U.S. official who has been a defender of refugees has been sidelined within the State Department in what some advocates and former officials fear is part of the Trump administration’s goal of limiting refugee resettlement in the United States.

Lawrence Bartlett, head of refugee admissions at the State Department’s Population, Refugees and Migration bureau, is now on a temporary assignment at another office, a State Department spokeswoman said.

Bartlett’s future leadership of the refugee office has been in doubt for months. He is now a temporary senior adviser at the State Department office that handles requests for information under the Freedom of Information Act (FOIA).

Sending a civil servant of his experience and rank to that office is unusual, according to current and former U.S. officials who spoke on condition of anonymity.

A current official described such a re-assignment as a form of internal exile like being sent “to Siberia.”

“The FOIA office was always the punch line of a joke around here, as in: ‘They’ll send me to the FOIA office,’” the official said.

Bartlett’s reassignment is the latest sign that the way the United States resettles refugees is being reshaped by the Trump administration, which is determined to restrict refugee admissions, advocates said.

Since taking office last January, President Donald Trump has slashed the number of refugees allowed into the country, paused the refugee program entirely for four months, instituted stricter vetting requirements, and quit negotiations on a voluntary pact to deal with global migration.

A State Department spokeswoman declined to comment on the reason for Bartlett’s new temporary assignment, but she said access to information, including FOIA requests, is “a high priority of the Department of State to promote transparency.”

She declined to say who will fill the position in his absence and whether he would eventually return to his refugee position.

It is too early to know what ultimate effect Bartlett’s re-assignment will have on the refugee program or on the State Department’s role in internal debates on its future.

Bartlett did not respond to a range of questions about his new role, but did say he has not been told the assignment is permanent.

“I can assure you that I have NOT been permanently reassigned from my position with the refugee program,” Bartlett wrote in an e-mail to Reuters.

Refugee advocates say Bartlett was a strong and effective advocate for the resettlement program inside the Trump administration.

Trump has said refugee resettlement is both costly and a threat to national security but advocates say refugees contribute positively to U.S. communities and are vetted rigorously.

In the first three months of this fiscal year, which began in October, the United States accepted about 5,300 refugees, the lowest number in the first quarter of any year since 2003, according to State Department data.

Refugee advocates say they worry Bartlett could be permanently replaced with someone with far less experience.

“We are of course extremely concerned, looking at what’s happened with other government departments, that he will be replaced by a political appointee who is just going to continue to destroy the program,” said Hans Van de Weerd, vice president of U.S. programs at the International Rescue Committee, a nonprofit which resettles refugees.

Supporters of the administration’s harder line on immigration said Bartlett’s reassignment should not be seen as unusual.

“No federal government employee is so uniquely qualified and so perfect for any job that they’re the only one who can do it,” said Jessica Vaughan, of the Center for Immigration Studies, which favors stricter limits on immigration.

Bartlett’s role as director of the admissions office entailed engaging with the major non-profit agencies responsible for receiving refugees admitted into the United States.

Since approximately November, Bartlett has not been included on communications between the State Department and outside refugee agencies that he normally would have been, one person involved in refugee resettlement said. Bartlett was serving as director of the refugee admissions office as of late October, according to a State Department document seen by Reuters.

Bartlett returned in mid-December from Puerto Rico, where he had been sent late last year to assist the federal response to a hurricane.