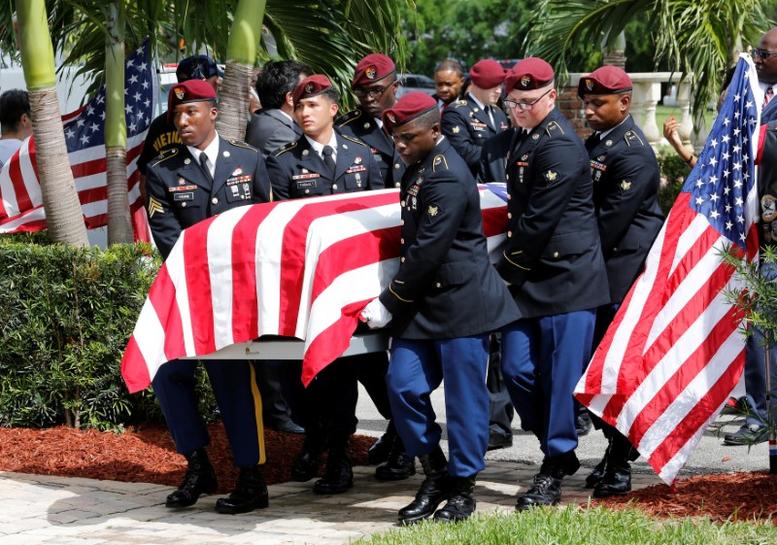 WASHINGTON (Reuters) – Democratic U.S. lawmakers called on Thursday for public hearings on an attack in Niger that killed four U.S. soldiers, saying there were still many unanswered questions about the ambush despite receiving more information from the Pentagon.

An honor guard carries the coffin of U.S. Army Sergeant La David Johnson, who was among four special forces soldiers killed in Niger, at a graveside service in Hollywood, Florida, October 21, 2017. REUTERS/Joe Skipper

Senator John McCain, the Republican chairman of the committee, said he was pleased with the briefing. McCain last week threatened to issue a subpoena because the White House had not been forthcoming about details about the attack.

“I am pleased at the cooperation we’re getting now,” McCain told reporters.

McCain said there were still many unanswered questions, most notably why it took 48 hours before the body of Sargent La David Johnson was recovered. “What was the strategy; why were we surprised? There’s 100 questions that need to be answered,” McCain said.

The issue has also generated a political firestorm. President Donald Trump was harshly criticized for his handling of a call with Myeshia Johnson, Johnson’s widow, who said the Republican president “made me cry even worse” by saying her husband had known “what he signed up for.”

Senator Richard Blumenthal, a Democratic committee member, said he wanted public hearings on the matter to explain to the U.S. public why the country has 6,000 troops posted in Africa and provide more information about the ambush.

“I need to be able to look families in the eye and explain what our mission is, what mistakes were made in this incident, and were mistakes made, who made them and why,” Blumenthal told reporters after the briefing.

“Most important, there need to be public hearings,” he said.

McCain said he would decide whether to hold public hearings depending on what happened with the military’s investigation, citing security concerns about making anything public too soon.

“We can’t betray sensitive information that would put the lives of these men and women in danger,” McCain said.

On Monday, General Joseph Dunford, the chairman of the military’s Joint Chiefs of Staff, held an hour-long news conference during which he sought to tamp down criticism that the Pentagon had released too little information about the deaths of the soldiers. [L2N1MY1MD]