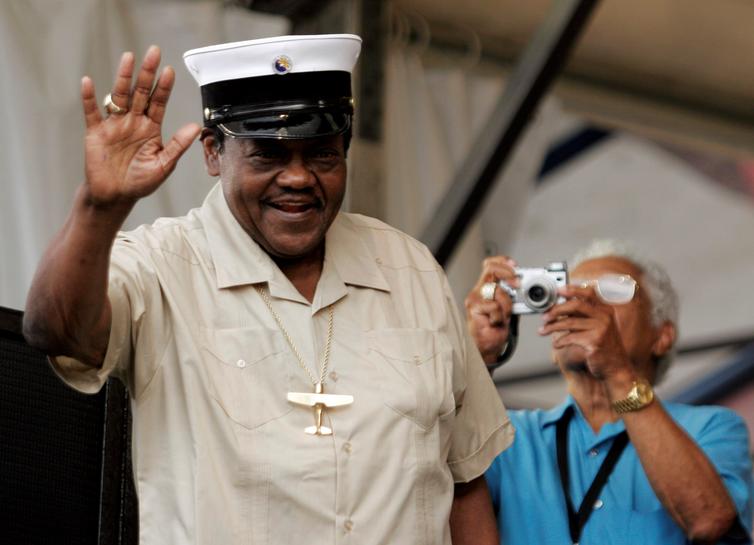 (Reuters) – Fats Domino, who brought rolling New Orleans boogie-woogie piano to early rock ‘n’ roll in chart-topping hits such as “Blueberry Hill” and “Ain’t That a Shame,” has died at the age of 89, officials said on Wednesday.

Domino, who for a while was mistakenly thought to have been killed when Hurricane Katrina devastated his New Orleans neighborhood in 2005, died at home on Tuesday of natural causes, the Jefferson Parish Coroner’s Office said.

As one of the pioneers of rock ‘n’ roll in the 1950s, Domino sold 65 million records – more than anyone in that period except Elvis Presley, according to the Rock and Roll Hall of Fame.

He had dozens of songs on the pop and rhythm-and-blues charts, including “Blueberry Hill,” “Ain’t That a Shame,” “Blue Monday,” “I‘m Walkin’,” “Whole Lotta Loving,” “Hello, Josephine,” “Walking to New Orleans,” “I‘m Gonna Be a Wheel Some Day” and “Let the Four Winds Blow.”

“For lack of a better way of putting it, he’s a living, walking legend among us in New Orleans,” singer Irma Thomas told the New York Times in 2007. “Between him and Louis Armstrong, they were the first big names to put us on the musical map.”

Antoine Dominique Domino was born on Feb. 26, 1928 in New Orleans and one of nine children. A brother-in-law taught him piano, leading to a style that mixed the classic New Orleans sound with blues, country and Cajun music. He was performing in nightclubs while still a teenager and soon teamed with trumpet player Dave Bartholomew, who would become his co-writer and producer and help refine his piano style.

His nickname was attributed to his short, squatty stature, as well as a tribute to two other pianists – Fats Waller and New Orleans native Fats Pichon.

Like contemporaries Little Richard and Chuck Berry, Domino was a black performer whose music crossed over to white audiences and helped shape early rock.

His first hit was an R&B song, the autobiographical “The Fat Man,” recorded in 1949 and considered among the first songs in the rock ‘n’ roll genre.

Also like Little Richard, one of his biggest hits, “Ain’t That a Shame,” was later recorded by Pat Boone, a white singer, whose version received more radio airplay. A live version of the song by the rock band Cheap Trick was a hit in 1978.

Domino would be a huge influence on rockers who came after him – John Lennon told a New York radio station that “Ain’t That a Shame” was the first song he learned to play – but his prominence began to wane after the British invasion and other forms of rock took root in the 1960s.

Harry Connick Jr., from a later generation of New Orleans musicians, said on Twitter, “You helped pave the way for New Orleans piano players… see you on top of that blueberry hill in the sky.” Guitarist Vernon Reid of the band Living Color mourned Domino’s death by tweeting, “Rock & Roll lost part of it’s soul.”

In his later years Domino was reluctant to perform and rarely left his beloved hometown, but he did go to Indianola, Mississippi, in 2015 to play “Amazing Grace” at B.B. King’s funeral.

Domino was a longtime resident of New Orleans’ Ninth Ward – the section of the city hit hardest by Katrina’s floodwaters – and had resisted early pleas to evacuate as the hurricane approached. For a time he was believed to have died in the flooding and the words “R.I.P. Fats You will be missed” were spray-painted on his house, which was flooded up to the roof.

It was later learned that Domino and his family had been rescued by boat and taken to the refugee center set up at the Superdome in the city before going to Baton Rouge. They lost most of their possessions in the flood but managed to save Domino’s couch, which was custom-made from the rear end of a vintage pink Cadillac.

After Katrina, he moved to a New Orleans suburb to live with his daughter.

The Recording Industry of America late gave Domino reproductions to replace the 20 gold record awards he lost. His Grammy Awards also were replaced and President George W. Bush visited Domino to give him a new National Medal of the Arts.

Domino titled his 2006 album “Alive and Kickin’” and proceeds went to help rebuild New Orleans and preserve its musical heritage.

Domino was among the inaugural class of artists inducted into the Rock and Roll Hall of Fame in 1986.