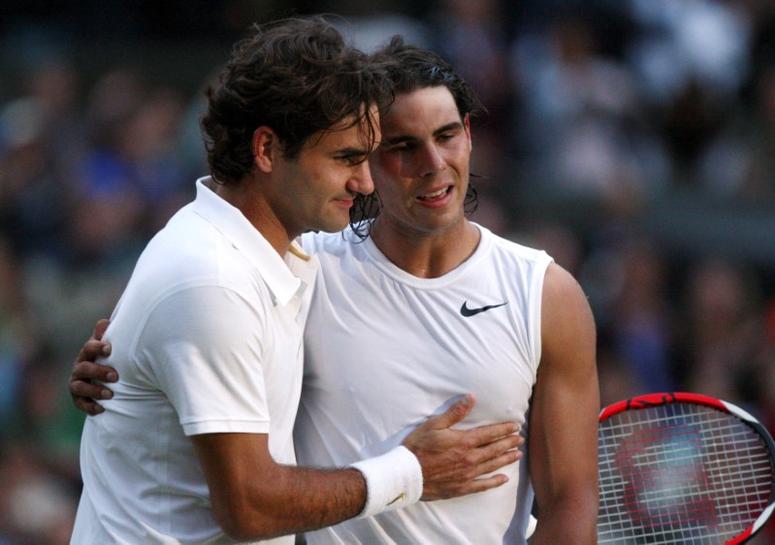 LONDON Roger Federer and Rafael Nadal have shared the grand slam spoils this year and it would take a hard heart not to hope for a fairytale rematch next month of their epic 2008 Wimbledon final.

Federer, 35, prevailed in their five-set battle in Australia to win a record-extending 18th slam, but sat out the claycourt season in which Nadal, 31, made his own history by winning a 10th French Open title — ‘La Decima’ — and 15th slam.

The match, at four hours and 48 minutes, is still the longest final in Wimbledon history. It was hailed by pundits, players and fans alike, with seven-time grand slam champion John McEnroe describing it as the greatest match he’d ever seen.

The Wimbledon seedings, to be confirmed on Wednesday, and Friday’s draw will determine whether the titans could meet on Centre Court in the final of the tournament, which runs from July 3 to 16, for the first time since that tussle.

But for those who believe in omens, Nadal, then all pirate swagger with his long shorts, long hair and sleeveless shirts, won the 2008 Wimbledon title after annexing the French Open without dropping a set — a feat he repeated earlier in June.

Nadal, the world number two, pulled out of the traditional grasscourt warm-up tournament, the Aegon Championships at London’s Queen’s Club, to rest up for his challenge for a third Wimbledon title while preparing in his native Mallorca.

He missed Wimbledon last year with a wrist injury and since he lost to Novak Djokovic in the 2011 final, Nadal has had an underwhelming run, with each of his four subsequent visits ending in defeat to a player ranked 100 or lower.

Yet Nadal gave notice of his intent after winning in Paris.

“I’m motivated. Grass is not my specialty, but I’m very motivated,” he told reporters.

For his part, Federer, whose 2016 season came to an abrupt end after he lost in the Wimbledon semi-finals to runner-up Milos Raonic, made a sensational start to the year.

He prevailed in the 35th chapter of his rivalry with Nadal in January to clinch the Australian Open — his first grand slam title since Wimbledon in 2012 — before again trumping the Spaniard en route to claiming the Indian Wells and Miami titles.

That run defied logic as Federer had spent the last six months of 2016 on the sidelines recuperating from a knee injury that had required surgery earlier in the season.

He then gave the unforgiving Roland Garros courts a miss to focus on Wimbledon and the hardcourt swing.

While the grasscourt comeback for the seven-times Wimbledon champion faltered in the first round at Stuttgart, losing to German veteran Tommy Haas, Federer was imperious on Sunday as he won a ninth Halle title without dropping a set all week.

“I was doubting myself a little bit, I must admit, because losing (in the opening) round for the first time in 15 years on grass was always going to shake me a little bit and it did,” Federer told the ATP men’s tour website.

“So I’m happy to react right away and let that be forgotten and actually move on and remind myself I actually can play well on grass.”

And if Federer also needs a talisman from the statistics books as he heads to London, how about the fact that in the years that he won his first four finals — 2004, 2005 and 2012 — he also went on to win Wimbledon?