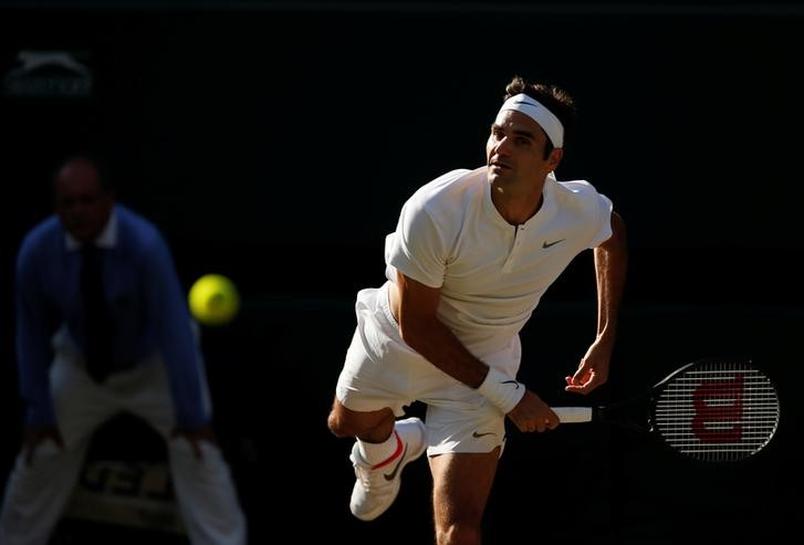 LONDON (Reuters) – While 14,999 spectators were left wonderstruck as they watched Roger Federer reach the Wimbledon final a month short of his 36th birthday, there was one man on Centre Court who could have shouted out “been there, done that, got the t-shirt”.

Anyone even remotely acquainted with Ken Rosewall, however, knows that simply isn’t the style of one of the great gentlemen of the game.

Instead, the 82-year-old Australian was as awestruck as anybody on Friday as he sat with his grandson in the royal box watching Federer beat Tomas Berdych to become the oldest men’s singles finallist here since Rosewall in 1974.

“I’m like millions of others. I admire Roger so much,” Rosewall told Reuters in an interview.

“I think he’s going to be a force in tennis for a few more years.”

As Federer continues to defy the ravages of age with his remarkable run this year – winning an 18th major title in Melbourne in January and now on the cusp of a record eighth Wimbledon title – the comparisons with Rosewall are inevitable.

“I’d like to be compared to Roger,” Rosewall said with a laugh.

“I was playing some of my best tennis at 35. Roger’s doing the same thing. I don’t see any reason why he shouldn’t continue for at least another two or three years.”

Federer still has some way to go if he is to match the longevity of Rosewall’s incredible career as the Australian was 39 when he lost the 1974 final to brash youngster Jimmy Connors.

Despite that letdown, Rosewall has retained the title of the oldest men’s grand slam champion in the professional era for 45 years after lifting the 1972 Australian Open trophy at the age of 37.

“If anyone is to break it, I won’t be sorry to see the record go to somebody like Roger,” added Rosewall, who was in London to celebrate the 50th anniversary of the 1967 Wimbledon Pro event.

Rosewall won four of his eight grand slam titles after turning 30 and makes no bones about why he kept leading such a nomadic life for so long.

“I was 33 when Open tennis came in … I was still enjoying the tennis and I was playing well,” said Rosewall

“I still felt I was a strong force in winning events… and the chance to play for prize money, that was the main motivation.”

Money, which Rosewall now keeps neatly folded in a 14 carat gold paper clip he was awarded for winning the 1969 U.S. Open doubles title, played a significant role in his tennis career.

Unlike the champions of today who are used to banking seven-figure sums in prize money from the slams, Rosewall started off in the 1950s when he played for kudos and little else.

Tennis Australia would pay his on-road expenses and a per diem but there was no money for winning grand slams, merely “big bronze stumps” of trophies that would end up “being used as door stoppers”.

All that changed when Rosewall beat his great friend Rod Laver to triumph at the French Open in 1968, the first time a grand slam had opened its gates to professionals.

While it meant that Rosewall could compete in the majors again without worrying about financial security, his long absence from the grand slams after he turned professional in 1957 raises a question that can never be answered.

“I believe I could have won another 10 more slams. But who knows? It’s too hard to tell,” said Rosewall.

“I developed my game so that I could play well on any surface. And in those days three of the grand slam events were on grass. In Sydney, where I grew up, I learnt to play on claycourts.

Rosewall, who is left-handed but switched to playing right-handed at his father’s behest, cut his opponents down to size by “swinging away the backhand shots” despite being only 5 feet 7 inches tall.

Nicknamed “Muscles” because of his lack of them, Rosewall sometimes wishes he could have faced some of the greats of the modern era and would have “loved to have tried my chances against Roger”.

There is one aspect of playing in the 1950s that he would never swap, however.

“In the amateurs there was a lot of camaraderie with the players,” said Rosewall, who was part of tight-knit group that included Laver, Fred Stolle and the late Lew Hoad.

“People would ask ‘how can you be so competitive in the matches because you spend so much time together?’.

“But that’s the way we were. Even with so many years gone, we’re still friends.”