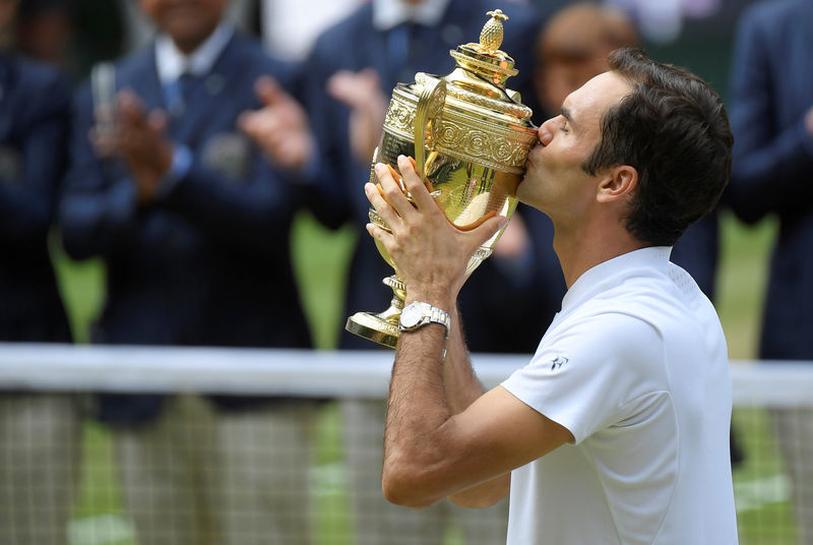 The incomparable Swiss turned his 11th Wimbledon final into a procession as tearful seventh seed Cilic, battling his nerves and a bloody blister, suffered a torrid afternoon.

Federer described Cilic’s predicament as “cruel” after ending his torment with an ace after one hour 41 minutes — but there was no hint of sympathy as, 23 days before his 36th birthday, he became the oldest Wimbledon men’s singles champion.

That attitude from the third seed, who last triumphed at the All England Club five years ago, was not surprising since Federer’s dream of title number eight had been shattered by Novak Djokovic in the 2014 and 2015 finals.

His take on Cilic’s injury spoke volumes for the killer instinct that has earned him a record-extending 19 majors and taken him past American Pete Sampras’s record of seven men’s singles titles at Wimbledon in the modern era.

“I couldn’t tell what it was,” Federer said. “But if I saw him limping around, or if I saw him pull up hurt, I would start to think, maybe I’ll throw in a dropshot to really check him out, then one more, because that’s what you do.

“You need to hurt him where it hurts already.”

It was not really necessary as Federer enjoyed one of his easiest title victories.

Having reached the final without dropping a set, he was braced for Cilic’s power tools but, apart from the first four games, resistance from the Croat was about as daunting as a man brandishing a stick of celery.

In winning the tournament without the loss of a set, Federer matched the 1976 feat of Swede Bjorn Borg and his own run 10 years ago at the Australian Open.

His latest milestone continued a remarkable resurgence for Federer, who took six months off last year before returning to win the Australian Open — ending a five-year wait for an 18th grand slam many thought would remain elusive.

“I’ve got to take more time off, I don’t know!” said Federer, whose family has doubled with the addition of twins Leo and Lennart to go with twin girls Myla Rose and Charlene Riva since his 2012 title — all of whom were watching on Sunday.

For Cilic, who beat Federer in the U.S. Open semi-finals before going on to claim his sole major in 2014, his first final at the citadel of tennis, was a living nightmare.

In pain from a blister, his legs appearing tied together and his mind in turmoil, Cilic seemed on the verge of quitting as the tears flowed and the crowd murmured in embarrassment.

“I got a really bad blister,” Cilic said, explaining his mid-match meltdown that had fans nonplussed. “It didn’t hurt so much that it was putting me in tears. It was just that feeling that I wasn’t able to give the best.”

Nerves were apparent for both men as Cilic opened the 131st men’s final with a shaky service game.

Federer, who lost serve only four times in the fortnight, saved a break point at 1-2 and in the next game.

At 2-2 Cilic took a tumble to the turf trying to reach a Federer dropshot and followed that with two lame backhands to hand master front-runner Federer control.

Scenting blood, Federer polished off the first set before breaking Cilic to lead 3-0 in the second.

Cilic slumped to his chair, sobbing, as the physio and doctor stood by and for a moment it looked as though the final might end in a retirement for the first time since 1911.

Cheered on by the crowd, Cilic returned to the fray but any sense of a real match had vanished as Federer raced through the rest of the second set.

After treatment on his stinging feet, Cilic at least showed some spirit to detain Federer for 40 minutes in the third set.

But the outcome was never in doubt as the Swiss, eyes narrowing for another batch of records, broke in the seventh game before wrapping up the match with his eighth ace.