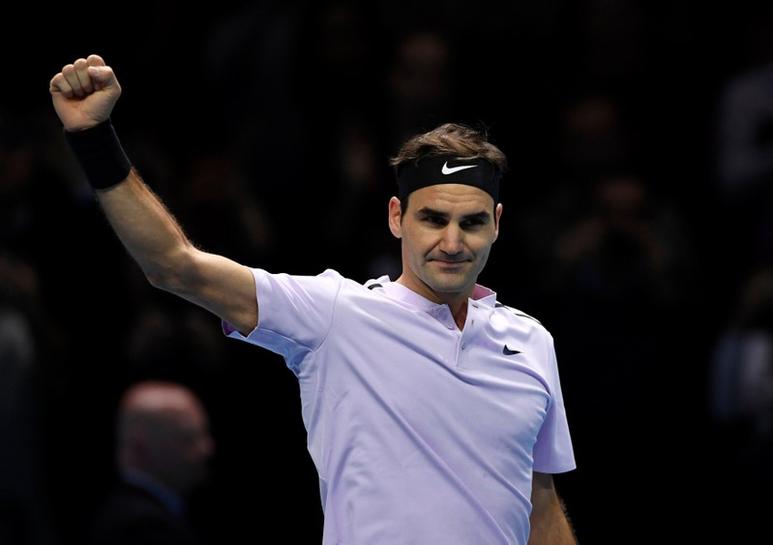 LONDON (Reuters) – Whatever else happens to Jack Sock at the ATP Finals this week, his between-the-legs volley at 4-4 in the second set of his debut match will feature in the end-of-tournament showreel.

Trouble is Roger Federer was on the other side of the net and Sock’s magic moment proved in vain as the Swiss maestro spun a backhand winner past the stranded American.

Sock, the first American to qualify for the ATP Finals since 2011, felt Federer’s winner owed a little to luck — not that the world number two needed much of that commodity to claim his 53rd career victory in the season-ender.

“It was a minor shank. I don’t know, it’s Roger I guess. He can do no wrong. Everything goes in,” Sock, who pushed the 36-year-old hard in a 6-4 7-6(4) defeat having dropped serve in the opening game, told reporters.

It was a fairly accurate description of Federer’s astonishing year in which, after a six-month lay-off at the end of 2016, he returned to win the Australian Open and Wimbledon to reach 19 grand slam titles.

His seven titles so far this season is his best return since he won eight in 2007 and few would bet against him matching that by winning the a first ATP Finals title since 2011.

Federer might have to find another gear on Tuesday, however, when he plays Germany’s Alexander Zverev who marked his ATP Finals debut with a 6-4 3-6 6-4 defeat of Marin Cilic in the day’s other Boris Becker Group match.

Not everything Federer hit went in on Sunday.

The world number two, who warmed up for London by donning a kilt in an exhibition match against Andy Murray on Tuesday, was not at his clinical best, even managing to net a close-range forehand when Sock had give up the point and turned his back.

Two stunning backhand in the opening game of the match in a packed O2 Stadium earned him the only break in a match in which Sock, and his atomic forehand, was always a threat.

Federer, the oldest qualifier since 1970, looked aghast as two break points went begging at 3-3, then another two at 4-4. Sock’s stoic resistance earned him a tiebreak but, having drawn level at 4-4 he double-faulted and Federer closed it out.

“Not a whole lot to hang my head about,” Sock said. “It was a couple of points.”

Six-times champion Federer won 29 of 32 service points in the second set but admitted it had been a tough opener.

“I had a tactical plan with my team. But very often in a first match like this, it gets thrown overboard and you’re just happy to be serving well,” he told reporters.

Sock is one of four first-time qualifiers here, having crept through the back door by winning the Paris Masters. Zverev arrived through the front door though having won five titles this year and he looked immediately at home on the big stage.

The world number three started like a house on fire, emulating Federer’s earlier feat by breaking immediately with a delicate drop-volley off a dipping return.

After taking the opening set Zverev lost his way, however, and Cilic bossed the second set.

Cilic led 3-1 in the third and was close to a double break only for Zverev to re-ignite, breaking in the sixth game with an exquisite lob even the 6ft 6ins Croat could not reach.

He then broke to love to claim victory — surely the first of many at the ATP Finals.