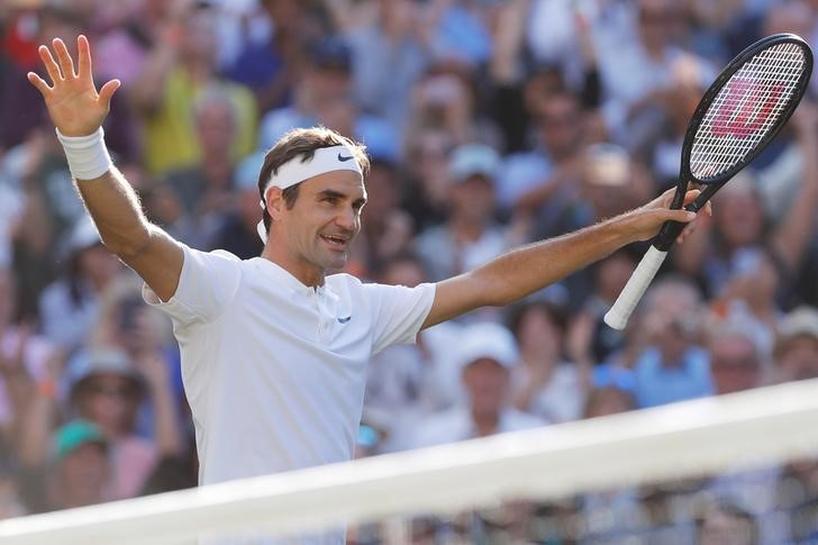 LONDON (Reuters) – The path to an eighth Wimbledon title appears wide open for Roger Federer as the Swiss goes into Friday’s semi-final against Tomas Berdych in imperious form and heavily favored to claim a record-extending 19th grand slam crown.

Federer is the only member of the so-called “big four” left in the draw after Rafa Nadal, Andy Murray and Novak Djokovic all failed to make it past the quarter-finals and few would bet against the 35-year-old from claiming victory on a surface he loves.

The third seed is two victories away from moving clear of Pete Sampras and William Renshaw at the top of the list of men’s Wimbledon champions and will meet either Croatia’s Marin Cilic or American Sam Querrey should he get past Berdych.

Federer has yet to drop a set at this year’s championships and the form guide suggests he will prevail against Berdych, with the Swiss on a seven-match winning streak against the Czech player, who has not beaten him since 2013.

For his part, 11th seed Berdych will be looking to improve on his 2010 performance when he made it all the way to the final but was beaten by Nadal in the showpiece match.

The 31-year-old has said he will attempt to play with self-belief and produce his best form against Federer but acknowledges the scale of the task ahead.

“It’s a really exceptional tennis player that we have, that our sport has right now,” he said of Federer. “There was nobody better in the past… I think he’s the greatest of them all.”

First up on Centre Court will be the semi-final between Cilic and Querrey, who conquered a hobbling world number one Murray in the quarter-finals, in a battle between monster servers.

Querrey, seeded 24th, and seventh seed Cilic are among the most prolific ace masters in the tournament, having fired down 126 and 105 respectively on their way to the last four.

Cilic, 28, will be the favorite against Querrey, who is the first American male to reach a grand slam semi-final in eight years, the Croatian enjoying a 4-0 head-to-head record against his 29-year-old opponent.

The 2014 U.S. Open champion, who said his triumph at Flushing Meadows transformed his confidence levels, believes Querrey’s lack of experience on the biggest stage could have an impact on the outcome of their match.

“Sam hasn’t been at this part of the tournament… maybe that can have a small part in playing that match,” he said.