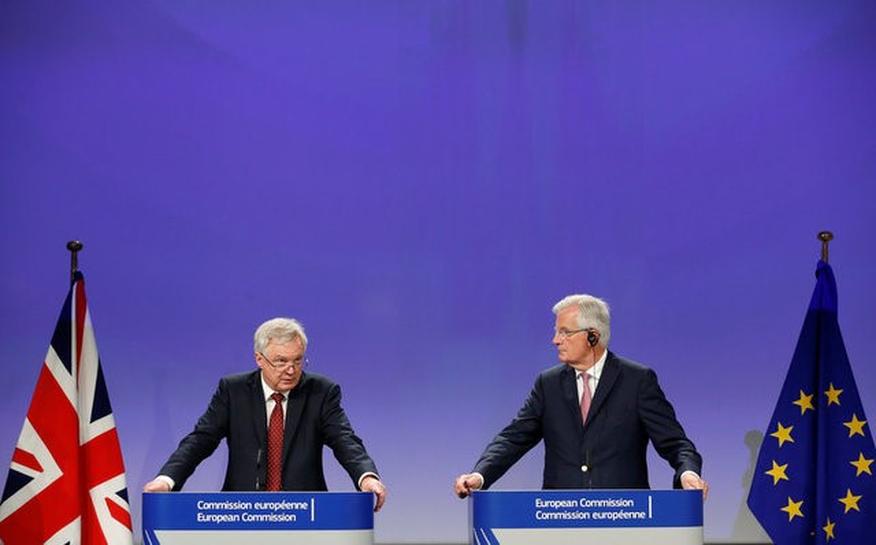 BRUSSELS/LONDON (Reuters) – The European Union and Britain offered few compromises at their first full round of Brexit talks which ended on Thursday, and the pound fell on worries that British ministers were prepared to walk away without a deal.

While negotiators laid out their disagreements in Brussels, Prime Minister Theresa May met company bosses at home, with one employers’ group saying her government needed to engage in “sustained and structured” discussions with business over Brexit and avoid an abrupt departure from the bloc.

Separately, academics warned of “widespread, damaging and pervasive” costs if Britain failed to reach at least a transitional trade deal with the EU before its scheduled departure from the bloc less than two years from now.

At the European Commission, the negotiators laid out their opening positions in four days of talks that showed some common ground.

But they also confirmed differences over how to protect the future of expatriate citizens, while uncertainty persisted over a financial settlement and the future of the Irish border, which will become an external frontier for the EU in 2019.

Chief EU negotiator Michel Barnier said there was “a fundamental divergence” on how to protect the rights of EU citizens living in Britain and of Britons in the remaining 27 EU countries after Brexit.

He said European courts should guarantee citizens’ rights after Brexit.

“Any reference to European rights imply their oversight by the Court of Justice of the European Union,” he told a joint news conference with British Brexit Secretary David Davis.

Britain, however, says people voted in last year’s Brexit referendum to end shared EU sovereignty, and its judges should therefore have jurisdiction.

Barnier also called for more clarity on the British position on the financial settlement. Brussels says London must pay a share of money the EU committed to spend when Britain was a member. The EU executive has floated a ballpark figure of about 60 billion euros (53.98 billion pounds).

Davis said the meetings in Brussels had provided “a lot to be positive about”. But when asked if Britain would accept the principle of a net payment from London to Brussels – and not vice versa as some British ministers have suggested – he gave no direct answer.

Barnier called on Britain to clarify at the next round of talks in August how it would maintain a common travel area with the Republic of Ireland, which will remain in the EU.

Both sides have said they want to avoid reimposition of border controls between the republic and British-ruled Northern Ireland. However, so far neither has proposed a solution to an issue that remains sensitive almost two decades after a peace deal ended years of violence in the province.

British international trade minister Liam Fox said a trade deal with the EU should be “one of the easiest in human history” to reach, although his country could manage without one if necessary.

Sterling fell on concern about Brexit talks ending without a deal, something many economists have warned could cripple business activity. It dropped 1.4 percent on the day to an eight-month low against a rallying euro.

Fox, a eurosceptic who campaigned for Brexit last year, said a trade deal should be simple because the two sides already have similar regulatory rules and no tariffs.

But he told BBC radio that Britain could survive without a deal, in comments that contrast to finance minister Philip Hammond, who has said that no agreement with the largest trading bloc in the world would be a “very, very bad outcome”.

Fox questioned how much damage would be done if Britain and the EU ended up trading on the basis of their agreements at the World Trade Organization, with no special access.

“People talk about the WTO (scenario) as if it would be the end of the world,” he told Reuters in an interview. “But they forget that is how they currently trade with the United States, with China, with Japan, with India, with the Gulf, and our trading relationship is strong and healthy.”

In Brussels, Davis played down talk of no agreement, saying that while Britain would never accept a “punishment deal”, he saw no reason to think the EU would try to push such an outcome.

Divisions within May’s government, including over Brexit, have spilled out since her Conservative Party lost its majority in a parliamentary election last month.

At the first meeting of a new business council, May stated her goal was “a smooth, orderly exit culminating in a comprehensive free trade deal with the EU, with a period of implementation in order to avoid any cliff-edges”, a spokesman said.

Before the meeting, the Institute of Directors association reported that only 11 percent of its members had begun implementing Brexit contingency plans, while 30 percent were considering their options but had yet to act.

A separate group, the British Chambers of Commerce (BCC), called on the government to hold top-level talks with business “on the dozens of practical, real-world questions that firms face as a consequence of Brexit”.

“The prospect of multiple, costly adjustments to trading conditions is a concern for many, so starting discussions on transition arrangements as soon as possible would go a long way to boost business confidence,” BCC President Francis Martin said in a statement.

Major banks have begun to move staff from London to the continent so they can keep selling financial services to EU clients. The policy chief of the city’s financial district has told Reuters that Britain must negotiate a staggered departure in the next few months or risk seeing thousands of finance jobs move abroad.

Anand Menon, a politics professor at King’s College London who directs a Brexit research group, said a failure to reach a deal with the EU would be highly costly.

“Our findings show a chaotic Brexit would, at least in the short term, spawn a political mess, a legal morass and an economic disaster,” he said.