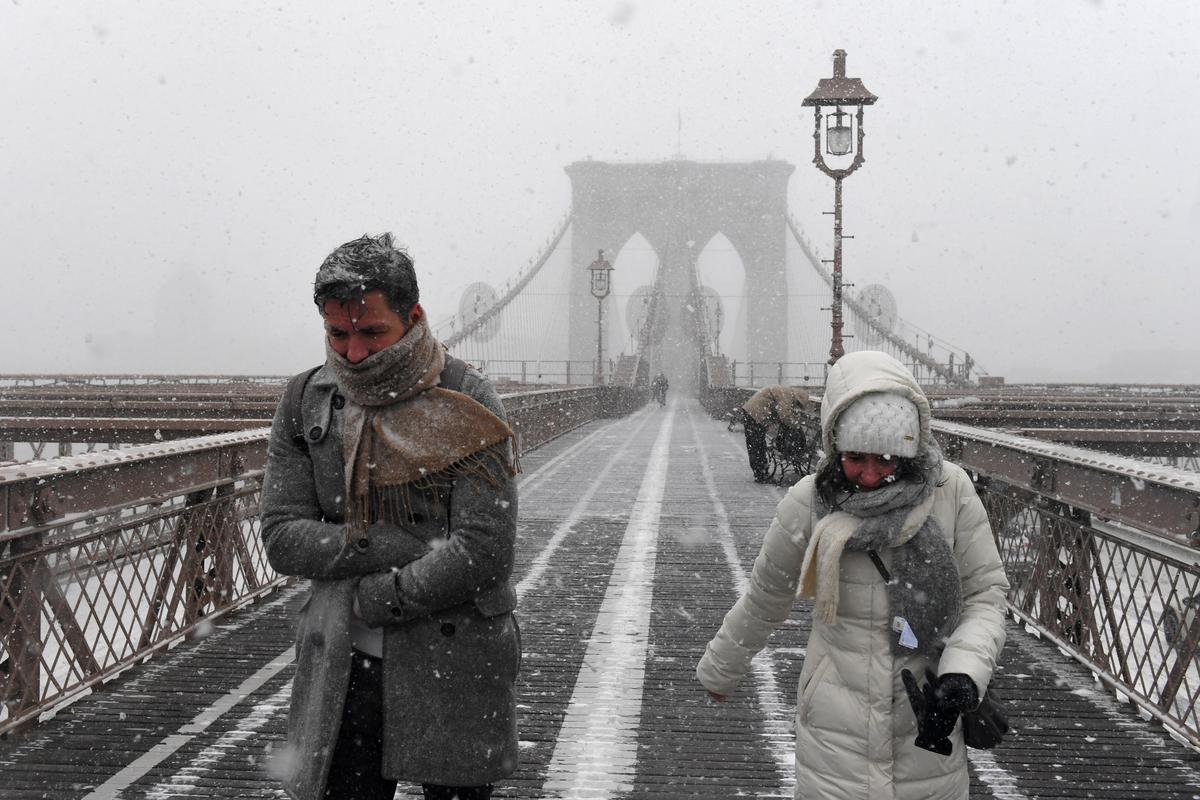 BOSTON/NEW YORK (Reuters) – A powerful blizzard battered the Northeast on Thursday, knocking out power for tens of thousands of people and snarling travel amid a long cold snap that has gripped much of the United States for more than a week and killed more than a dozen people.

Commuters who braved the storm in the morning worried that they could be stranded during the storm’s peak expected later in the day.

“I don’t know where I’ll stay tonight if I get stuck, probably with my boss,” said Ran Richardson, 55, of Malden, Massachusetts, as he waited for a Boston subway to take him to training for his job as a Chinese-English translator.

Schools were ordered closed in New York City, many parts of New Jersey, Boston and elsewhere throughout the region.

Blizzard warnings were in effect along the East Coast from North Carolina to Maine. The National Weather Service forecast winds as high as 70 miles per hour (113 km per hour), which downed power lines.

Some 65,000 homes and businesses in the Northeast were without power, though that number was expected to rise as the storm intensified across the region.

More than a foot (30 cm) of snow was forecast for Boston and coastal areas of northern New England, with as much as 3 inches (7.6 cm) per hour forecast, a pace that made it difficult for plow crews to keep roads clear. Officials feared that fast-dropping temperatures after the storm passed would turn remaining snow on roadways to ice.

The storm was powered by a rapid plunge in barometric pressure that some weather forecasters were referring to as bombogenesis or a “bomb cyclone” and which brought fast, heavy snowfall and high winds.

The bombogenesis phenomenon occurs when a storm’s barometric pressure drops 24 millibars in 24 hours.

The wintry weather has been blamed for at least 13 deaths in the past few days, including three fatalities in North Carolina traffic accidents and three in Texas due to cold.

At those airports, the metropolitan area’s third major airport in Newark, New Jersey, and Boston’s Logan International Airport, as many as three out of four flights were called off, according to tracking service FlightAware.com.

“The MBTA is always going to have problems because so much of its track is outdoors,” said Mitchell Moss, a professor of urban policy and planning at New York University who is an expert on transit issues. Frozen switches and high winds interfere with above-ground train operations, he said.

Officials reported road accidents throughout the Northeast, including in Manchester, New Hampshire, where a 32-year-old woman crashed a vehicle through the wall of a nursing home, according to local police. No one was injured in the incident.

In the Southeast, historic cities saw their heaviest snowfall in nearly 30 years on Wednesday, according to AccuWeather.com senior meteorologist Alan Reppert. Charleston, South Carolina, received 5.3 inches (13.46 cm) of accumulation, within an inch of its record.

Thursday’s power outages raised fears that people would be left without electricity and heat on Friday and during the weekend when temperatures are forecast to plunge.

“Due to strong wind gusts, any power outages are expected to be prolonged because bucket trucks cannot withstand the winds,” Connecticut Governor Dannel Malloy told reporters.