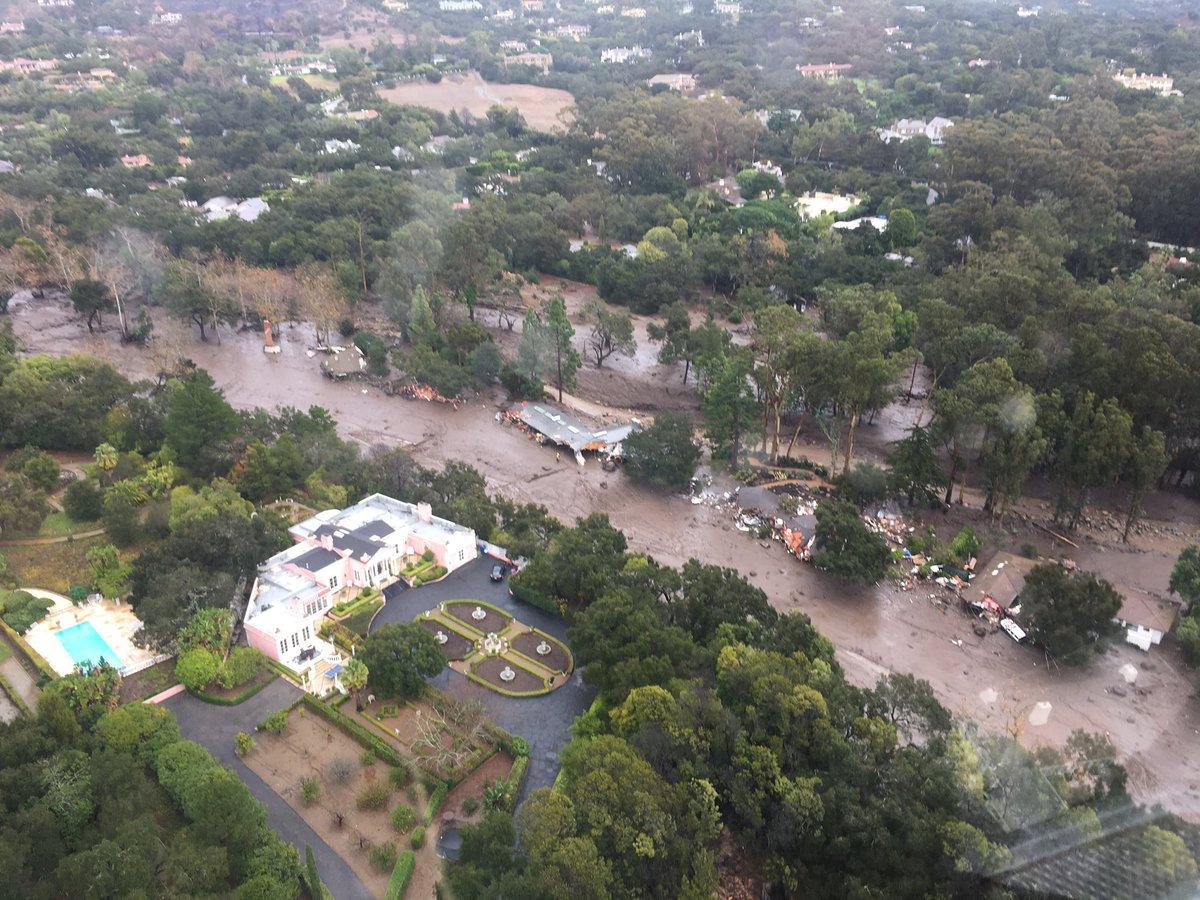 The area, sandwiched between the ocean and the sprawling Los Padres National Forest, is home to celebrities including Oprah Winfrey and Ellen DeGeneres, who relish its natural beauty and proximity to sprawling Los Angeles.

But the wooded hillsides that once gave their estates a sense of seclusion were largely denuded by last year’s historic wildfires, setting the stage for the massive slides that slammed into homes, turned highways into raging rivers and swept away vehicles after heavy Tuesday rains.

Houses could be seen surrounded by several feet of mud.

“We’re finding people continuously,” said Yaneris Muniz, spokeswoman for the Santa Barbara County Joint Information Center. “We had a helicopter and several crews out all night, and now that it’s day, we’ll be able to intensify those searches.”

Officials have ordered residents in a large swath of Montecito to stay in their homes so that rescuers can better go about their work.

About 300 people were stranded in a canyon. Local rescue crews, using borrowed helicopters from the U.S. Coast Guard, worked to airlift them out, officials said.

The county initially ordered 7,000 residents to evacuate and urged another 23,000 to do so voluntarily, but only 10 to 15 percent complied with mandatory orders, said Amber Anderson, a spokeswoman for the Santa Barbara County Fire Department.

“We don’t know how many additional people are still trapped,” Santa Barbara County Sheriff Bill Brown said on the “CBS This Morning” program. “We know there are some, and we’re still making our way into certain areas of Montecito and the adjacent areas to determine if anyone is still there and still alive.”

Brown likened the devastation wreaked by the mudslides to that seen on the battlefields of World War One.

The mudslides followed an ordeal of fire and water for the area northwest of Los Angeles. A torrential downpour on Tuesday soaked the area, which was left vulnerable after much of its vegetation burned in the state’s largest wildfire last month.

“Mourning the dead in our little town tonight. Praying for the survivors and preparing for whatever may come. #Montecito,” actor Rob Lowe, who lives in the area, wrote on Twitter.

A 14-year-old girl was found alive on Tuesday after firefighters using rescue dogs heard cries for help from what was left of her Montecito home, the Los Angeles Times reported.

“I thought I was dead there for a minute,” the teenager Lauren Cantin, covered in mud, told NBC News after workers spent six hours rescuing her.

Rescuers worked through the night, searching for victims amid the dozens of homes that were destroyed, and using helicopters to lift more than 50 stranded residents from the mud.

The number of fatalities surpassed the death toll from a California mudslide on Jan. 10, 2005, when 10 people were killed as a hillside gave way in the town of La Conchita, less than 20 miles (30 km) south of the latest disaster.

Last month’s wildfires, including the sprawling 273,400-acre (110,640-hectare) Thomas Fire, which became the largest in California history, left the area vulnerable to mudslides. The fires burned away grass and shrubs that held the soil in place and also baked a waxy layer into the earth that prevents water from sinking deeply into the ground.

Some residents had to flee their homes due to the fires last month and again this week because of the rains.

Leaders of Singapore, Malaysia hold talks on HSR project; announcement on further details to be ‘made in due course’
Woman to be charged for suspected involvement in death of ex-boyfriend
1,075 new COVID-19 cases and 11 deaths in Malaysia
Indian government to meet protesting farmers again as talks continue
New stamps featuring maps of early Singapore to be released