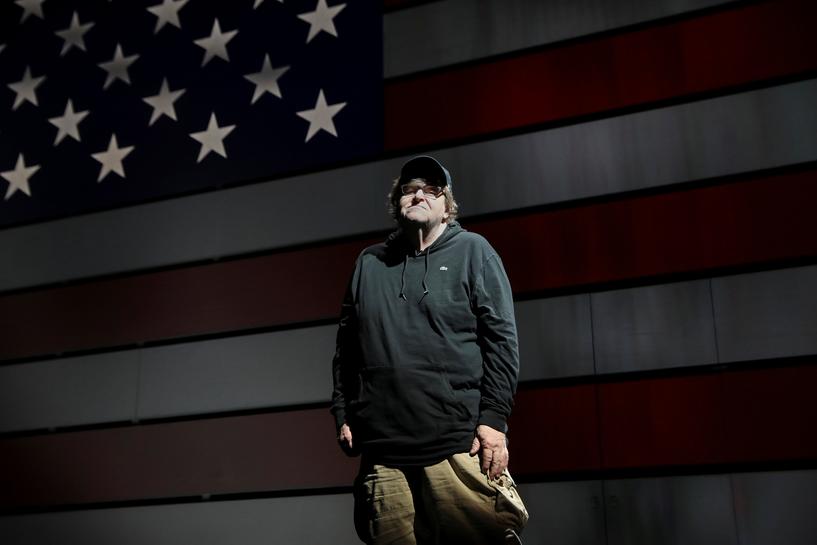 NEW YORK (Reuters) – Documentary filmmaker Michael Moore is trading screen time for the stage in a one-man show now on Broadway that is a call to action over the current state of U.S. politics.

The show, “The Terms of My Surrender,” uses Moore’s satirical brand of humor to target U.S. President Donald Trump and encourage liberals to turn resentment over Trump and the Republican political agenda into actual resistance.

“This guy’s going to get us all killed. There’s nobody in charge. This man (Trump) has the nuclear codes,” Moore, 63, told Reuters Television in an interview on Thursday.

“I’m hoping somebody in the Pentagon is protecting us. Like, whatever’s in that nuclear briefcase it’s just some girlfriend’s phone number or something. I’m just hoping that it’s not the real numbers because we’re in desperate shape here,” said Moore, a longtime liberal and a harsh critic of Trump.

Moore’s show varies each night. On Tuesday, he invited the audience to board buses and join him after the performance in a wider protest under way outside Trump Tower on nearby Fifth Avenue in Manhattan, where the president had arrived a day earlier to stay at his high-rise home for the first time since taking office in January.

Michael Moore poses for a portrait at the site of his one-man Broadway show at the Belasco Theatre in Manhattan, New York, U.S., August 17, 2017.Shannon Stapleton

Moore, who won an Oscar in 2003 for his gun violence documentary “Bowling for Columbine,” said he had always wanted to bring the ideas from his films to a live theater audience.

“By the end of this run, 100,000 people would have seen the show. And each of them will tell 10 people things I said or did here tonight. That’s a million people I’ve reached through a Broadway show,” he said.

Moore said that far from being depressed by the actions of Trump and events in Washington in the two weeks since starting the show, he has drawn strength from his appearances.

“Every night, when I leave here, I feel like my soul has been healed a little, that I have less despair, that I’m a little bit more hopeful that we’re going to figure this out,” he said.

“The Terms of My Surrender” is scheduled to run at the Belasco Theatre in New York until Oct. 22.